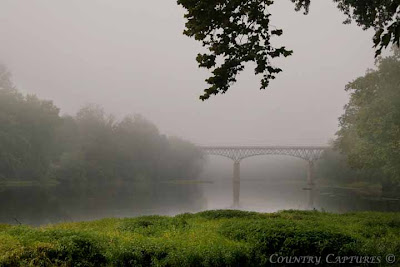 The US 522 bridge lies shrouded in the morning fog as the Potomac River glides quietly beneath its strong girders.

A motel at the north end of the bridge became the site of a “hostage” situation a few weeks ago. Police were notified that a wanted man and his pregnant girlfriend had checked in at the motel. Upon officer’s arrival the criminal informed police that he was armed and that he was holding his girlfriend hostage.

For two days this bridge between Maryland and West Virginia was closed forcing people to detour 70 miles out of their way. One health care worker was reported to have swum the river rather than make the long drive around.

The situation was finally resolved peacefully only to find that the “hostage” was in fact a willing collaborator and that the couple was unarmed the entire time.
Posted by Coy Hill at 9/17/2008 08:19:00 PM

That does look peaceful..but what is wrong with people to tie up valuable resources like that..

I don't know if you have any idea, but I wondered why the woody hen was able to raise 8 ducklings to flight while the mallard hens here average 2 to flight. It's strange, but last year also, both woodie hens were more successful here on the pond...

What an absolutely beautiful and peaceful scene. The story is ridiculous and annoying. Hate that is has something to do with this lovely scene, but that's life.

The scene is beyond words. The photographer did his duty. That part is really beautiful. The description though is different. An unarmed hostage closes a highway for two days. I hope one of those cops slapped him silly after it was over.

Salty: Interesting story and a neat photo of the bridge.

Picture perfect photo Salty.
I guess one can't be too careful but 2 days of a major artery closed doesn't seem quite right to me.

The picture is delightful Salty... and the story a sad sign of the times.

Wow Salty, I think this has to be one of my favorites! I LOVE Foggy scenes but have BIG problems trying to capture them.