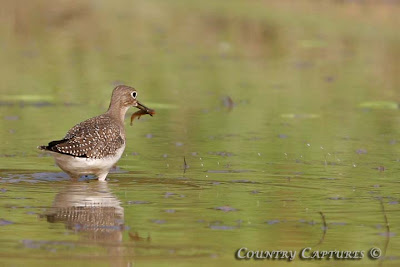 As you all can tell, I have been found considerable enjoyment shooting the various creatures of the wetlands this summer.

I am particularly pleased to have captured this Solitary Sandpiper moments after it captured either a salamander or a tadpole that had began to develop legs.

As the dry weather took its toll on the wetlands, the water life continued to be concentrated into an ever smaller areas. This in turn created a feeding bonanza, attracting many species of birds to its shallow waters.

Tropical storm Hanna dropped a couple of inches of much needed rainfall on our area yesterday. The wetlands should be benefiting from the additional water.
Posted by Coy Hill at 9/07/2008 08:57:00 PM

Beautiful photo. I like how you caught the bird's reflection in the water. So much motion to this shot.

We expected rain from Hannah but didn't get any. Eastern part of the state got tons of rain.

I am happy for the area for the sake of the wildlife and the plants and trees that you all got a couple of inches of much-needed rain. We are still down this summer/fall on the rains but still have hope and say prayers for some for ourselves. It has been dry here this last month and so far this month. Though we did get 1/2 inch over a 24 hour period.

Nice shot of this sandpiper.

Salty: A wonderful capture of the Sandpiper feeding.

You captured the meal time so well... we get Sand Pipers over here but I've not seen one for a while now.

Perfect action shot. I like the way you captured the Piper and his juicy morsel.

this is a great shot. Nice catch of the Sandpiper with dinner.

Another good one, Dad.

Glad you got some rain and got such a good shot...