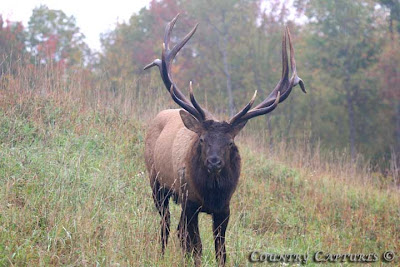 This was the first bull we encountered on Winslow Hill upon my arrival Monday morning. He was pacing the length of a meadow alternating between bugling and feeding.

Soon I was to learn that he was a satellite bull, circling the harem but never daring to spend much time with the cows lest the dominate herd bull catch him.

Fighting between these animals is dangerous. Most disputes are settled with posturing and intimidation rather than combat. This bull did not question the dominate bull’s authority during the time I spent with these animals, giving way each time the herd bull arrived upon the scene. As with most bulls on Winslow Hill this bull was quite tolerant of people.
Posted by Coy Hill at 10/05/2008 07:54:00 PM

This is a nice photograph. I like the story with it too.

Great shot. Looks like a strong and powerful bull :-)

I put up one of my latest elk photos from last week. They sure are gorgeous photos!!

Salty: What a marvelous bull with an outstanding set of horns.

Amazing photograph... I love the information you included with this... how many times have I been out fishing or hiking the mountains and seen these magnificent animals and knew not much about them, but NOW I do thanks to you...

Also thanks for dropping my blog in the last little while and the support for while I was down and out with my accident... I really do appreciate it. It meant so much to me. I hope to make a full recovery soon. Thanks again.