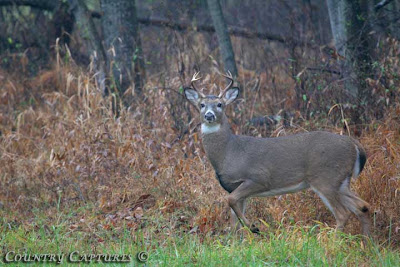 I have had the pleasure of spending the last week in the fields collecting autumn images with my primary focus being on the whitetail rut. Each morning I was out before dawn retuning home for a short time around midday and then returning to the outdoors in the early afternoon, staying until dark. Two days were the exception; these were the two days I traveled to Shenandoah National Park for morning shoots.

I photographed this young buck in Pennsylvania during a light rain Friday morning. The rain arrived here Thursday morning and stayed with us until late Saturday evening.

Looking at this young buck I think of how risky life for him is at this time. Archery season, although closed now was open for six weeks. Pa’s archery season now extends well into the rut. Archery hunting interest is much higher than it was in years past when the season ended before the rut began. Poachers are also busy killing this year’s crop of deer. Each evening as dusk falls lone rifle shots echo through the valleys and against the mountainsides. There is no doubt that the majority of these shots are directed at deer as they enter the fields to feed. Some feel that it is their “right” to kill the nice bucks before the “city people” arrived for legal hunting season. Others are farmers who feel that they have raised the deer and have a “right” to kill the big buck before anyone else can get to him. Others from outside of our area will drive slowly along our country roads, shoving the rifle out the window and killing whenever and wherever they have the opportunity. Finally then we have the “Jacklighters” who shine the deer with powerful spotlights shooting at them all hours of the night.

In just two weeks the Pa rut photography will end with the beginning of the annual rifle season. Only a very few fortunate individual bucks ever live to become mature and those that do find their life more and more risky as their racks increase in size.

While I personally do not hunt, I respect the right of those who do it legally. On the other hand, I have no problem in turning in folks that I see who are doing it illegally. Here in Georgia, the Game Wardens consider out of season hunting a form of poaching and prosecute it fully.

Thanks for posting such wonderful photos. I spotted a few small bucks and does last week in North Carolina, but with hunting season in full swing here in Georgia, they are laying low.

These animals are so beautiful!!

Gosh, that is one amazing animal. He is beautiful. I, myself am no hunter and will only shoot with a camera!
~Michele~

It would be difficult to witness and photograph all that beauty and know it will be gone in a few weeks. The poachers, especially make me angry. Who do they think they are? But having dealt with humans my whole life, why should I be surprised. Most are not bad, but there is a segment that more than makes up for the ones who are not bad.

It's a little nerve wracking by my hubby's hunting property right now - just driving the 5 mile 2-track road to get back there is a little frightening as it seems everyone is shooting at anything that moves. I think if you are a true "deer hunter" and sportsman - you obey the rules, exercise caution and not hunt earlier than you're suppose to.

What a beautiful buck!

You captured a beautiful creature. I hope he makes it through the season.
Poachers can't be tolerated.

Salty: That looks like a big deer with not that big a rack. I know sometime it's just the deer's heritage.

It's a rough life, and from the narrative of your post, I certainly look at that photo much differently had I seen it without that story line. Nice work.

Poaching is really awful but I guess some people would not otherwise have food to eat. An all-round sad affair. Thanks for sharing Coy.