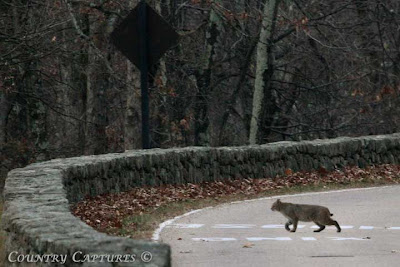 Not a great photo
Driving north on Skyline Drive I happened to look in the rear-view mirror as we were descending the grade just north of the Big Meadows. I was astonished to see this bobcat getting up from the road ditch where it apparently had crouched as we drove by.

It stepped out into the road and began walking away as I brought the car to a stop. Willard and I both tried our best to get our cameras into action as the cat walked across the road and hopped over the stone wall. It was only later that I realized that the cat had crossed the road at a designated crosswalk!

Now that is amazing as those animals are so threatened...what a catch Coy!!

What luck!! I have learnt to always check in my rearview mirror as the cats, especially leopard, will always do this. Only problem is, I never get a shot of it. LOL!!

Great luck Salty.
PS, maybe it thought that the crosswalk was a catwalk ;-D

That had to be exciting, I know I would be calling and telling everyone I know what I had just seen. What a beautiful animal.

That's one smart bobcat to use the crosswalk!! Great shot! I do worry about them - their population is down in michigan as well. I saw my 1st one on my hubby's hunting property as he was laying out his deer feed. The bobcat peeked his head over a log and tilted his head to look at me (like a housecat would) - then he ran across the field. It was thrilling!

Salty: Neat capture of the elusive animal. My sister lives in New Castle, PA and she has a Bobcat that runs in her backyard.

Sometimes we don't see what is in front of us until we get it on the computer. LOL, he read the road signs.

Really cool shot Salty. Glad you were able to catch it in your lens. Fun to see it walking in the designated crosswalk.

WOW! What a fabulous capture and experience!! How funny that it crossed at the cross walk! What are the odds??

great catch. My not be your best photo but I am amazed how quick you were to catch it.

OH WOW! I've never seen a bobcat in real life. I am very impressed that you acted quickly enough to catch its photo!

We don't see these in Muskoka! What great luck not only to see it, but to capture the photo as well!

It's the speed of the capture that counts - not the quality.

WOW! Wonder if it looked both ways too?

Hilarious. My dog escaped out of the front door having spotted a cat across the road...he swerved sideways and crossed at the pedestrian crossing before giving chase to the cat.

Followed you here through David!

Those guys are always jumping out in front of my car, that- foxes and coyotes... oy my chickens and cats!!!

Nice photo and too funny he used the crosswalk!
Slainte~
Rachelle