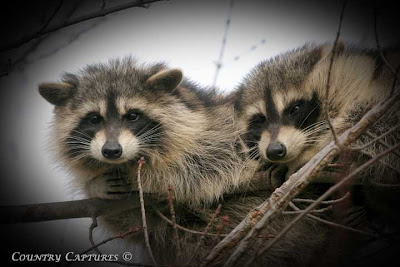 Realizing that these Raccoons were presenting me with a unique photo-op, I photographed them a number of times throughout the day.

I was less than satisfied with the background of sky and twigs in this photo series. Positioned as they were it was impossible for me to put them against a different background. To make the best of a difficult situation I decided to use Photoshop to create a dark background fading to the properly exposed subject. I hope you like the effect.

Some have noted what a pest raccoons can be and it is true but I have not had any problem with them as I do not have anything outdoors for them to cause problems with.
Also the rabies problem was mentioned. We do have some rabies in our area and it would be unwise to handle a sick acting animal. This pair of raccoons appeared fat and healthy.

I do love your photoshop effect on these masked bandits!

Sometimes the backgrounds are cluttered but we make the best of the situation. I like the shot, especially the eye contact. Blue Skies.

I, too, like the photoshop effect, Salty. I realize these little buggers can be a nusance but I really don't mind them hanging out around my place. I have, however, seen odd acting ones in the middle of the day that I suspect were not healthy. They sure do make interesting photography subjects! Hope you and Mrs. Salty are staying warm with our frigid temps.

I think these racoons are very cute and you did a great job with making the image stand out by putting that dark ring around it. I was also wondering what made them climb up the tree when they could be cuddled up snug and warm somewhere, maybe the one went after a bird or something and the other followed suit to get a bite too but the bird got away or else you would have seen feathers underneath. There is always much to speculate on with these kind of photographs. Great posts Coy!!

Such a great opportunity, and you did great with what you had.

Salty: A wonderful series, I've been busy with the meme's but am glad I got to catch-up with these neat shots.

Oh I have LOVED your Raccoon series! And what you did with the background was perfect! I really need to perfect my PS skills!

Raccoons can be pests but I haven't had any problems with them either. Neighbours complain that they get into their trash, though. Still, they are cute.

Coy..not everyone has the raccoon rabies problem we do because our state didn't get going on the problem with bait vaccine soon enough. It's a shame as I always enjoyed watching them at our cabin as a child...