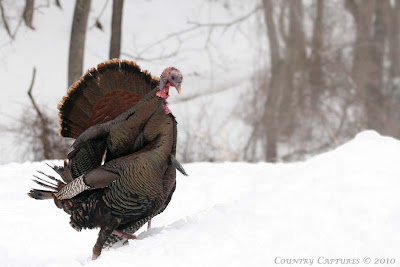 As the fight continued it was evident that both toms were tiring. The fighting became less frantic although the serious intent of the birds did not diminish 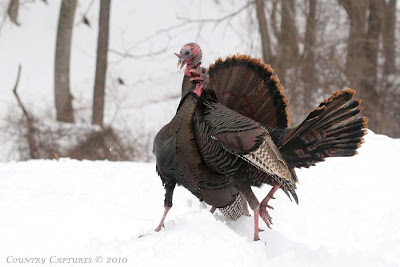 During this phase of the fight the stronger bird expended considerable effort in attempts to force his opponent to the ground. 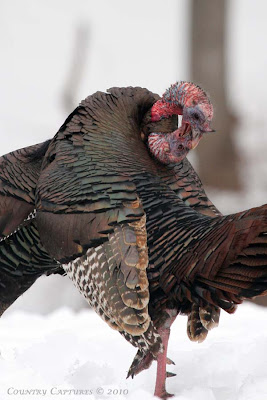 Once again grappling his opponent’s head the stronger bird forced its head down onto its back. Note the severe neck twist captured here 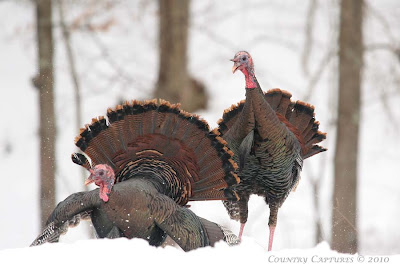 After a few moments of struggling the weaker gobbler collapsed on the snow with outstretched wings as the winner looks on. 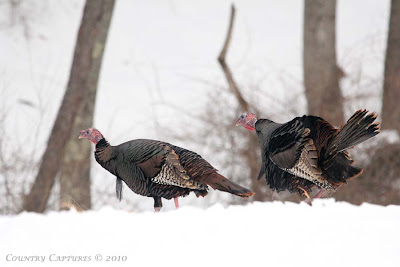 After resting for a minute and regaining his composure the losing bird arose, walking away from the arena of combat escorted by the proud victor.

Checking the photograph’s time code revealed that this fight had raged for 19 minutes.

Brad Myers asked in one comment what I will do to top this. I don’t know Brad but I am sure that in due time another surprising and exciting wildlife experience will occur; that is what keeps me going back to the outdoors every chance I get!

WOW and WOW again! No kidding, surprising and exciting wildlife adventure. Glad you recorded and showed it to us.

Salty: You did a wonderful job of capturing the neat birds fighting for their rights.

Wow, what a cool sight to see. Great photos!

This is simply a superb adventure you got, and the pictures are wonderful and astonishing. Well done Coy!

Oh to be in the right place at the right time!
As someone who loves watching Nation Geographic programs, this is right up there with the best of them! I read right back to the beginning and loved the whole thing.
It is so nice of you to share your photos and experiences.
Judith

Whether you top this or not,these are spectacular shots.Having said that .I am looking forward to your next great capture.
Blessings,Ruth

I don't know Coy it is going to be real hard to top this one. What an amazing encounter, I got excited just reading the story and looking at the photographs. I would say you guys are lucky, but you go along way in creating that luck by having knowledge of the animals and being in the field.

Willard said you had some interesting stuff. :)
Terrific shots!
Thanks for sharing your adventure with us.
Carletta’s Captures.

I know it is the way things are, but I can't help but feel sorry for loser in this battle. What a great 19 minutes of photo ops! You did good! ~karen

Nice post, Coy. I would love to see a wild turkey land in my backyard. LOL

My wife thinks I have lost my mind when I could through the house and say, "I don't see the bald eagle anywhere."

This whole Wild Turkey series you've posted has been stunning and simply amazing. Thank you for sharing it with us!

These are priceless! It's what we yearn to see, hear, photograph! These were so cool to see and to learn from. I never knew! Thanks!

I thoroughly enjoyed this series on the turkey fight. Your photography is supurb as always. Thanks for sharing this unusual encounter with us.

Enjoyed catching up. Great series. Not everyone has seen let along photography this behavior. Blue Skies.