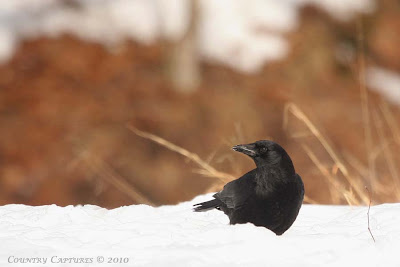 Once again I had the opportunity to photograph a crow on snow at a reasonable distance. For this shot I set the exposure compensation at +1.7 step.

I recently read an article which explained that most digital cameras will record detail in the brightest area of the image by spot metering on the bright area then compensating +2. In this case I was using evaluative metering which was also taking the crow & background into account. Without compensating the exposure this image would have exposed the snow gray with a black crow devoid of detail 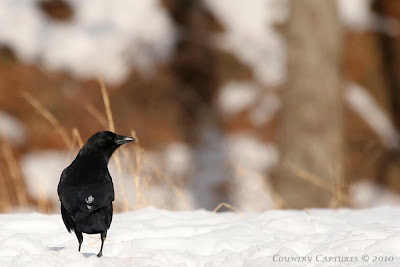 I noticed as this crow landed that it had an unusual white mark on a couple of its feathers but I was unsure of the cause until I reviewed the images later. 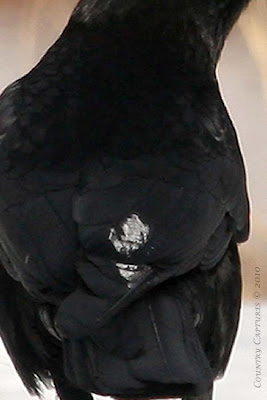 A very tight crop of the image reveals that our crow obviously was not the Top Crow on the Roost :)

Love the photos and the added humor of the "mystery of the white mark" - although I bet the crow wasn't amused :)

I was wondering if you've ever seen/heard fish crows in your neck of the woods? They look like American crows but have a very different caw, almost like a squeaky toy. I've noticed some around here now that I think to listen to them. Some think that since West Nile became an issue, the fish crow is expanding its range because it is more resistant than the American crows.

Fantastic post once again Coy. I love the second picture, it is really well composed.

Very nice shots! Black birds are a challenge and you definitely met that challenge with these shots.

I assume you have seen some of my crow photos, Coy? I have had some good luck with them over the years but not much lately. These are nice pictures.

I read your comment about spot metering. If I tried everything I read in magazines or on the internet about how to take pictures I wouldn't get anything taken. I just read some things in a new issue of Photo World. Now I know why I am letting the subscription expire. LOL

Guess he got put in his place! Good shots.