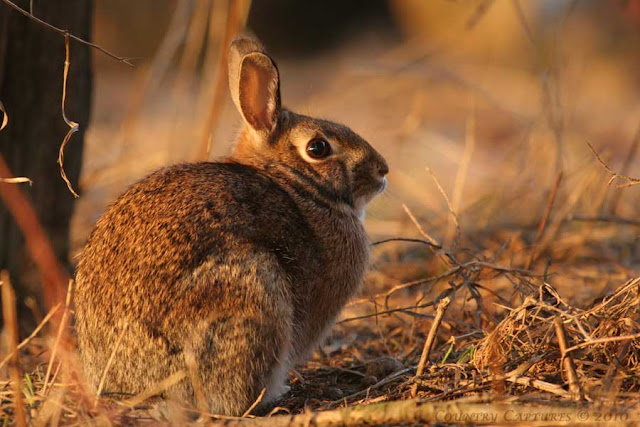 With the warmer weather we experienced this past week my wife & I took a walk by a neighboring farm one evening near sundown. As we were walking along we spied this pretty cottontail sitting under some overhanging evergreens along the roadside with low angle sunlight illuminating it perfectly. I snapped a few shots and then began moving closer, and closer, and closer until I was so close that the rabbit filled the viewfinder. 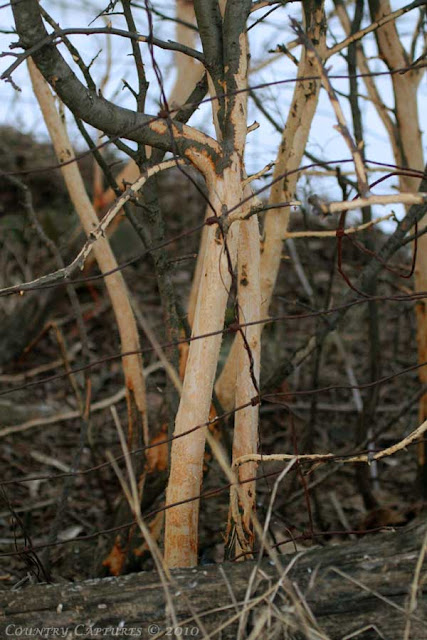 After getting the shot we walked on. Upon our return our neighbor was standing along the road and commented on the “big” camera I was carrying. Turning on the LCD I showed him what I had been shooting. With a chuckle he invited us in around the building to see where the rabbits had been feeding on tree bark while the ground was covered in deep snow.

This is a shot of what he identified as apple saplings that the rabbits had completely girdled. During periods of snow cover when cottontails cannot feed on grasses and other plants they will commonly feed on the nutritious cambium layer of woody plants while normally avoiding thick rough bark. These trees appear to have been damaged sufficiently that they will only grow from beneath the girdled area.

I hope you all like Country Captures' new look. After finding the new Blogger post editor Friday evening I began looking for a new template that would accommodate the larger picture size afforded by the post editor. After picking one and setting up a test blog to play with I happened to hop over to Abe Lincoln’s Pick a Peck of Pixels and low and behold he was posting about an all new Blogger in draft dashboard with new easily customizable templates. The new features offered there allowed me to easily give Country Capture a whole new make-over.
Posted by Coy Hill at 3/14/2010 06:56:00 PM

I do like the new look.Guess I'll have to do some experimenting with my test blog.Cute bunny too.
Blessings,Ruth

thanks coy for your comment on my blog...i love to learn and you and willard i am sure are a wealth of info...tell me though why was the meat inside still pink if it was an old kill? love your photography. what lens do you use? those geese are spectacular and the bunny is precious...i love the yellow afternoon light.

I wrote a bit about you trying out the Blogger template machine on my Birds Blog. Not much but something.

And, rabbits around here eat all the branches they can reach on several bushes -- those with bright red leaves in the fall -- people use them as focal points in their yards. If they eat the buds off of younger ones, then the bush will be more compact than a human being could ever trim them to be.

Hi Coy,
Beautiful bunny picture and the new look of your blog is superb!!

Love the new look - I added a new background to my blog recently, but have often wished I could post my photos "bigger" - I'll have to play around a bit with it.

Very interesting post..... I have never noticed anything like this with trees before... unless I just thought the grey squirrels had been at work.

The layout is great Coy.... and what a star that man man Abe is.... a really inspiration on many levels.

It's almost time to see the bunnies with Easter around the corner. LOL. Anyway, great photo.