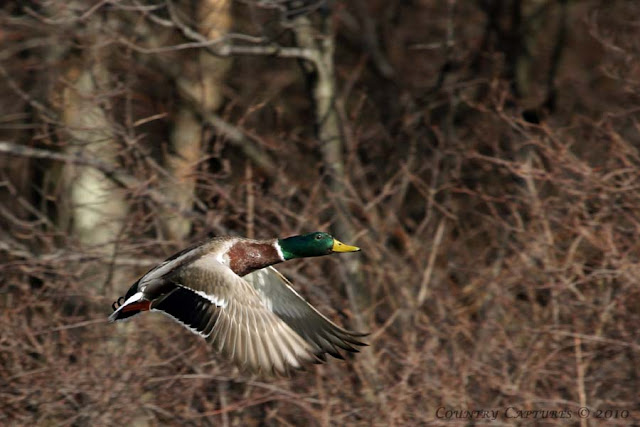 As common as Mallards are I cannot allow one to pass close by without attempting to capture a good image of it on the wing.
Often it is difficult to achieve good focus against a cluttered background as there is much more background for the autofocus to lock on than there is subject.

Most shots get the delete treatment but in this shot everything came together capturing this male mallard frozen against a background of leafless underbrush. 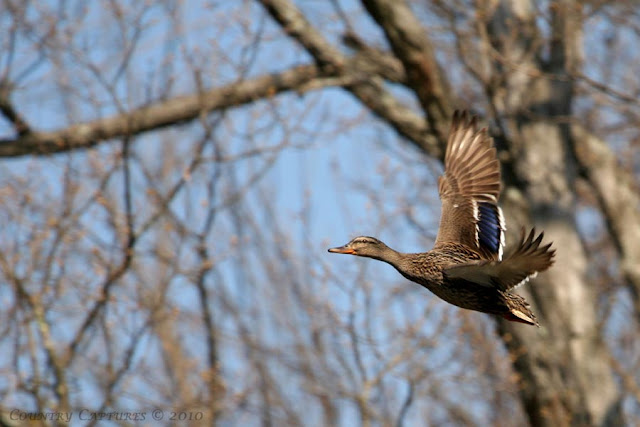 A mallard female zooms by as she attempts to catch up with her mate. Although not as colorful as her male counterpart her subdued colors are beautiful none the less.


I haven’t found any sign of the mallards incubating yet but from their activity I am fairly certain that egg laying has began.
Posted by Coy Hill at 4/12/2010 08:54:00 PM

As I know all too well how difficult it is to get these shots,I am very impressed with your pictures.I should not be surprised as you photos are all great.
Blessings,Ruth

These really Are impressive....I have deleted many pics because the camera focused on the cluttered background rather than the bird I was trying to capture....it isn't an easy task by any means.

These mallards are beautiful and you were able to freeze the motion perfectly. This is something I've been trying to perfect myself and I finally was able to get some awesome closeup shots of a ruby-throated hummingbird with his wings completely frozen in motion and I was so happy, since this has been my goal. I posted them on my blog if you'd like to take a look. I am really proud of them! LOL Your photography really inspires me to keep practicing!

You did a fantastic job of capturing the Mallards! They zip along at such speed it is really hard to get the focus on them. Excellent shots.

I can relate Coy, they are at the water spots I frequent all the time but if they fly I am always trying to capture there beauty.

The egg laying has begun in my neighborhood. We have mallards that live around our houses and use our pool in the spring. I have to hose off some crap when they are gone, but it is worth it.

Beautiful flight shots Coy... yes I guess they will start to incubate soon when I see the ncie blue sky behind your pictures!

Your shots are superb. Well done. The Sigma lens I bought is slower than the Canon I had, so I'm having trouble catching shots of birds on the fly. You did a great job with these.

I love how you have captured the Mallards in flight. Such beautiful colors.

Coy, I'm so thankful for your comment and suggestion! I've been learning things on my own by trial and error mostly, so I welcome and appreciate any tips or help I can get. When you say, "freeze them with flash," I'm not exactly sure what you mean....is there a special flash that I can buy that will do this? Please forgive me for my ignorance, I have so much to learn!

Spectacular as ever. Congratulations on your excellent work and the blog.
Regards

Coy, these are great shots, love that you caught them so perfectly in flight~

Wow, thanks for the link Coy....this is so interesting and I'm excited to have something new to research and try out! You're the best! ~ Debra

Gorgeous shots, Coy! Colors are so clear, image is quite sharp.