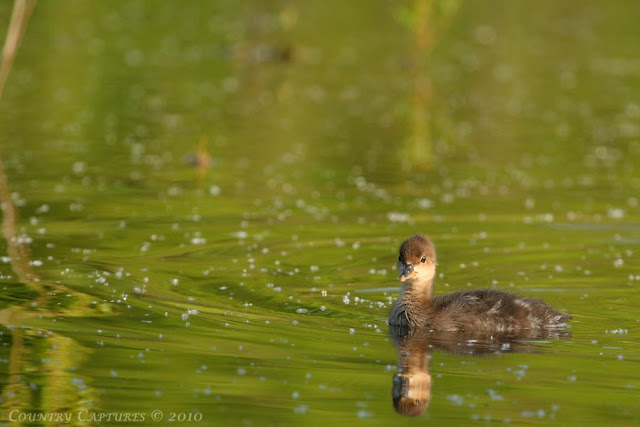 Last July after encountering a flock of immature Hooded Mergansers on our local wetlands I began wondering if the Hoodies were nesting there.  The question remained without answer until a week and a half ago when I encountered a Hooded Merganser female accompanied by her tiny brood.
This evening I returned to the wetlands in hopes of capturing some good duckling photos and was well rewarded for my efforts with both Hooded Mergansers and Wood Duck ducklings present.
This young Hooded Merganser was the first to swim past my hide.  Even though I was well camo'ed the duckling quickly was alerted to my presence by the sound of the camera shutter. 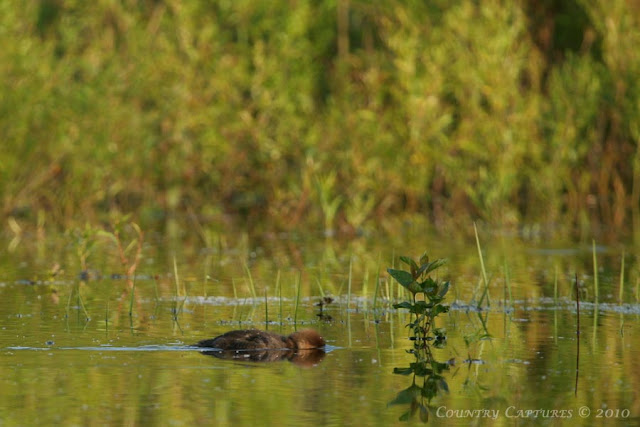 After fleeing either the same Merganser or one of its brood mates returned.  As you can see this bird has already perfected the merganser hunting method of swimming with eyes submerged allowing it a better view of the underwater realm.
A Green Heron was also hunting the wetland although it never gave me an opportunity to for a photograph.  At one point the heron took flight and apparently decided to land exactly where I was concealed.  As the bird flew through the narrow camera opening in the low growing bushes it realized its mistake and frantically began beating its wings as it made a hasty about face.  The heron was so close I could feel the gust of wind generated by its wings upon my face.  No photo was possible but instead a memory I will carry for some time from an exciting evening in the wetlands!
Posted by Coy Hill at 5/25/2010 09:08:00 PM

Coy, I have been enjoying your photos and commentary I just have not had much chance to comment lately. The lake has given you many quality photo oportunities this spring.

I hope to run into you in the next month or so photographing big game north or south.

Nice shots Coy! I'm behind on my comments as well. I've been down with a cold and sore throat, and many other things have been going on. But I always check each blog I'm following, even though I don't always comment.

Coy, Wow what a close encounter with the Heron, that must have been such a thrill for you. Glad that you were able to find the female Hooded Merganser and her little ones. Thanks for the entry share and have a wonderful weekend~

Hoodies don't breed here so seeing these were great!