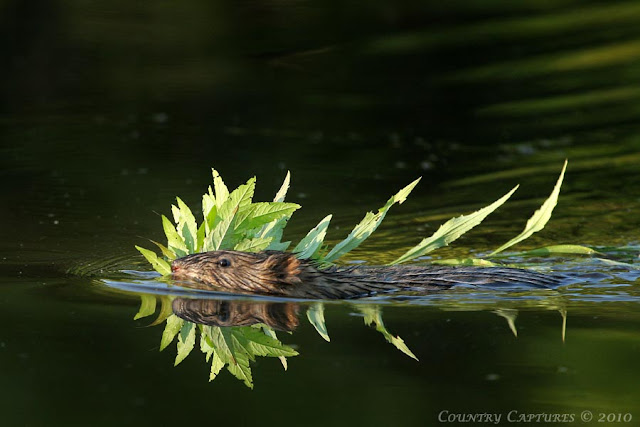 As the summer progresses the wetlands are in a state of constant change.  With no appreciable rain fall in well over two weeks the water level is receding rapidly leaving much of the previously flooded areas dry and baking in the hot sun.  The change of water level along with the vegetation growth forces me to change vantage points frequently.
This morning I chose a position overlooking a small pool that would be subjected to strong sunlight coming from my left once the sun rose.  Shortly after sunrise I spotted vegetation shaking about in a shallow portion of the pool.  A moment later I was able discern a muskrat swimming rapidly towards me with a bundle of leaves in its mouth.
Photographing the muskrat continuously as it approached; the best shot of the session occurred as the rat turned to is right allowing the sun to light its head along with the leaves it was carrying.  Before I could trip the shutter again the muskrat dove out of sight; but not before leaving me with the my very best muskrat capture ever.
If this image had been the only good image I came away with this morning it certainly would have been a worthwhile outing.  Instead it was only the beginning of what was to be a very memorable morning spent in the wilds of the wetlands.
Posted by Coy Hill at 7/04/2010 10:51:00 AM

That is a stunning shot.I wonder what else you encountered,sounds like there was more.:)
BLessings,Ruth

That is just a terrific shot, Coy! So, what else did you get photos of? Hope you share them with us.

And what a capture! Mate, this is simply a wonderful, splendid picture... The colors and the reflection make it so beautiful!!! Well done Coy...

This is terrific, Coy. They must be pretty smooth swimmers because the water hardly looks disturbed.

You wrote "trip the shutter"--do you use a tripod and remote for most of your nature photography?

More shots from the morning will be coming later:)

Adrienne,
Yes, I use both a tripod and corded release whenever possible for wildlife photography. When shooting the long lenses it is necessary to do everything possible the eliminate camera shake. This shot was made using ISO500 with the lens wide open at F5.6. The shutter speed was only 1/320th of a second which is too slow for reliably shooting a 400mm even with image stabilization. I would love to have a faster lens but my budget simply does not allow it yet.

How beautiful Coy, what a beautiful image with the greenery near the Muskrat and the lovely water reflection, your timing could not have been more perfect with your subject, or the lighting. Sweet~

Great capture Coy, he turned just perfect for the lighting and reflection in the still waters. But now you have me wondering what the remainder of the morning yeilded you. Don't make us wait to long.

Looking forward to seeing more. Thinking I need to invest in a remote trigger. I am not fond of my tripod, it's bulky and gets in my way when I'm hiking. But I'd like to get clearer photos, too. That would be worth the inconvenience.

Well, I must tell you that this is about the best I ever saw of a muskrat. The leaves are just perfect too.

This is an excellent lighting moment! The leaves just make this awesome!

The composition of this shot is excellent. Having the leaves turns what could have been a normal wildlife shot into a stunning one. The lighting is great too. You are a very accomplished photographer and I just love looking at your photographs.

Coy - this shot is gorgeous. Definitely a day well spent.