First Snow at the Feeder 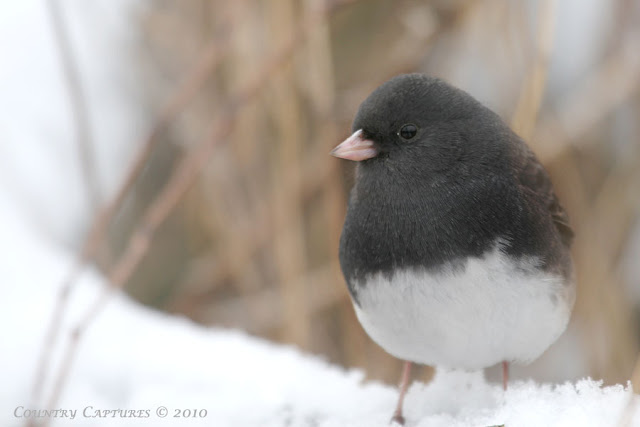 The seasons first accumulating snow passed through our area late this morning leaving slippery roads in its wake.  It wasn't much of a snow, maybe one-half inch at best but it sure did make travel treacherous for a little while.  While vehicle travel was impeded on the roadways, bird traffic really picked up at our feeders.

I took the opportunity to once again set up the pop-up blind near the feeders in my continuing quest for close-up bird shots.  A Dark-eyed Junco posed momentarily on a log no more than 10 feet from the front of the lens. 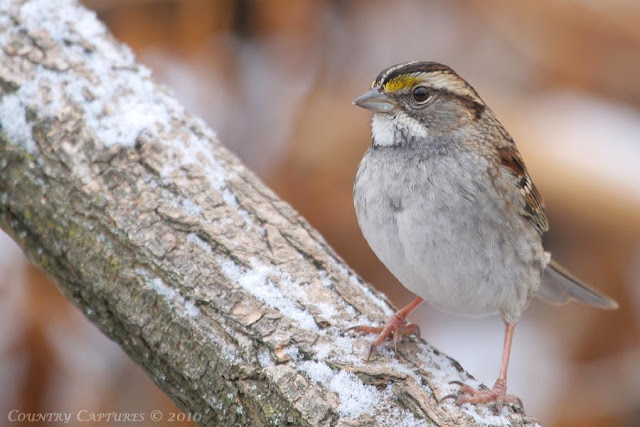 A White-throated Sparrow dutifully waits its turn at the hollow log feeder as chickadees, tufted titmice, white-breasted nuthatches and cardinals swarm about.

The blind is allowing me to get closer to the birds than was possible from an exposed position.  The birds certainly know that I am there as they watch me swing the camera and frequently make eye contact.  I believe that their greater level of trust is because with the blind enclosing me they perceive me as being restrained and less threatening.  I am enjoying shooting at the closer distances giving me an added level of sharpness and image detail not to mention the added protection from the winter winds.
Posted by Coy Hill at 12/10/2010 08:07:00 PM

These are super photos.

Very nice images from a close-up perspective. I especially like the White-throated Sparrow shot.

2 nice image, my preference gose to the junco ;)

That Junco shot is supurb! Your blind seems to be working out well for you. I occassionally go out on the deck and sit and watch the feeders, but mostly it's too cold to be out for long, so winter shots are mostly through the window.

Very interesting read, I think their would be a lot of mixed opinions on this. Love the theme that you are using, what is it?

Beautiful captures! The junco is a favorite of mine.

Coy, I think you have sold me on the need to get some form of camouflage to get closer to the garden visitors. Very nice shots.