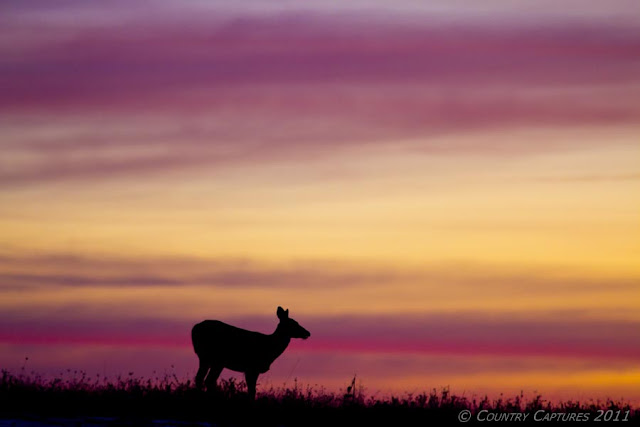 As the morning began to brighten I greeted another photographer in an SNP parking lot.  When he asked what I was there for I answered with one word; Whitetails.  He grimaced and said that he only had time to shoot the sunrise.  Trying to make the best of the beautiful sunrise developing I located a doe to silhouette against the awesome sky. 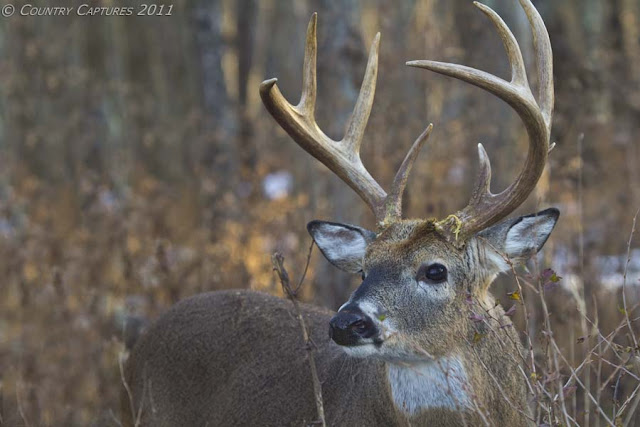 This buck had passed through the area where the sunrise photo was taken just a few minutes before I could get set up.  Fortunately I was able to bump into him again later and capture some good images.  I have been photographing him since the fall of 2007 and he has continued to grow larger antlers each year.  I have often heard that a buck will grow his best antlers between 4-7 years 0f age and then go down hill after that.  This buck is at least nine years old, perhaps more, yet his antlers continues to become more impressive as the years pass. 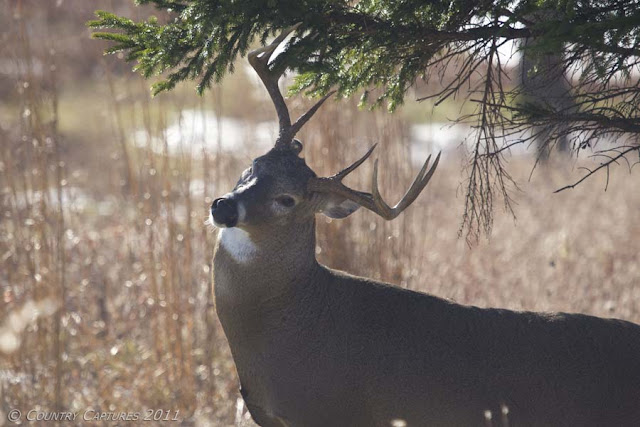 As part of the scrape ritual a wide eight-point rubs his antlers on an over-hanging branch.  When making a scrape a buck will horn and over-hanging branch, rub his facial glands on the branch as well as chew on or lick a twig on the same branch.  Once satisfied that he has sufficiently marked the branch he will paw the ground, clearing a small patch of earth, and complete the scrape by urinating on the bare earth. 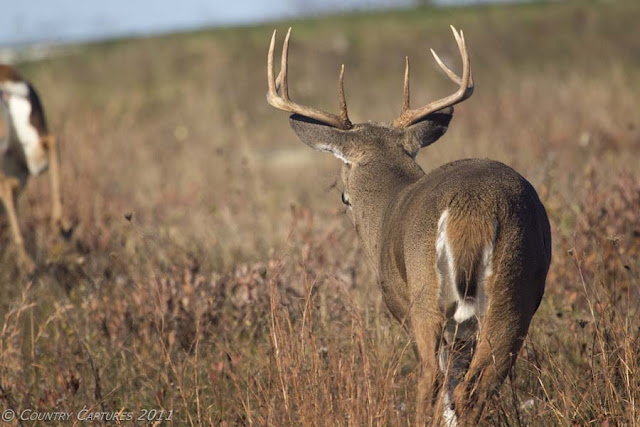 Although I must still work for a living I am so very fortunate that this year my vacation time is allowing me to spend most of my time pursuing whitetails during the rut.  I have spent so much time lately with bucks and bulls that when I crawl into bed each night and sleep begins to overcome me I see antlers bobbing through the dreamy mist.

and thanks for sharing it with us. :) beautiful photos.

Coy: Love the sunrise, that is an impressive buck.

I love your parting comment-"This year I am living my dream". I am thankful that you are willing to share the results with living your dream with the rest of us.

I enjoyed those two bucks the past three days and your shots are great!

I am so glad for you! Thank you for sharing your wonderful dreams with us. The doe against the sky is probably something i too will dream about.
Your nature photos are just stunning and over the years of photographing the deer, you have observed a great deal of their rituals and habits which you also so generously share with us.

So glad you're getting some beautiful photos for us to enjoy. Those bucks are amazing!

Certainly on the wild side Coy, all your shots are wonderful.

Wanna see my attempt to capture a stag?lol.

Great shots as always Coy. Glad you are living your dream.

Thanks for sharing.
Passinthru Outdoors Blog - Sharing the Passion

Well I'm happy for you as you seem very please, and honestly with such pictures I would be too... The first one is just plain perfect and beautiful as well as the buck portrait. A real pleasure to watch Coy....

That first shot is beautiful, Coy! And I love the buck photos!

Was blog hopping and found your blog. You have very beautiful photos here. thanks for sharing!

By following along...I am able to live the dream thru you. Thanks