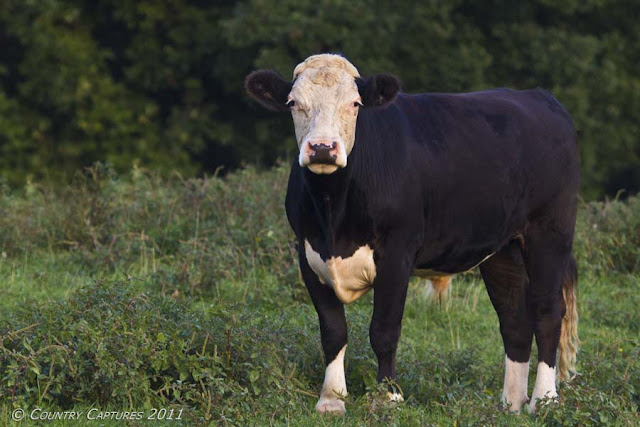 Born on our family farm, castrated during his first day of life, he spent his entire life grazing the pastures with the brood cow herd. Normally our calves are kept until they are 500-600lbs and then sold as feeder calves to be finished out for beef, but this fine looking fellow was chosen two years ago to stay. He had been chosen while still a young calf to provide beef for our family.

He never had to endure the trauma of being trucked to the livestock auction, chased through the sale ring, herded onto a truck, and then dumped into a crowded feedlot where he would barely have room to move. He never had medicated feed, hormone implants, or a steady diet of corn to make him grow faster than he would naturally. And he was never rounded up and trucked to a slaughter plant where he would be forced in line awaiting his turn to be killed. Instead this morning he was pasturing in the same fields he had known all of his life when suddenly his life ended.

Millions of people every day dine on a steak or wolf down a burger without giving a moment's thought that an animal had lost it's life in order for them to have that meal. But when you are around them from the time they are born right up until you carefully aim the shot that strikes their forehead you do think about such things.

It was with sadness that I aimed the rifle. Knowing that this animal had lived a much better, more tranquil life than most cattle slaughtered in the US helped to lessen the sadness.
Posted by Coy Hill at 12/14/2011 06:06:00 PM

very well said. having been raised on a farm for my early years, i was privy to 'the hanging tree' for butchering. but lots of folks don't give it a thought. just a package at the grocery store.

I know how you feel having done the something many times. You try not to get too attached but there's always a little sadness on butchering day.

You will know exactly what you eat when that beef is served. My father-in-law ran a small butcher shop years ago. I am quite familiar with the whole process,from kill to table.

A wonderful portrait and well written story of his life.

Great looking bull! He had a much nicer life than most.

Sad, but necessary I suppose. At least he lived a better life!

wonderful tribute and too bad all of them didn't have such a good life.