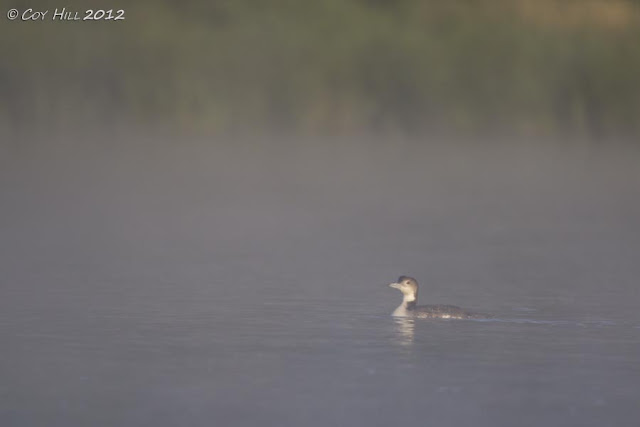 Arriving at the lake before sunrise this morning, mine was the third boat out.  With the air temp ten degrees cooler than the water, fog hugged the water limiting visibility.  Seeing the one boat heading north and the other still near the ramp I headed directly towards the western shore and began searching for waterfowl.  With the spring migration nearly over I realized that the likelihood of success was not high.

As the sun began cresting the eastern mountain I heard the unmistakable call of a loon echoing down the lake loud from the north end.  Immediately I headed that way, passing the boat headed north earlier.  Locating the loon I began maneuvering for photographs. 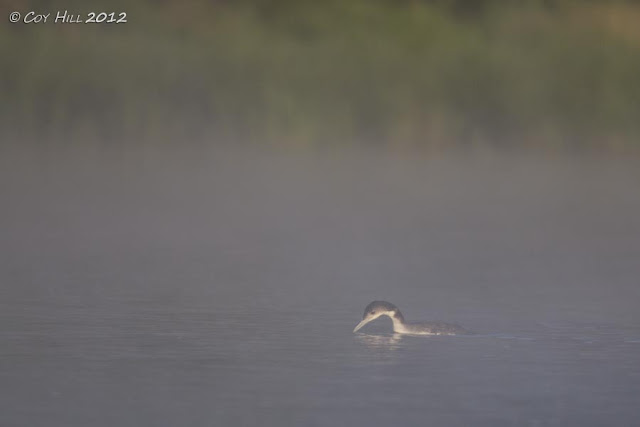 But this loon had a very low tolerance for boats and dove before I could get to withing good camera range.  Soon it resurfaced and again I tried a slow approach but again it submerged with this pattern repeating until the other boat with two fishermen were close at hand.  With the loon underwater I was motoring slowly in tight circles waiting for the loon to pop up.  The pair of fishermen were intent on casting to the side of their boat when the loon surfaced only a few yards directly in their line of travel.  As they were looking to the side they failed to see the loon but the loon, alarmed by the close proximity of their boat, immediately dove with a huge splash.

Talk about a reaction from the fishermen!  Hurriedly they retrieved their lures and cast into the spreading wake where the loon had submerged.  No doubt they thought that a huge bass had jumped and were wasting no time getting their lures into the strike zone.  With a chuckle I continued to circle watching for the loon to reappear.  A few minutes passed and then it popped up 50 yards or so from their boat and once again dove with a huge splash.  Once again the fishermen heard the commotion but again failed to see the cause, so this time they motored over and resumed casting to the wake, and once again to no avail.

Feeling that the loon had had enough of the boats I only waited a few minutes and when it did not reappear I motored off to do some fishing of my own.   I don't know if the fishermen had a successful day but at least they do have the story of the huge bass that jumped twice but was so lure-shy that neither time could they entice it to hit.

Loons are very adept fishermen but this encounter is the first I ever witnessed a loon fooling the competition :)

That should make for a good story to share. I wish i could have read the minds of those fishermen. :)

Funny. And, what a story those fishermen will tell about the one that got away.... ;)

This doesn't look like any Gavia immer I've ever seen...tell me more! Is this a different color phase?! Very cool pictures...I love loons!

Love it! They had no clue it was a bird instead of a big fish.