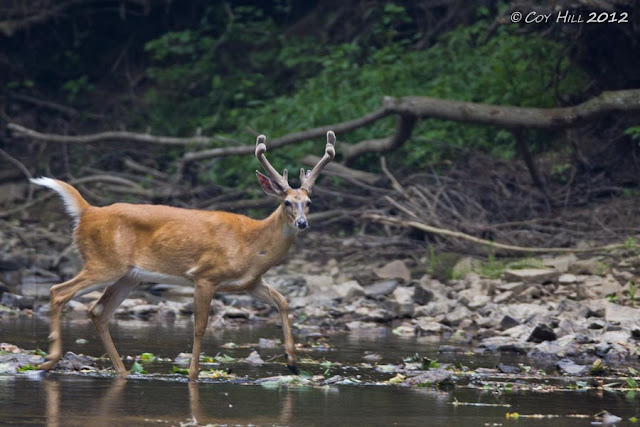 Lately my wildlife photography has had to take a backseat to other obligations and family medical issues.  Thankfully the medical issues appear to be behind us and this evening I found time to spend a few hours outdoors.  Looking for a change of pace I headed for a local creek in hopes of finding wildlife in the open along the watercourse.

Although the evening was very hot and humid, once set up I didn't have long to wait.  A squirrel on the north bank crossed over the creek using the only overhanging tree in sight and was soon followed by a redtailed hawk.  The squirrel successfully eluded the hawk as I could hear the squirrel barking a few minutes after the hawk dissapeared from view.  Half an hour later a single wood duck hen flew by followed by a mature bald eagle about fifteen minutes later, both flying at less than tree top height and with no chance for a photograph.

As a thundershower approached my luck changed when a nice whitetail buck stepped into the stream.  Light was failing fast and even with an ISO 500 I the shutterspeed was only 1/40th; not enough to completely freeze the movment and not enough time to change. 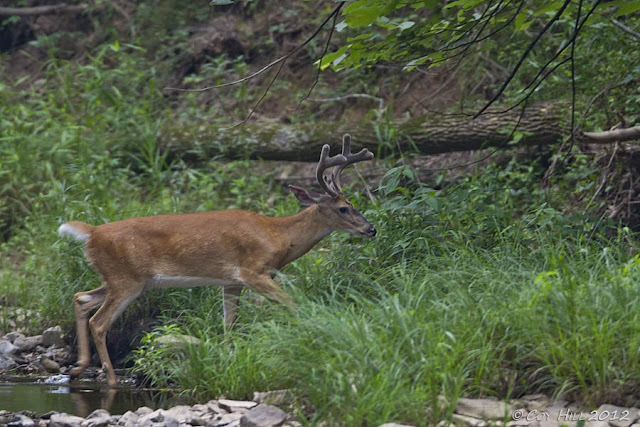 In a moment the buck had crossed the water dissapearing into the heavy undergrowth along the stream.  The encounter was shortlived but long enough to capture a couple of images.  I hope to meet this fellow later when his antlers have finished growing.
Posted by Coy Hill at 6/29/2012 08:43:00 PM

I do hope you get to meet this guy again and under better light conditions.

He's got some nice antler growth. I saw a trio of bucks two nights ago. It was after 9pm and the light was very dim. Hope the medical issue is resolved for good!

Great work again Coy! I am glad you are getting time to get out there-I always look forward to reading your blog and seeing the images.

Even with the low light you got a couple of good shots. Hopefully you'll encounter this fellow again.

Sorry to hear about the health probs Coy, and very pleased they are now in the past, Just love these shots and what a beauty.