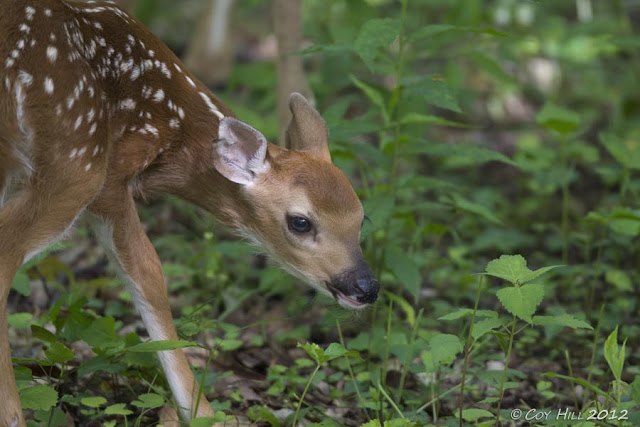 The frantic activity of the whitetail rut now bears fruit as a new crop of whitetail fawns arrive.  Meandering about on still somewhat wobbly legs this young fawn wasn't sure how to react.  At first it crouched as if about to lie down but then taking its cue from its mother who was not reacting to my approach it relaxed. 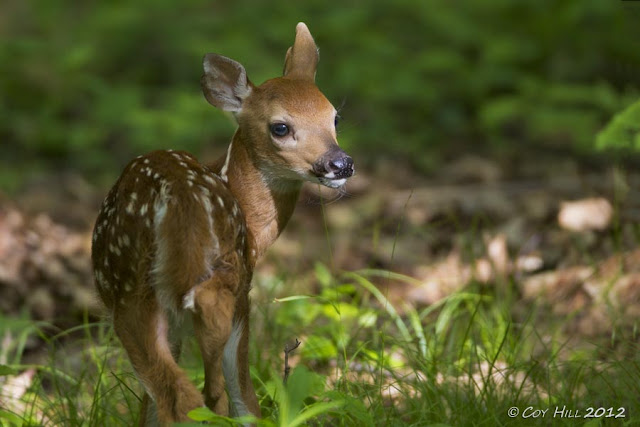 Willard and I visited Shenandoah National Park this morning in hopes of photographing the recently birthed fawns.  The fawns have been arriving here for the past two weeks.  Originally we had planned our visit for Friday however with heavy rain in the forecast we postponed until today.  Although the storm had passed it left much cooler temperatures and windy weather in its wake; not ideal conditions to find nursing fawns in open areas. 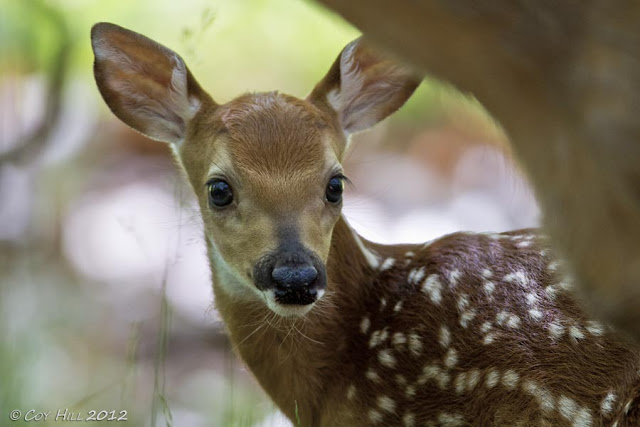 After spending a few hours searching for fawns in the meadow we were heading for the exit when we spotted a doe and fawn near the roadside.  Following up on foot, this chance encounter made the difference between success and failure.

really beautiful, coy. i like the tenderness in your shots.

Oh wow!!! Each of these is amazing. The innocence is so evident.

Hi Coy,
I find this most beautiful time of year ... even here in Germany it is precisely the time the fawns and other young animals to your photos ... I can only congratulate you .. since you've been lucky that has not attacked the mother ..
regards Frank

These photos are just over the top on the awwww scale.

There's nothing like baby fawns! Your photos are fabulous as always.

Visiting a little late from Camera Critters, here's my entry, hope you can still take a peek, your comment will be greatly appreciated.

Exquisite shots! Chance is everything in wildlife photography, and you always know how to capitalize on it.

Beautiful photos! Fawns are too cute.