Bird on a Wire: Broad-winged Hawk 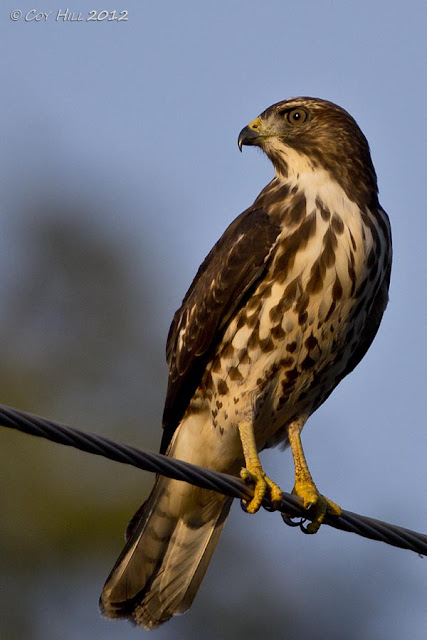 I was slowly motoring down a mountain top gravel road when movement at the top of the windshield grabbed my attention.  A hawk had taken flight from an overhanging branch, flying above and slightly in front of my slow moving car.  After a few moments the hawk made a sharp left turn and landed on a nearby power line.  Not expecting the hawk to sit for long I stopped the car and scooped up the Canon 30D with a 100-400 lens and triggered a few shots for the record.

Surprisingly the hawk remained perched and did not seem overly concerned with my intrusion.  Handing off the 30D to my wife I retrieved the 60D & 600mm F4 from the backseat, adjusted the window to provide lens support and began shooting in earnest.  It was only after doing some research that I learned that I had photographed an immature broad-winged hawk.  These birds, while common to our area, spend most of their time in the woods and seldom perch in a open spot where they can be photographed.

Broad-winged hawks nest in our area as well as much farther north.  Their fall migration has begun with considerable numbers being counted daily as they pass by Hawk Mountain Sanctuary on their long trek to winter in South America.
Posted by Coy Hill at 9/04/2012 08:12:00 PM

What a special moment you were given. Beautiful image to remember that time.

Exquisite photo! It's all about being in the right spot at the right time. Well done!

Beautiful capture! The lighting is perfect.

Wow, what a portrait!