Pa Elk: Limpy, the Star of the Show

The star of the show during my recent trip to Pennsylvania's elk country was a bull known to the elk photographic community as Limpy.  I first photographed this fellow in 2009 but it wasn't until he sustained an injury during the 2010 rut that he acquired his name.  The injury left him with a bad limp.  He is doing much two years later but he still retains a limp most easily observed when he walks.  This year he was my most often sighted bull as well as carrying the most massive antlers.
I captured this series of photographs of him as the sun rose during the first morning out. 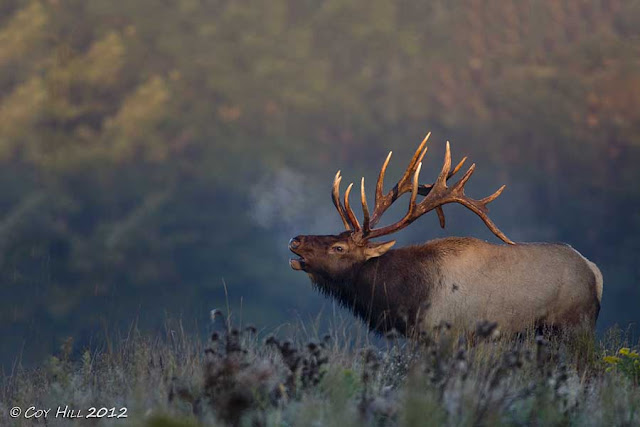 A number of photographers were photographing the elk activity as Limpy protected his harem.  The scene was beautiful in the soft morning light and shutters were clicking rapidly.  As the sun began touching the far mountain side I remembered how pleased I had been with the results from a morning shoot in SNP when the sun kissed the antlers of a good buck.  With this thought in mind I hoped against hope that the same would happen with Limpy before he moved off the ridge top. 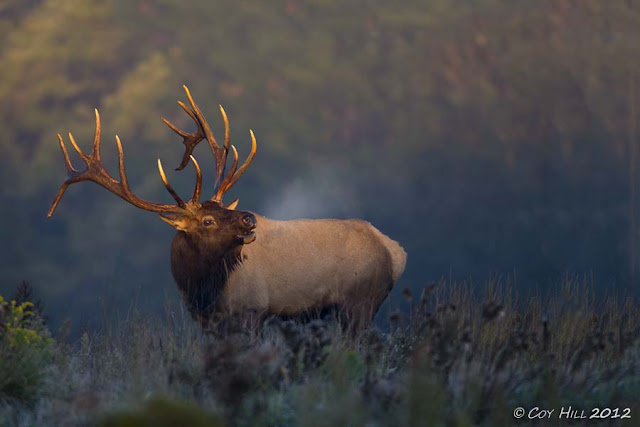 Not only did he stay on the ridge but he posed and bugled as if he were a trained model. 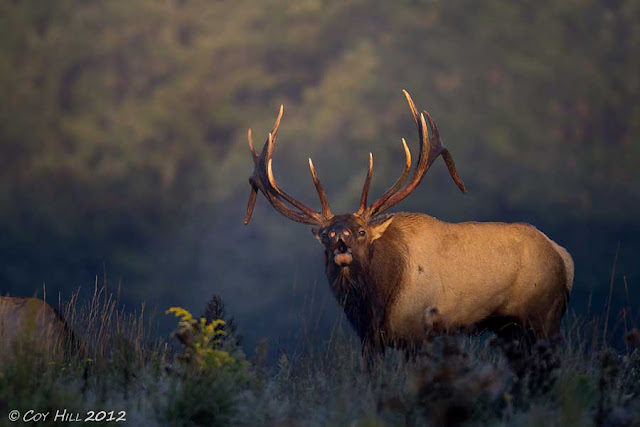 The cow near him was not quite as accommodating, however if she had paused from feeding to lift her head, she may have been a distraction in this photograph. 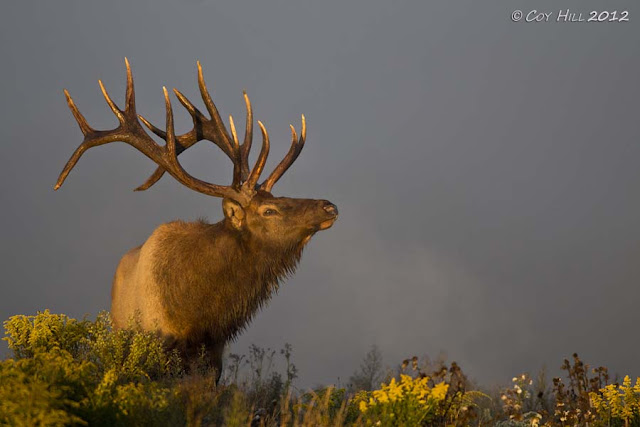 A little later, after the sun was fully up, Limpy posed like a statue testing the air.
You are free to disagree but for my taste the second and third images in this post are the best elk portraits I have ever captured.  His chances of making it through the upcoming elk season are slim and I will always be thankful that he gave me such and incredible morning of digital memories.

With all these great snaps I wouldn't worry a whit over which were "best". Excellent work.

he's really spectacular - as are your photos.

WOW!!! All are super great shots. The light is so perfect and the background couldn't be better.Amazing work,Coy.

Superb photos, Coy! Would that we could get as close as you do. We, the spectators at Slippery Ann Elk rut are not allowed to leave the road.

He is a majestic animal. Your photography is stellar.

Coy, it was great being with you out on the mountain. I only wish I had been with you on this particular morning. Your photographs are awesome and the light is just fabulous! Great job! I enjoyed being with you and hearing your many wonderful stories last week. I, too, wish the rut occurred more than just once a year. Maybe sometime I can tag along or meet you for an SNP whitetail trip, or maybe a Conowingo eagle trip, Middle Creek trip, or something to keep the stories, conversations, and good times going!

Limpy is still pretty majestic looking to me. thanks for sharing:)

Priceless, magical treasures Coy.
The sun kissed antlers are amazing. It makes me sad to read that he may not make it through this season.
Such a regal animal.

It's been quite a while since I visited and I see what beauty I have been missing.

Love how his head is just catching the sunlight in that first image!