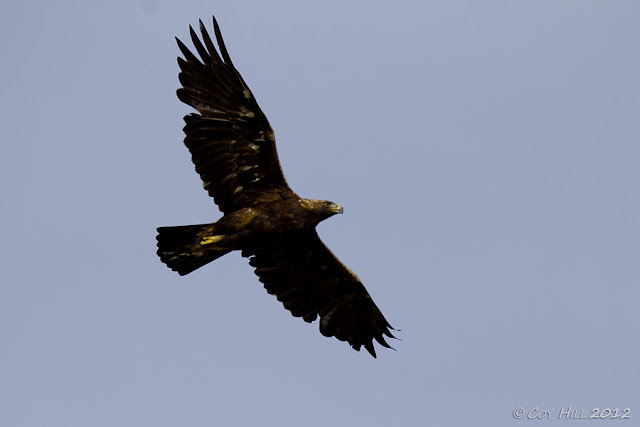 
Minutes after setting up to await the afternoon and evening whitetail rutting activity, the calling of crows drew my attention to my left.  Looking that way I spotted a large bird soaring above; a Golden Eagle!


Golden Eagle sightings in my neck of the woods are quite rare and up until just a few years ago I had never seen one.  Since that first sighting Willard and I have become accustomed to the occasional sighting of a golden from mid-autumn through early winter as the big raptors pass through on their southward migration. 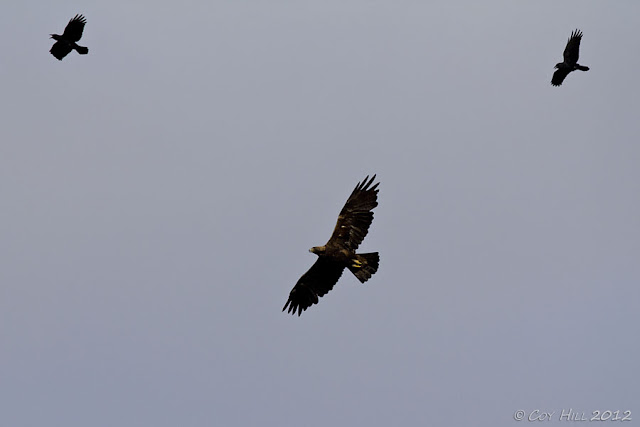 Crows harassing a Golden Eagle
While any golden sighting is a surprise this one did not come as a complete surprise.  After the sun had set Wednesday evening, as the light was failing and Willard and I were packing up the photo gear, I heard a rush of wings overhead.  Looking up I spotted a very large bird swooping low, quickly disappearing behind the nearby tree line.   In the poor light I was unable to make a positive identification.  There was no doubt that it was an eagle and I was pretty sure that it was a golden and not an immature bald eagle.  Thursday afternoon’s sighting confirmed my suspicions.
﻿
﻿
Posted by Coy Hill at 11/16/2012 01:37:00 PM

a most beautiful bird.

Amazing pictures. The last one looks like some sort of formation flyby.

Awesome! Congratulations on the sighting and for capturing it by camera.

What a beautiful bird!