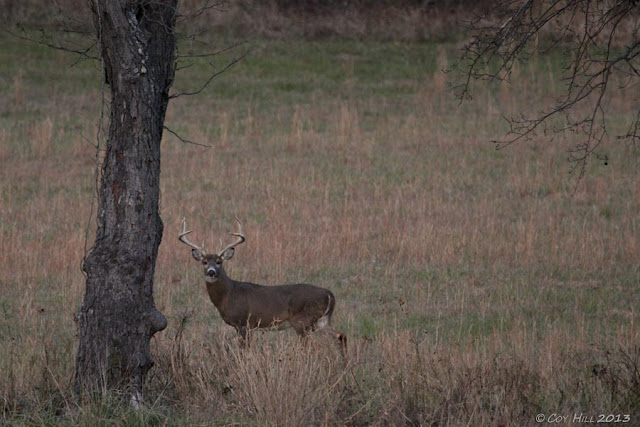 Mature Pennsylvania Buck, the largest I have photographed to date  November 20120
So after covering the herd, the hunters, herd reduction/stabilization, and finally antler restrictions, where are we at as a state in deer management?  Put together any group of hunters and you will get a number of differing opinions.  Over half agree that antler restrictions are a good thing while many if not most will decry an excess reduction of the overall deer herd.  Some will tell you that deer hunting just isn’t what it used to be while others will swear that we are on a path to annihilating deer from the commonwealth.  Some like the concurrent season structure while others think that we are killing too many does and should return to the old way with two weeks of buck season and three days of doe.

Hunter perception of the situation will in large part be based upon their own experience, what others have told them, and what they have gleaned from the outdoor media.  Those who hunt on tightly controlled private land where herd reduction was limited typically are more satisfied than those who hunt easily accessible public areas where hunter densities are very high.
Let's take a moment to look back at the kill statistics 1915-1985.  These are reported kill numbers.

Note that the deer harvest continued an upward trend throughout the seventy year period
.

1986-2011
In 1986 the PGC began publishing an estimated deer harvest because of the falling rate of hunters complying with regulations requiring harvest reporting.  Teams are dispatched to survey deer processors around the state to gather tagging and aging data.  This data is matched up against the harvest reports from successful hunters to determine the average reporting rates for each wildlife management unit.  This data is then used to determine the estimated harvest.
Note the rise in harvest in the late 1980's, leveling off at around 400,000 deer throughout the 1990's, spiking to over 500,000 as herd reduction began, and now as habitat improves and the herd hopefully stabilizes the total harvest number has risen slightly above 1986 levels.
Deer hunting and the deer herd has changed in recent years as it has since the beginning of time.  Pennsylvania was well known for its whitetail deer and deer hunters during the early years of our country when deer hunting was a business.  In 1861 Colonel Thomas L Kane raised the 1st Pennsylvania Rifles from the counties of Chester, Clearfield, Elk McKean, Perry, Tioga, and Warren to fight in our Civil War.  Each soldier wore a deer tail attached to his hat earning the unit the nickname “The Pennsylvania Bucktails”.  By the late 19th century unregulated market hunting and habitat destruction had nearly wiped whitetails from the scene.  From that low point, thanks to political pressure from hunting conservation groups, the PGC was founded and set out on a path to restore some of what had been lost.  During the 20th century many mistakes were made by wildlife managers as there really wasn’t much science to guide them in managing wildlife for sport hunting.  One of the mistakes made was allowing the herd to grow too large.

Antler Restrictions; should have been done years earlier if not from the very beginning.  The change in the age make-up of the buck herd was long overdue and it sure is nice seeing some decent bucks.

Herd reduction:  Not quite so good.  HR was a bitter pill to swallow however it was necessary if we were to have any chance to balance our deer herd with the habitat.  Forest regeneration was being impacted, agriculture was taking a heavy hit, and deer/auto collisions were at an unacceptable high.  HR wasn’t applied evenly, public land and state forest land where DCNR implemented the DMAP program was particularly hard hit.
Contrary to the perception that the deer herd has been destroyed let us reference data recently published using numbers from State Farm Insurance.  State Farm estimates that over 115,000 deer/auto collisions will occur in the commonwealth during 2013.  We are ranked as the fifth worst state for deer collisions with 1 in every 78 Pennsylvania driver expected to collide with a deer. While some may dispute the PGC's estimated harvest numbers it's difficult to dispute the independent numbers from State Farm.

Today the herd has rebounded some as the habitat has improved.  From my observations I believe that we have more bucks percentage wise and overall more adult bucks (2+ years of age) than at any time in my past if not in the entire history of the PGC’s management of the deer herd.  If the PGC doesn’t bow to political pressure and continues using the ever improving science of wildlife management to stay on the path of keeping the herd in line with its environment the future of deer and deer hunting in the commonwealth is bright.

Hi! Great reading and top pictures.
Found you through Kenny.
Will be back!!

Great articles, I love your photo's and blog

Linsdsjo, thanks and welcome. I'm glad you liked what you found here.

Greg, thank you as well. I didn't expect many comments when I embarked upon this series as lengthy post about conservation issues are most read by folks outside the photo blogging community. With that said while I don't visit your blog frequently I do enjoy reading your post on the Accessible Hunter and the incredible difficulty you surmount to continue hunting.