Roads from the Past 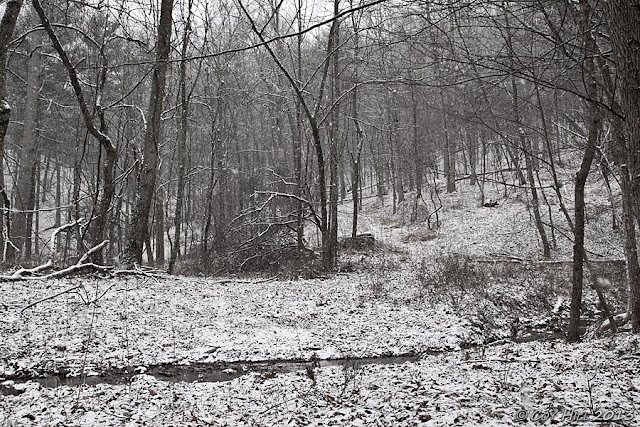 On a recent morning, with a light snow falling, I was out with the photo gear looking for wildlife.  As I walked along an old road my mind went back to the days of exploring this part of our farm with my grandfather and his stories about this having been a public road.

If you look closely you will see that the photograph is taken from the middle of the road.  After crossing the small stream it turns right and then left with a small cut-bank to its right as it travels along the side of the ridge.

Upon returning home I began searching for maps.  The earliest map I could find was from 1873 and indeed the road was marked as being public.  Continuing my search I again found it on a map dated 1900.  The next map dated 1941 no longer showed this road but instead denoted the newer road that now allows public travel to the farms and residences of the area. 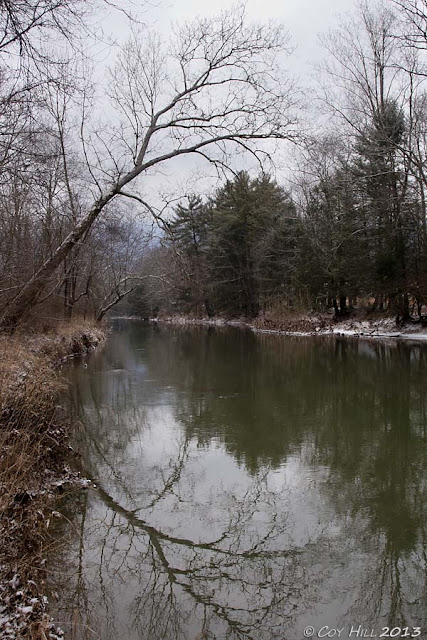 Walking back I paused along the creek and was struck by the similarities and differences between it and the now abandoned road.  No doubt before anyone had need of a road the creek had provided an avenue of transportation to the Native Americans living in this area.  The Native Americans that apparently lived here for thousands of years are gone and little other than the occasional arrowhead that turns up in a freshly plowed field is left to remind us of the time that they called this land home.

While neither the road or the creek provide a path for human transportation today, the road, made my man, is slowly being reclaimed by nature and will disappear with time; whereas the creek, a natural feature, is still flowing much the same as it was for thousands of years before humans entered upon the scene and will probably continue to do so for thousands of years into the future.

While we humans think that we are nearly all powerful and in control of our world, our civilization is but a fleeting moment in time.  A glance back at the past serves to remind us of just how unimportant we really are in the grand scheme of things.
Posted by Coy Hill at 2/12/2013 08:11:00 PM

I love the creek scene.It looks so peaceful.

Nice that you have ties to the land that go back and that you were able to spend time with your grandfather and hear his stories. Your shot of the creek is lovely! I like the reflection of the leaning tree in the water--a perfect frame for the water.