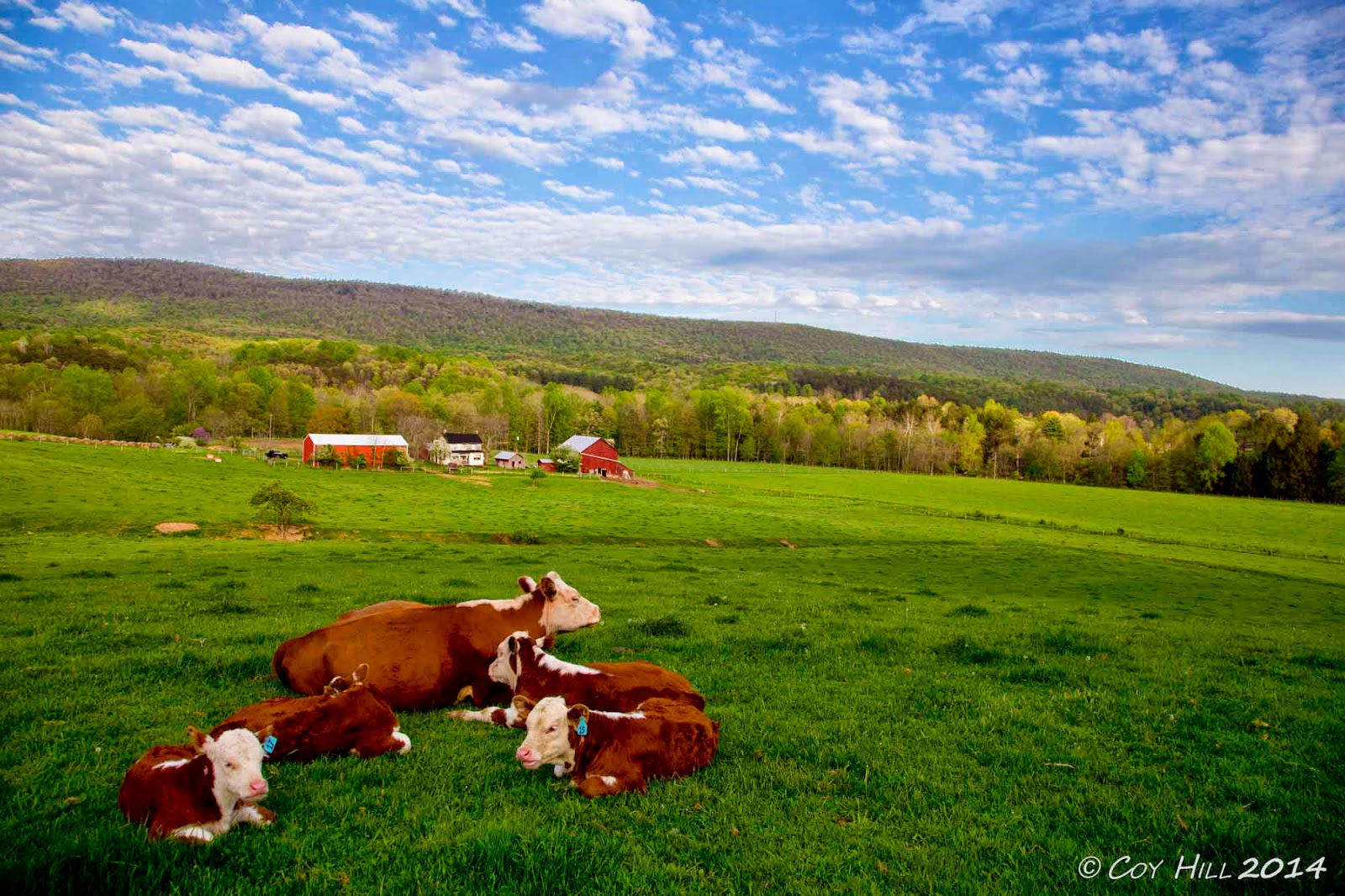 What could be more tranquil than a spring evening on a small rural Pennsylvania farm?
I took this photo while making my evening rounds.  Dad loved his cattle and even though both of his hips and one knee had to be replaced over the past decade he still took care of the day to day chores tending to his herd of 25-35 cattle.  With his passing in February a decision had to be made as to the future of his herd. After discussing it with my brother, Willard of Pa Wildlife Photographer, and my wife I decided that I would continue the tradition with only minor downsizing of the herd to take place later this year.  The downsizing will be necessary to provide more land for increased wildlife food plots.  As for now the herd has been increasing with the spring calves still arriving periodically. 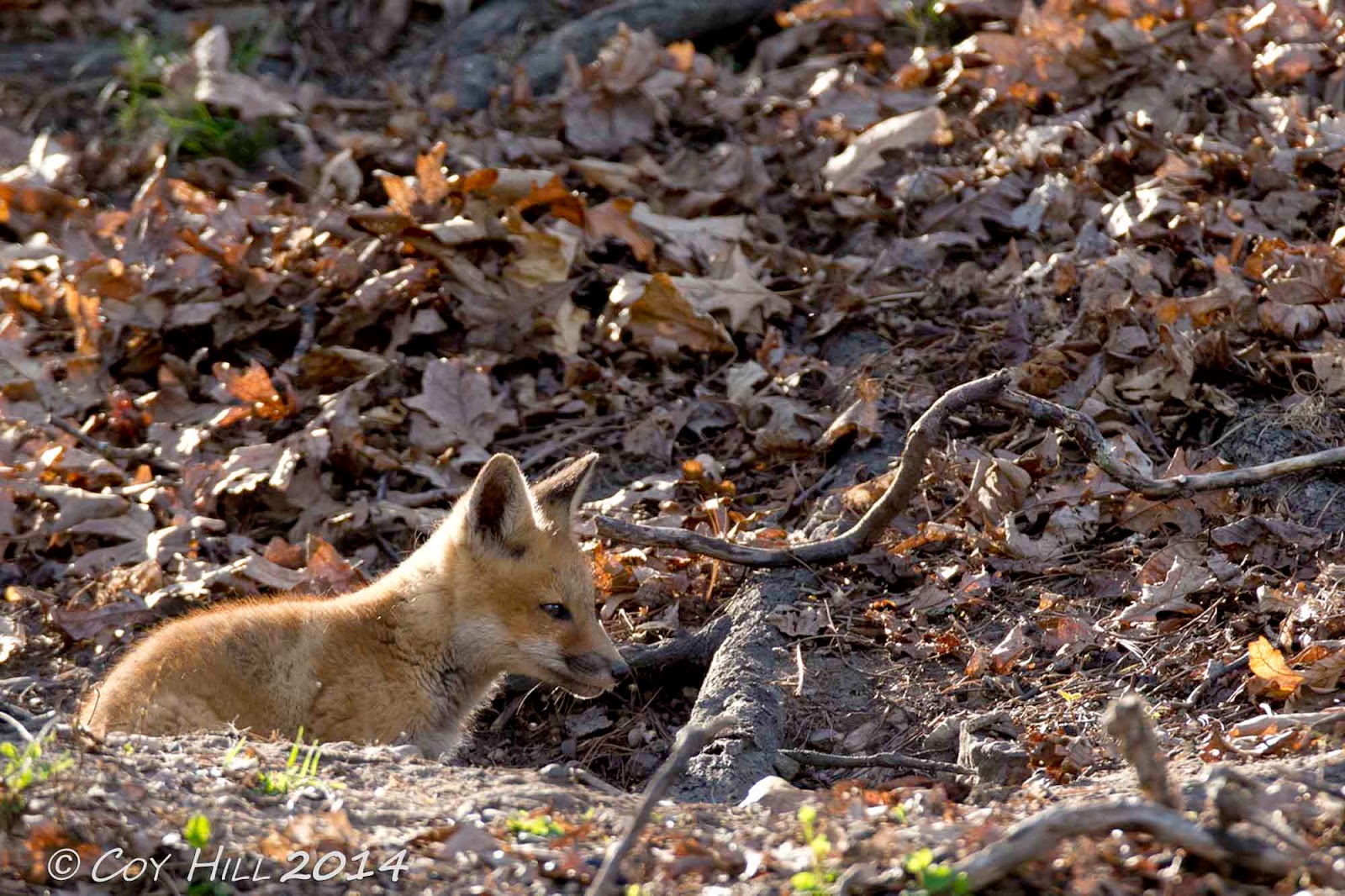 As tranquil as the meadows seem one needs only to step to the edge to find some little predators just now beginning to explore their new world.  There is no doubt that they and their parents eliminate any chance for tranquility in the life of their prey living nearby. 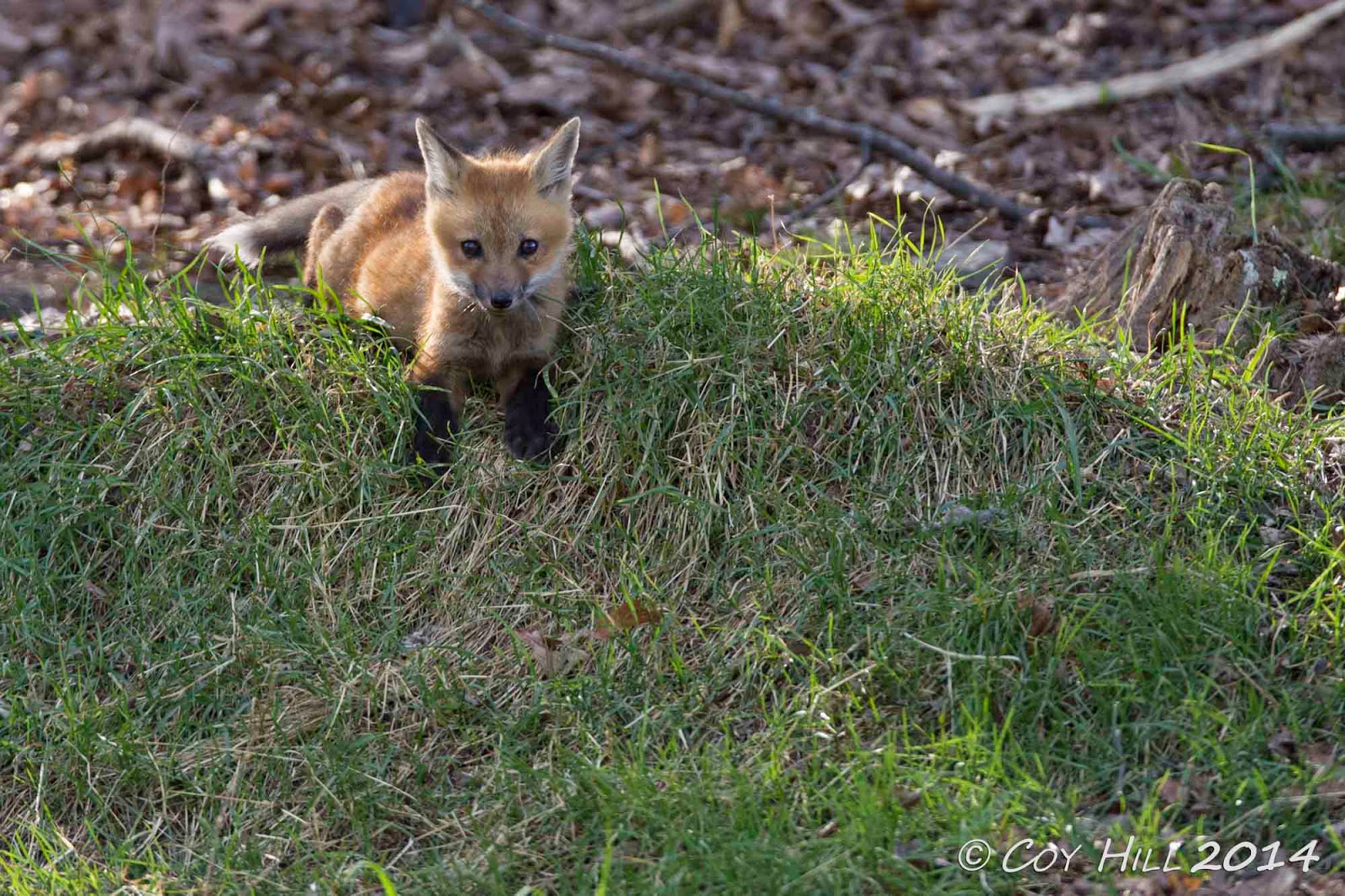 With each passing day the little foxes ventured farther and farther away from the den. 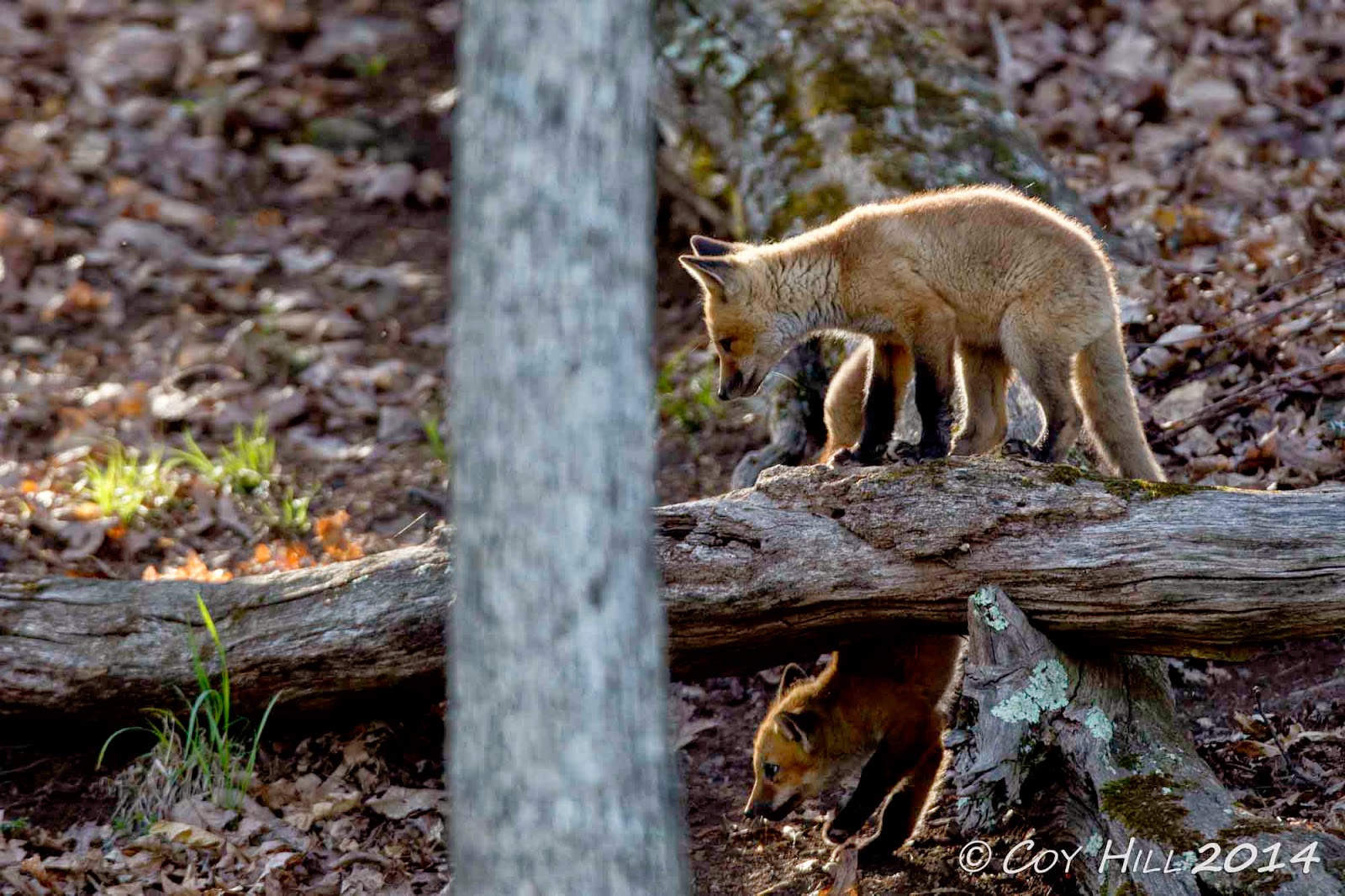 Checking out every nook and cranny 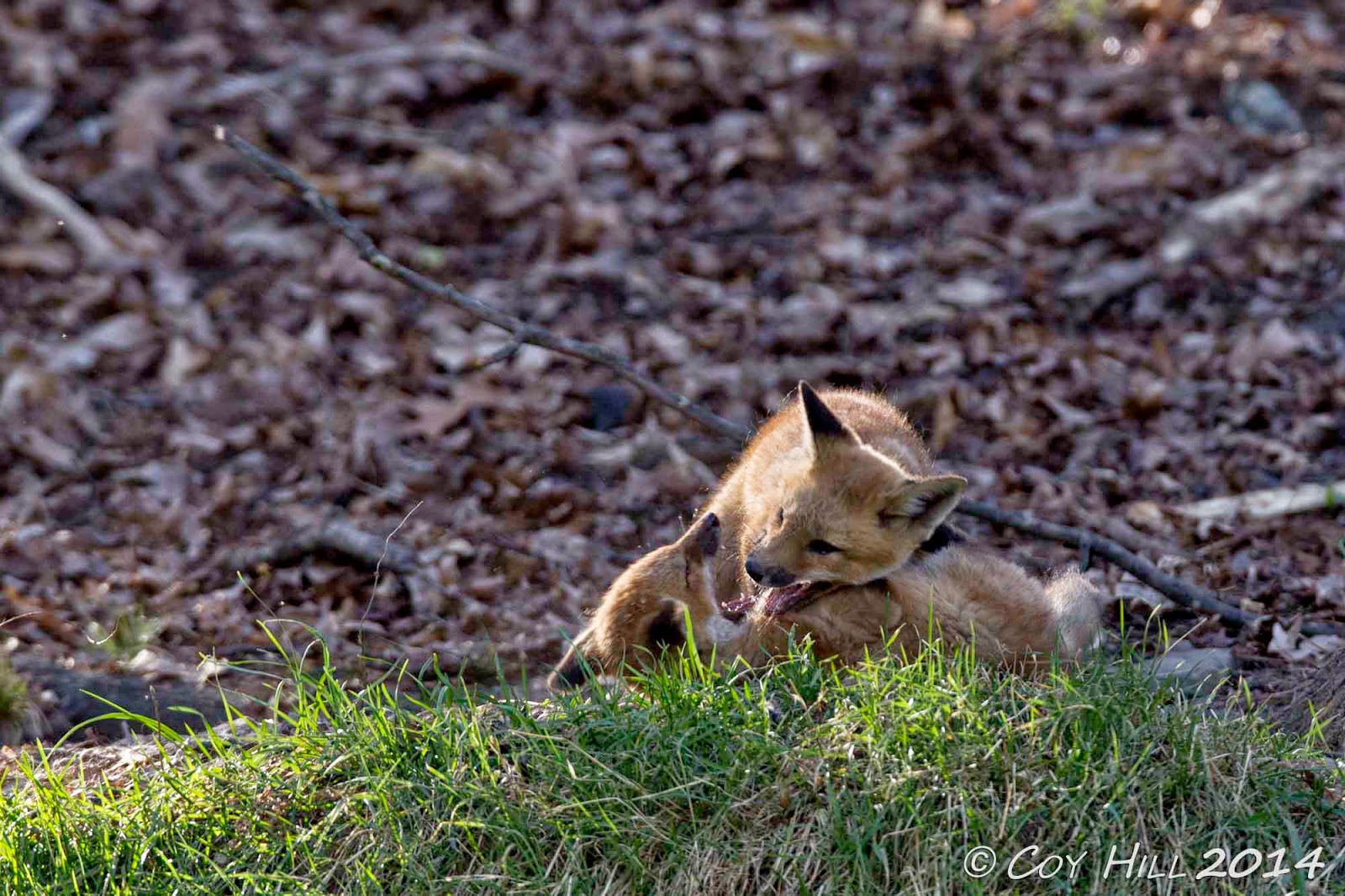 And engaging in playful roughhousing
﻿ 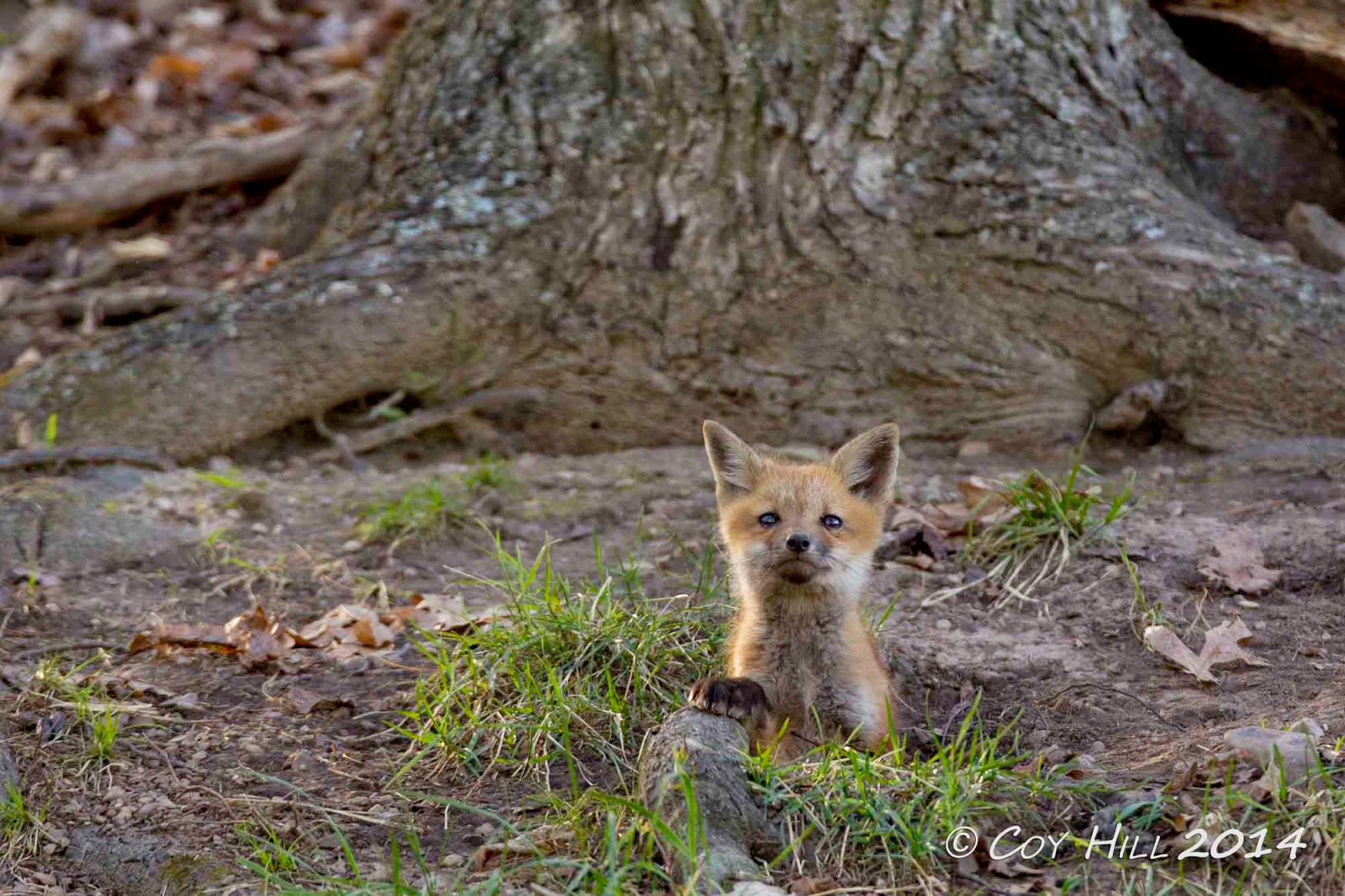 This fox pup retreated to the one of the den entrances when I approached a little too close for comfort.  From the safety of the den the little fellow watched me intently and unmoving for better than five minutes before dropping below ground for good.
Since this series was photographed the fox pups have disappeared.  As they were regularly leaving the den for extended periods of time I don't know I am just missing seeing them or if they have moved to a new location.  This was my first time locating and being able to photograph an active fox den making it one of the high points of my spring.﻿
Posted by Coy Hill at 5/13/2014 07:48:00 PM

beautiful fox pups. glad you are carrying on with your dad's farm and cattle.

Those little foxes are so cute.

Beautiful shot of the farm--your Dad would be happy to see that you're still keeping his cattle going. I love that last shot of the curious fox pup. You had a wonderful opportunity to observe the fox family as they grew. Perhaps the den will be active again next year.

The foxes are adorable. Love the first landscape.

They sure are cute little critters. I haven't run across any fox dens this year. Usually a local farmer or neighbor will alert me if they've seen any.

How fortunate you are to have been able to observe and photograph these beautiful animals.

Oh så WIllard is your brother??? Great decision to keep the cattle. Ofcours some work but the land needs cattle.
The pups are adorable. Not easy to get them on a Picture.
Majsan//