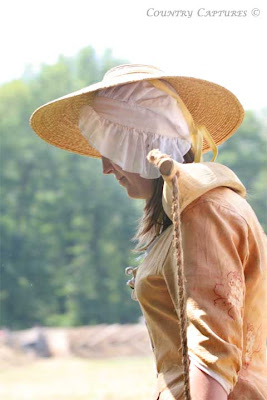 As word spread that French forces were on the way, Redcoats as well as villagers sought shelter in a redoubt near the village of Raystown, later to be named Bedford.

The setting of this conflict is 1758. General Braddock’s expedition against Fort Duquesne (now Pittsburg) failed two years earlier when he and his troops were destroyed in a surprise attack. General Forbes decided to engage the French from a different direction. His troop movement across the Allegheny Mountains required the building of a new road, now known as the Forbes Road. Forbes’ plan called for a slow march with secure lines of supply protected by a string of forts along the way. Fort Bedford was one post in this string of forts.

Today the Lincoln Highway (US Route 30) follows much of the path of the original Forbes Road.

We will break from the ensuing battle for Camera Critters and resume with the following post.
Posted by Coy Hill at 8/22/2008 07:07:00 PM

Salty: Love the water girl, did she give you a drink?

Our Captain Brady from the Kent leap of the river came from Fort Duquesne on a scouting expedition. I made a post on Brady's Leap a while ago.