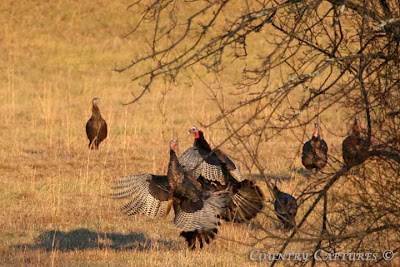 Partially screened by branches, the fighting gobblers demonstrate their fine style of combat.

I had previously observed brief scuffles between gobblers but never had I been treated to a show such as this. The fighting between these two gobblers continued for eight minutes. If it had not been for stopping the action with photographs I would not have been aware of what an important part the legs played as impact weapons.

do you think they were fighting over food or women? LOL! Great shot!

Shellmo - probably over woman. Food is not worth fighting for. LOL!!

Coy - another great picture. You should see Ostriches fight during the mating season!! They tear each other open with that long toe of theirs!!

Not only do I enjoy viewing your wonderful photos, Salty, I always enjoy learning a thing or two about wildlife and nature from your blog. Thanks!

What a wonderful photo op for you! Thank you for sharing it .. I have never seen a display like this. The spurs on their legs are quite fearsome looking!

Have a wonderful holiday ... I am taking a little break until the end of the month.

Salty: Those will be photos you will treasure for a long time.

Great turkey fight shots. Still one wild animal I have not got to photograph yet.

What an excellent capture! Love the variegated feathers!