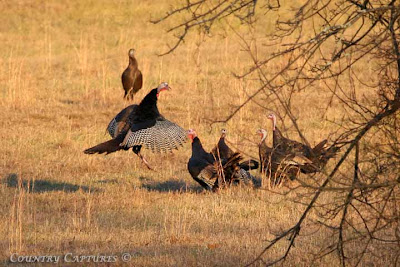 Occasionally while watching wildlife one is treated to a Special Event. This photograph was taken during one of those events.

The event began with one wild turkey gobbler arriving to feed in the field. As the sun lowered in the western sky turkey talk could be heard coming from inside the woods. In a few minutes some turkeys arrived at the woods edge. The lead gobbler in this flock spied the lone gobbler feeding and immediately began a fast aggressive approach followed by the remainder of his flock.

As he closed the distance both he and the feeding gobbler displayed aggressive body language and I knew that a gobbler fight was imminent. Soon the gobblers were engaged in combat, jumping into the air attempting to kick their opponent with their powerful legs.

Much of this fight took place behind a screen of branches from the tree to their right. The gobblers were a considerable distance away and this shot with my 100-400mm lens is cropped considerably.

LOL!! Great story Coy!! I love the fact that some of us are privelaged to be able to witness and appreciate these things in the wild.

That is another one of those times that photographs are not as important as just seeing the event. Of course we all would like to get the shot also.

The photographs on your site and Willards never fail to amaze me, they continue to show the true beauty of Pennsylvania and its wildlife, thanks Brad

thank goodness for a good zoom lens! i love watching wildlife interact like this and you were able to capture it.

This is awesome, sometimes we just have to crop more than we know is printable, but for this it is fine.

You have a spam comment, you can delete it.

Salty: What a neat look at the fight. Kickboxing at its finest.

Why don't you give the Ugg advertisement the boot.

Lucky you. Cool thing to see and photograph.

What a special thing to see!