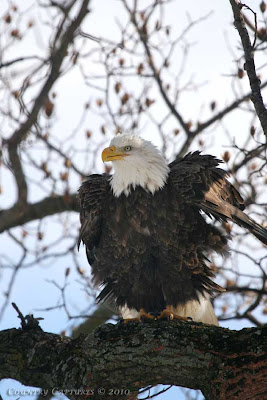 Planning on an early departure Willard and I began the trip to Conowingo Dam at 3:30 to get us there at first light. After having and planned an earlier trip which was thwarted by heavy snows it was good to get on the road to a new photographic adventure.

The internet has been buzzing about the Bald Eagles that hang out around the dam during winter feeding on the fish that are killed, injured, or stunned passing through the turbines of the hydro plant and finally we were on our way to check it out for ourselves.

The trip down was quite uneventful and what looked to be a promising beautiful sunrise lost its color moments after it began but our main interest lay in the eagles and it only took a few minutes to spot the first one sitting on a power line tower.

Hydro generation began while it was still too dark for flight shots and the eagles concluded their fishing rather quickly. After photographing a transition phase eagle eating its catch high in a tree another photographer advised us as to where an adult was perched. Walking up to that location we immediately set to work photographing the accommodating eagle trying to always be ready for when the eagle decided to depart, hoping to capture its image as it launched into flight. Little did we know that it would not be until four hours and forty-five minutes later that it would soar off and at that precise moment neither of us was ready!

During the time the eagle posed there were some interesting moments such as this shot when it ruffled its feathers.

For more photographs and information on this adventure visit Willard over at Pa Wildlife Photographer.


I expected this trip to be the photographic highlight of the weekend and indeed it was a good productive trip but little did I know that it would pale when compared to what was to transpire Saturday morning. Stop back in a day or two and I will fill you in with stunning photos of a totally unexpected wildlife event.


For more Critters of all kinds click on the
Camera Critters badge above.

Come on Coy don't make us wait, give us a hint to what happened. Shane and I made the trip to Conowingo three times this winter, we found out it started earlier this year (October) than in the past and peaked in January with the mature eagles leaving to tend to their nest. I guess I will have to wait until fall to do it again now. I am glad you got to see the mature close enough for good shots.

I like this shot of the eagle. You don't often see shots of them ruffling their feathers, and while it's too bad you missed the flight shot, this one is beautiful.

it would be a dream to see an eagle that close!
thanks for sharing this wonderful photo

Great shot of this very impressive bird! He is the king of the skies!

Great shot of the eagle.
Have a nice day

Since I have been down to the Conowingo Dam just recently, I know where your going. I saw about 5 or 7 Bald Eagles there, but to capture them on my camera, they were just to far away for the Lens that I have. I did get one Image, but it's still not as good as what you have.

While just walking around the parking and visitor area, I observed a number of photographers with those big huge Wildlife Lens that I would just love to have. I did take an Image of them, but it didn't turn out too well. Had too much "Sun Flair" on it.

Hope that I don't have to wait to long for your Images. You always have done such a great job with them.

That's a great Eagle shot, but I CAN'T WAIT to see what you're going to post regarding your unexpected wildlife event.

Fantastic shot of the eagle, Coy. I can hardly wait to read about your other adventure!

Great shot Coy, Now you have me sitting on the edge of my seat.