The morning began like so many others with Willard and me at one of our favorite winter wildlife observation spots. During the winter we frequently photograph wildlife together and then go our separate ways during the warmer months as we pursue different wildlife photographic interest. 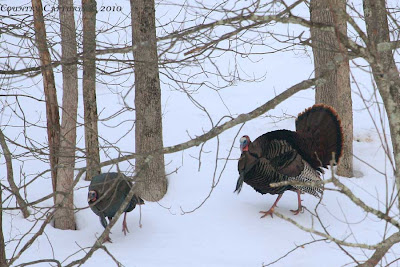 When a flock of Wild Turkey gobblers came into view we were a pleased to see that one gobbler was strutting, a sure sign of the first stirrings of their spring mating season. This was the first strutting either of us has witnessed this year. 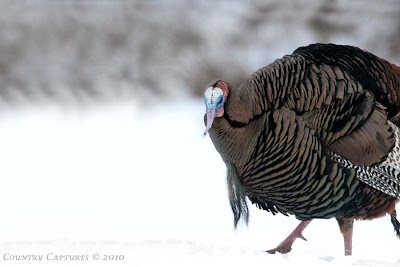 As we observed the flock this gobbler badgered his flock mates attempting to agitate one into sparring with him but they seemed to ignore his aggravations. As these turkeys began to wander off gobbling was heard from over the top of a nearby ridge and soon another small flock of gobblers could be seen on the wooded hillside. 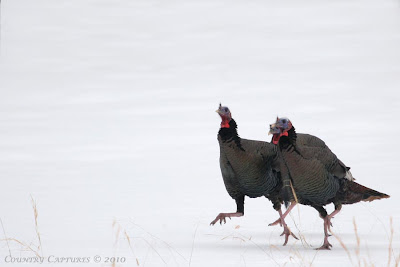 The new arrivals seemed hesitant to move any closer to the first flock and spent quite a bit of time feeding on the snow covered hillside until finally one gobbler got up the nerve to move in. The first flock had been keenly observing the intruders and as a single intruder moved in three of the first flock charged him running at top speed. 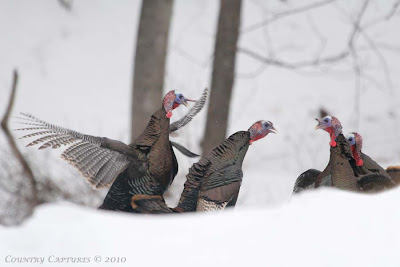 The gobblers met in a loud ruckus of putting, purring and flapping wings. I was somewhat distraught as the action was taking place nearly out of sight behind a nearby snow bank as can be seen in this photograph.

I have witnessed wild turkey gobblers strutting and charging numerous times in the past but what was to come would be a totally new adventure for me.

As the legendary radio commentator Paul Harvey would say for the “Rest of the Story” check back later.

This is proving to be better than a mystery novel.Real life is always more interesting.
Blessings,Ruth

Oh, you really know how to string us along! Don't wait too long to post the "Rest of the Story."

Hi Coy,
Well how coll that should have been to meet these guys! I love the third picture a lot, it looks like they are running to compete! It is all the time funny for me to see that wild turkey exist!! That's not the case in Europe ;-)

These photos are terrific! Gosh, I can't wait to see and hear "The Rest Of The Story!"

A true cliff-hanger. Fantastic photos and the action you captured in the last one is amazing.