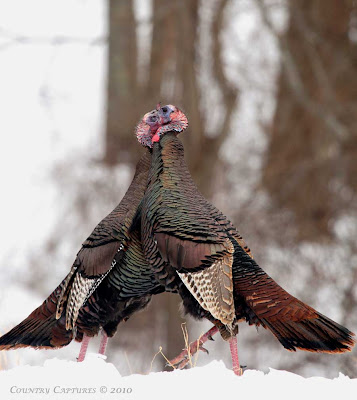 As suddenly as the commotion began the landscape fell silent when from the fray two turkeys emerged locked in battle. With heads locked and breasts against one another the gobblers pushed and shoved with all of their strength. 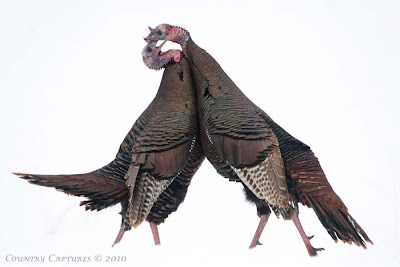 When the head hold gave way the gobblers would grapple again trying to grab the other in the most advantageous hold all the while shoving their bodies together. 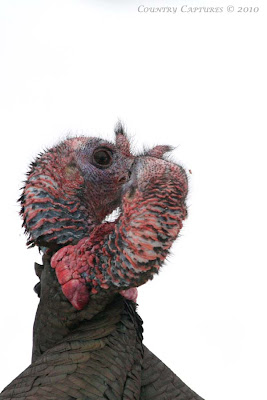 In this close-up shot the combatants are holding each other with their necks intertwined while jockeying for the head hold. As the gobblers vied for the advantageous hold their heads and necks reminded me of two vertical snakes twirling together My observation during this fight was that the gobbler with his upper beak over the top of the head of his opponent had the advantage.

In all of my years of observing wild turkey behavior this is the first time I have ever witnessed a fight between two adult gobblers where they grappled each other. Previously I had observed charges, kick-boxing, and some pecking but never anything remotely resembling this serious silent battle for supremacy.

In the next post we will take a better look at the violent action taking place here and a look at what the two accomplices were doing while these two gobblers fought their intense battle.

Wow! What an encounter! How fortunate that you were there and able to capture the action. Fantastic photos.

That is as exciting as it gets, it had to be difficult to photograph I know I get caught up in watching the activity and sometimes forget I have a camera.

Great shots, I am enjoying your good fortune.

Again, Coy, you have captured a great moment with Nature. You have been very lucky to witness this behavior between the Wild Turkeys. This is something that is rarely seen. I've never seen it. Don't even get to see Wild Turkey's hardly at all, let alone this.

I am assuming that you just happen to come upon this, or was it something you had to sit and wait for? I am thinking that while Photographing Wildlife you have to wait for just the right moment. Having allot of patience helps.

Hi Coy,
Amazing sequence. it looks very impressive from your pictures, so I cannot imagine how this was in reality! You probably enjoyed this unique moment!!! That was for sure gorgeous moments to witness! This is a spectacular message!

Just a fantastic encounter and wonderful photos! I have never seen anything like it. Timing is everything, I'm told

wow! so great you got to see this..and got excellent photos, too! nice!

That was SOOOO cool! Thanx for this story! It was amazing! I would love to witness this! Wow! Congrats on great photos! This could be my favorite post from you!