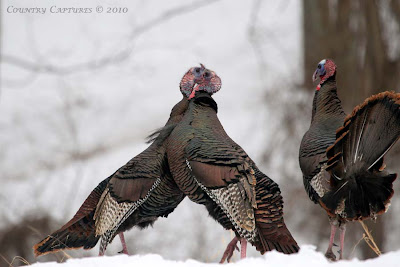 I promised yesterday to show what the other gobblers were doing during the fight. Well here they are, staying close to the fight, appearing to referee but in reality being nothing more than close up spectators. 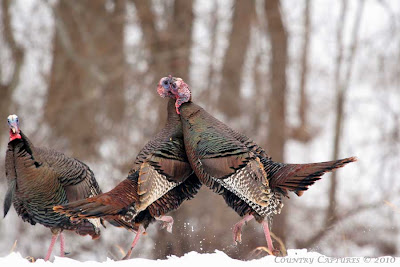 With snow flying from their feet the gobblers fought violently while another gobbler looks on, probably glad that he isn’t the one getting knocked about. 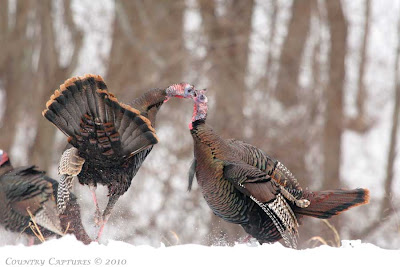 At moment when the observing gobbler wasn’t paying attention the combatant on the left nearly leaves the ground in a spray of snow kicked up as each tried to better the other. This is one of my favorite shots of the entire episode.

In shooting this fight I was using the camera in AV exposure mode, evaluative metering, and compensating +1 to +1.3 stops while pausing often to check the LCD for blinkies (over exposure) and not worrying too much if some of the snow was over exposed. I also stopped down some (F6.3-7.1) to give a deeper DOF as the subjects were moving so fast as to make exact focusing difficult.


I have enjoyed reading all of the nice comments concerning this series. Some of your comments require a reply so here goes.

First I must admit; yes I am stringing you along but the fight was such an interesting event and I captured so many images that I didn’t feel that I could do it justice with just one post.

Chris
Wild Turkeys are quite common in America and are now found in nearly all states and in some Canadian provinces. Although early settlers did put quite a dent in their population they have rebounded wonderfully. State wildlife agencies with help from private groups such as the National Wild Turkey Foundation have been instrumental in improving wild turkey habitat and in relocating birds to suitable habitat that previously held none. Much research has been done with wild turkeys and it continues as evidenced in an earlier post featuring the Pa Game Commission capturing and banding turkeys in preparation for a new four year hen survival study. You mentioned that perhaps I enjoyed this unique moment; certainly! This was by far the most exciting encounter I have ever experienced with wild turkeys.

Les (Corker2)
I have been around wild turkeys all of my adult life and have spent considerable time observing them as well as hunting them. This was the first time I have ever witnessed a fight of this magnitude. I did some searching on YouTube and found where a couple of videos are posted showing gobblers grappling each other. Wild turkeys are normally very reclusive; the best way to photograph them is to wait at a location where they frequently feed. It takes a lot of time but it can pay off handsomely, besides where turkeys frequent many other critters will as well.

Brad
I guess I have the opposite reaction when an exciting moment happens; I find that I am so busy trying to capture images that I miss a lot of the action then learn more about it later as I review the images.

Mona (Montanagirl)
As you and anyone else who photographs wildlife knows, timing is everything! I have spent hours and hours with turkeys and other wildlife that was doing absolutely nothing. Wildlife feeding or just standing/sitting around can be good for portraits but when the action breaks; that’s when the real fun begins!

Thanks everyone for all of your nice comments. Stop back later, more to come

These pictures have been most fascinating.Looks like they would not even have noticed you,they were so intent on their struggles.
Blessings,Ruth

I did not mind being strung along, you have seen my blog enough to know I would have done the same thing (like the elk in the swing). I enjoyed it very much, the story and the photographs, maybe someday I will get to experience something like this. But know how are you going to top this one?

Never seen anything like this before and enjoyed the series very much. Thanks Coy.

Several years ago, down south somewhere, on our way to Texas, we passed flocks of turkeys flying from one roosting place to the next. There must have been close to one hundred birds. They were trim birds but clearly turkeys.

I like your photos of these. These look to be about the same size.

This is a very interesting series. I look forward to seeing more.

It's been a great series! More - more...please