As temperatures begin to rise and the snow pack recedes, early signs of spring are beginning to appear. With our ponds, marshes and lakes still locked in ice I decided to check some local creeks for waterfowl this morning. After unsuccessfully check a few spots I spotted a pair of geese.

This encounter with the geese soon took an unexpected turn giving me a honker photo shoot like I had never encountered before. Sorry, but you’ll have to check back later for the “action” shots! 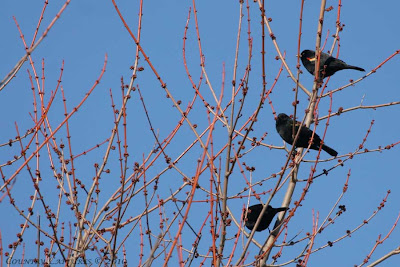 Early this morning I passed an ice covered pond noticing a lone red-winged blackbird perched among the bull rushes, my first for this year. This was the same spot where I observed my first red-winged blackbird last year on February 21st. By this afternoon flocks of redwings were moving through our area on their journey northward.

During my time afield today I flushed a pair of ducks that I was unable to identify or photograph from along this creek. While walking along the water’s edge I heard the unmistakable staccato rattle call of the belted kingfisher, a few moments later it flew past, another first for the season.

The calendar indicates that spring is still two weeks away but nature is already heeding the call of a new season of renewal.

The arrival of spring will be so welcome.Send those birds north,please.:)I know they will come and until then I will enjoy the ones you post.
Blessings,Ruth

I so love the firsts of Spring. its like the world is awakening from slumber.
Beautiful shots Salty.

Great shots as always. I love when spring starts to awaken as well. All the new buds, birds, and goings-on. Can't wait to see your Honker shots.

I'm looking forward to seeing the geese make their way north! We've got a ways to go before we'll see them though.

Hi Coy, I think Spring is here too.
Great photo.

Thanks for your continued visits and comments.
A week in wales now showing on my blog.