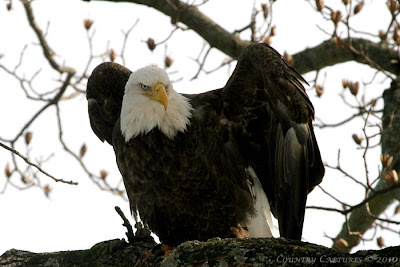 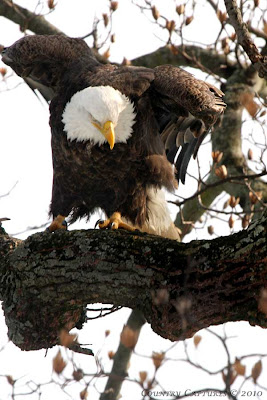 Such was not the case as it was merely repositioning itself to a more comfortable spot on the branch.

When viewing and photographing Bald Eagles I cannot help but think of how they were perceived by our forefathers. First over the objection of Benjamin Franklin the Bald Eagle was named as our national bird, and then followed the slaughter. As a predator they were lumped with all other predators into a class of wildlife considered vermin and to be killed any way possible. Alaska even paid a bounty for the killing of eagles which resulted in the death of some 128,000 eagles over 36 years, ending in 1953.

I am sure glad that people have come to their senses about the Bald Eagle.These pictures show a majestic bird.
Blessings,Ruth

Hi Coy,
Just splendid... This is a majestic bird and your pictures are really great!

Leave it to "man" to destroy everything beautiful and wonderful. Glad it was stopped before this majestic bird was totally extinct.

Beautiful photos of one of my favorite birds (after the Loon of course.) I think its a miracle every time I see one. Amazing to think people would kill these wonderful creatures back in the day.