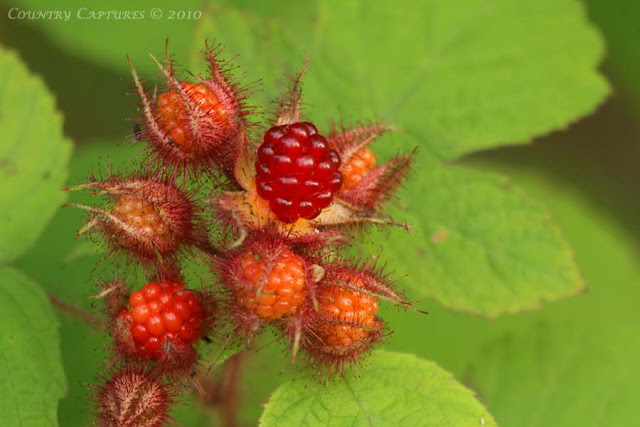 Noticing that the wild raspberries along the roadsides were beginning to ripen my mind drifted back to a large raspberry patch I had located while deer hunting a couple of years ago.  Tossing the high boots, bucket, and chainsaw onto the pick-up bed I headed up the old logging road to check it out.  Three trees had fallen across the road but the Stihl chainsaw made short work of them and soon I was surrounded by an abundant crop of wild raspberries.  I soon noticed that I wasn't alone as quite a few birds were busily flitting about the fruit laden brambles and a couple of areas revealed the unmistakable sign of a bear having gorged itself with the bountiful harvest.
. 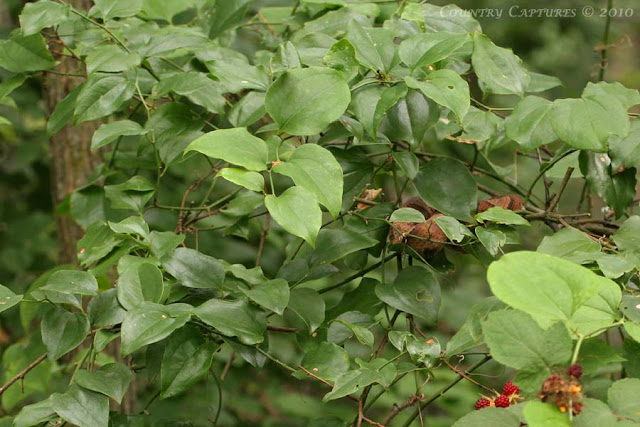 Wading into the berry patch filling my bucket as I went I was brought up short when I noticed this snake lying just above a bunch of berries I had just picked.  Notice the three berries in the right foreground and the fruit pod to the right that I had just picked.  This encounter was just a little too close for comfort, the distance from the snake was scarcely a foot! 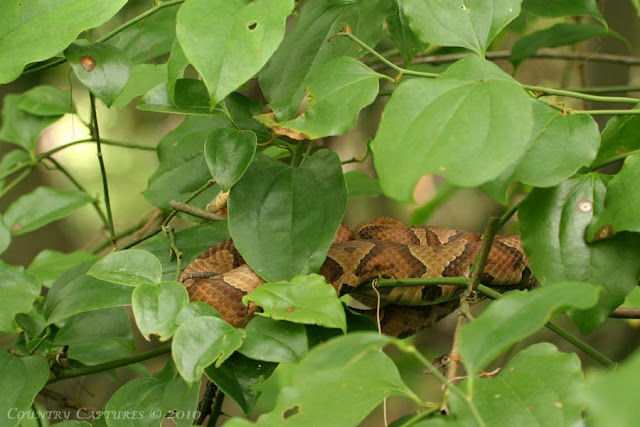 Slowly moving back to a safer distance, I picked my way back to the truck where I left the berry bucket behind returning with the camera instead.  The snake was still in the exact same position as what it was when I first sighted it.  Look closely and you will see the Copperhead's head pointed directly away from the camera. 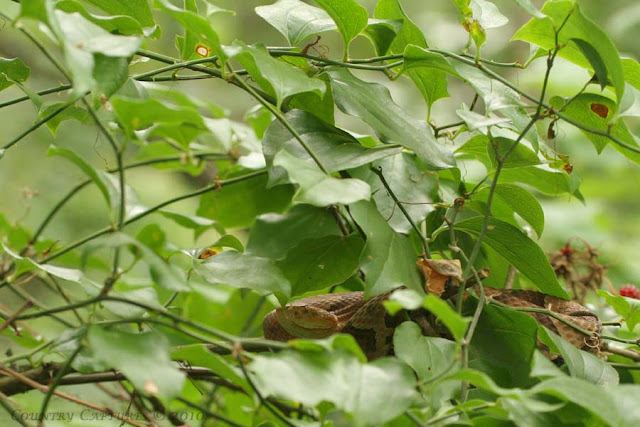 Moving to the snake's left I was able to get a decent view of its head.  As Copperheads so commonly do, this snake chose to remain totally motionless during the entire encounter.  Copperheads are not aggressive snakes but neither do they normally retreat at signs of danger.  Stepping on a Copperhead can lead to a serious situation when the snake lashes out in self defence; and so to can picking berries too close to a hidden viper. 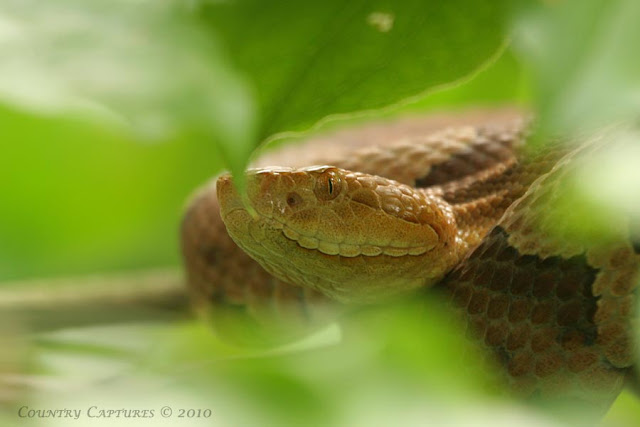 A close-up shot shows the snakes head and the heat sensing pit located below and in front of the eye.
The Copperhead is classified as a pit viper because of these heat sensing pits.
I made this shot using the 400mm lens with a 25mm extension tube attached.  This combination allowed me to capture a good close-up image while maintaining a safe distance from the venomous snake.
After reviewing the image on the camera's LCD and finding that I was satisfied with the results I returned the camera to the truck and resumed berry picking in a different part of the patch.
At an earlier time in my life this encounter would have ended differently but with a growing appreciation for our natural environment and the native creatures that inhabit it I have developed a much healthier attitude towards our fellow creatures.  If the only choice presented was to sustain a bite or kill the snake, undoubtedly I would kill the snake.  Here the choice was easy; move away that we both could live to another day.
For more Critters of all Kinds
Visit our friend Misty at
Camera Critters
Posted by Coy Hill at 7/17/2010 04:45:00 PM

WOW! I think I would have dropped the bucket and run. (But then, I do irrational things sometimes when confronted with slithery things.)
I'm glad you went back for your camera.

Close encounters eh Coy.
what a grand post and pics.

Yikes! That would have been too close for me,raspberries or not.
Blessings,Ruth

I think this encounter would have increased my heart rate somewhat!!

Wow - that's a pretty close encounter. I applaud you that you moved on to leave the snake alone.

Wow! This encounter has a familiar ring to it for me. Once I was in a rasberry patch along a trout stream taking a break. Reaching fpr the berries, a large timber rattlesnake gave me fair warning lying on a log in the bramble. I was so startled I literaly fell over backwards and made my escape.

Mercy! I would be high tailing it away from there ~ I am not a fan of snakes of any kind, size, shape or form. I love raspberries though!

That was too close for comfort! I find I am getting to lax and not looking closely enough for the snakes-that is a good wake-up call.

Great photos of a close encounter of the raspberry kind. Fortunately we don't have the selection of snakes you get so our raspberry picking is normally a lot safer. Well done for keeping a calm head and getting these great shots.

Yikes! I'm happy to say I've never seen a copperhead in my neck of the woods. Glad your encounter was a peaceful one.

Yeah, it would have taken me a moment to get the courage to approach with a lens, then add the extension tube to get closer... I would have, but again, gathered up the courage! It gets my blood pumpin just thinking about it! Well done Coy!

Wow! I've never seen one in the wild. Even though he's dangerous, he is beautiful too. Those eyes are wild!