Wetlands: The Other Ducks 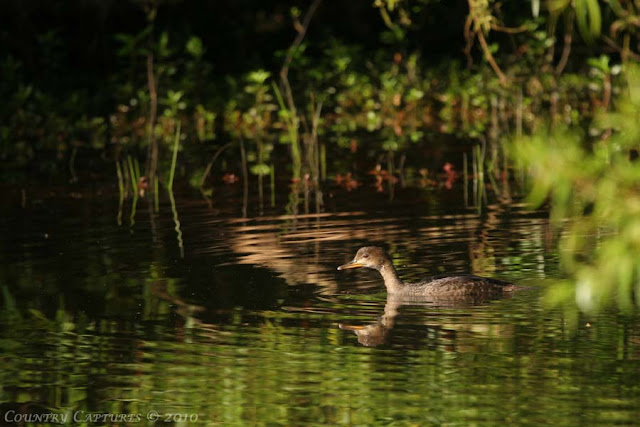 While the Wood Ducks are the most commonly observed duck at the local wetlands, they are not alone.
I observed a hen Hooded Merganser with a brood the same evening as when I seen the first Wood Duck young although I was unable to capture a suitable image.  During each of my visits I have been able to locate at least one young Merganser and occasionally have been successful photographing it.  The Merganser young are often widely separated, not flocking together as the Wood Ducks and Mallards are prone to do.
This young Hooded Merganser caught sight of me as I moved into position one recent morning.  After spending nearly an hour concealed behind a small island it finally moved into view checking to see if the intruder had left.  After only a couple of clicks of the shutter the young bird submerged.  Fortunately for me the bird had chosen a spot with good lighting to check from 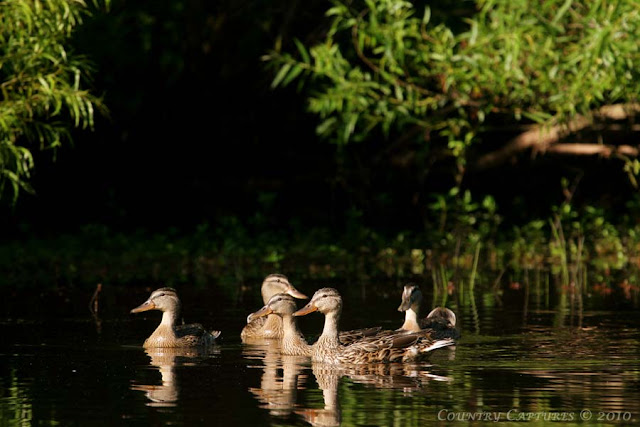 A few minutes after the Merganser encounter this flock Mallards who had flown in a few minutes earlier checked me out from nearly the same location.  I believe this to be a flock of juvenile Mallards as immature birds and hens are very similar.  The bird farthermost to the right may be the mother although the oly difference that I can see is that its bill coloration is somewhat different from that of the others.
Again with only a couple of frames exposed the Mallards scooted to safety, this time behind the nearby vegetation.  In this location I was not hidden nearly as well as I would have preferred and once the camera drew the duck's attention to me they wasted no time in retreating.
Posted by Coy Hill at 7/13/2010 07:44:00 PM

You caught these in such beautiful light. It can be frustrating when the birds don't cooperate with the camera person.
Blessings,Ruth

What a very pretty setting, and yes, the lighting is awesome! You were very fortunate to get some wonderful shots of such skittish birds...

These are so good. Like the lighting and composition. Really do enjoy your blog and seeing what you see.

Oh man, I think the lighting was perfect on the ducks. I relish early and late light and hate Noon time but use it if that is what it takes to get the picture. Your photos are just stunning, Coy.

You could share a recipe on my blog about recipes. Ask your wife for yur favorite. It is getting some magazine coverage I am not at liberty to talk about just yet.

Do you have a homemade recipe you would share with our readers? No, you don't have to be fat to share them.

The way you captured the ducks in the perfect lighting makes a terrific photo.
As always, I love your work. Sorry I haven't been here for a while. Life just gets crazy sometimes.