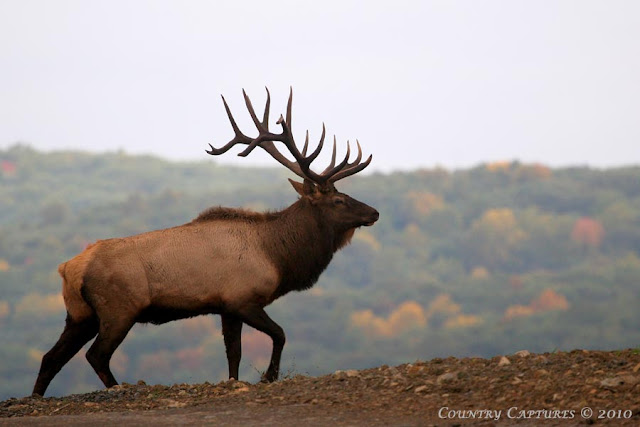 During my stay in Pennsylvania's Elk Country this was the largest racked bull that I encountered.  The photo session with this animal was short as we first sighted him early in the evening as he approached the crest on a hill on a newly reclaimed strip mine.  The bull was walking swiftly and I had to hurry to get into position to get the autumn foliage in the background.  Without this maneuver the photos would have only shown the elk on barren ground with a gray sky beyond.
Another elk viewer who was watching from a distance later told me that he had observed two hunters following this animal and had turned back shortly before he crested the hill.  The hunters would have been the individual holding the Governor's Conservation Tag and his guide. 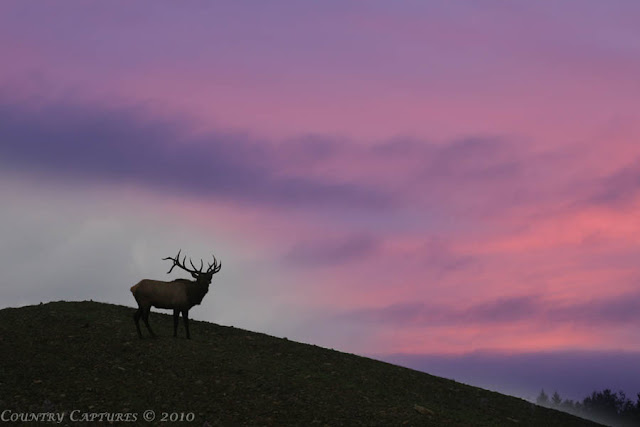 As the bull moved off he stopped to bugle while standing near the crest of the hill.  The overcast skies did nothing to enhance this photo of the outstanding bull.  Replacing the gray sky with a sky shot taken that same morning before sunrise changed the image completely.
Posted by Coy Hill at 10/21/2010 08:01:00 PM

Great shots Coy, I was busy photographing you and Willard at work and never got a shot I was happy with. Replacing the sky in the second photo came out great.

I have my reservations for SNP and the rut I will send you the dates I will be there (5 nights, 6 days).

I plan to make it to SNP for the rut as well... do you know the "best" weeks are so I can start planning? Also, any recommendations as to where to stay?

Absolutely stunning photos! Amazing what the right "sky" can do for a photo. Nice work.

I added myself to follow your blog. You are more than welcome to visit mine and become a follower if you want to.

I am so glad that you got to "shoot" him and not the hunters!

The first shot is fantastic, and adding that sunrise to the second made that a lovely shot too. Good work!

Coy, that last shot absolutely takes my breath away. First the deer in the sunset and now the elk... Oh my friend, your images are so wonderful!