During my visits to the Pennsylvania Elk Range I have noted from a number of conversations that many elk viewers are confused over where that elk are hunted.  For example one gentleman who struck up a conversation while watching a dominate bull and his harem at the parking area located in the bottom of this photograph commented that "they don't hunt these elk".  He was surprised when he learned just how close to this position that legal elk hunting is conducted. 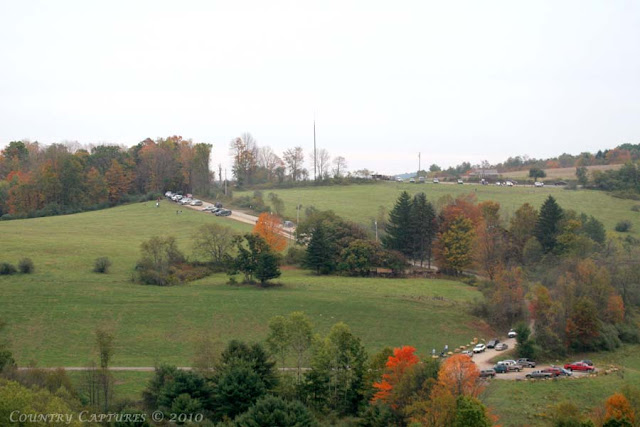 Porcupine Run-Winslow Hill Elk viewing area
This photo was taken from the hillside to the west located in Elk Hunt Zone 2.  The boundary between the no kill zone and zone two is just below the bottom of the photograph. 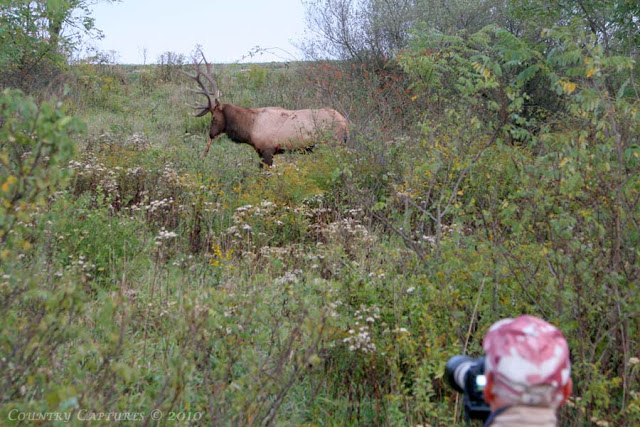 Our friend Richard accompanied Willard & I Wednesday morning when we walked into Zone 2 to photograph elk at one of Willard's favorite observation spots located on the wall of a retention pond.  On the way back we encountered this young bull polishing his antlers.  This photograph was taken with a 24mm-105mm lens set on 50mm focal length. 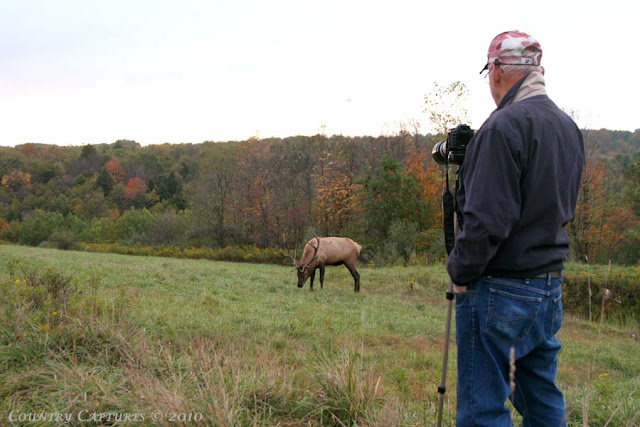 With his mock combat finished the bull moved closer to a food plot and began grazing.  This photograph was taken at the 24mm focal length.  Remember some will claim that Pennsylvania elk hunting is conducted well away from the viewing areas and that the elk in the kill zones are "wild" elk and are not the same animals seen around Benezette.  Not only was these images taken in hunt zone 2 but they were taken while the individual possessing the governor's conservation tag and his guide was archery hunting elk in this exact area. 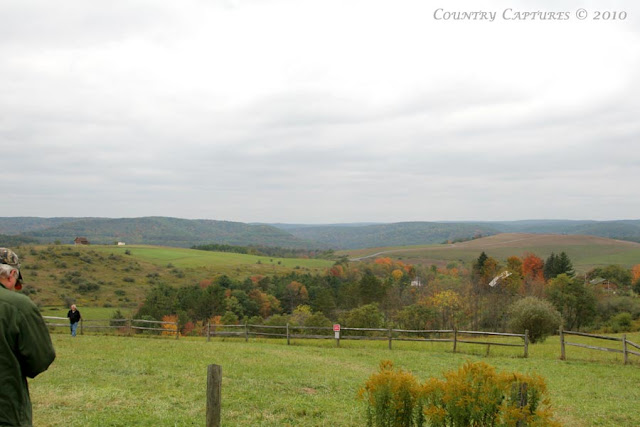 Photograph taken from the Porcupine Run-Winslow Hill viewing area bordering the Winslow Hill road.
The area center right of this photograph where the ground cover is a mixture of brown & green is in hunt Zone 2.  I overheard one individual discussing with another about how he would like to be drawn for a tag for this area.  He stated that he wants to kill an elk but wants it to be a fair chase hunt, not a high fence hunt where the elk cannot get away.  I shudder to think that anyone could think that hunting elk anywhere near this area could conceivably be considered fair chase hunting.
Pennsylvania provides some of the very best elk viewing to be found anywhere thanks to the habitat around these and other viewing areas and the acclimated animals that will allow visitors to watch with wonder as these magnificent animals go about their daily business with scarecly a concern for the people standing nearby.
Posted by Coy Hill at 10/03/2010 07:04:00 PM

WOW! That is beautiful scenery. Nice elk too!!

It's just so beautiful there. The Elk are magnificent as well.

We often visit Yellowstone in the fall. Judging by the landscape and the elks familiarity with people this would be akin to hunting elk on the parade grounds at Mamoth Hot Springs. Fair chase? Ha!

Coy, it was great to see you this past week. I always have fun, even if it is raining most of the week. So many great people to talk to and enjoy there company. Great photos as usual over the last three posts. Nothing like photographing elk in the hunt zone while asking them to pose, yeah I would call that shooting fish in a barrel. With any luck $35,000 will just purchase more food plot and no trophys.

By the way I noticed the photo you picked for your header. It is a great photo, the sky was amazing that night and all I got was the tractor.

Take care and I hope to photogrpaph a few whitetails with you soon.

Wow i'm amazed you can eb so close! Incredible and beautiful scenery and pictures Coy. Congrats.

Hi, Coy! It was great seeing you again this past week. I had the pleasure of photographing the elk with Willard down in the field at the bottom of Porcupine Road. It was late in the evening and the bugling was heard all around the mountains. The elk sure are amazing and beautiful creatures. I prefer to shoot them with my camera so we can keep viewing and enjoying them!

Your area is beautiful, and your critters are amazing. I shudder too when I think of that being interferred with.

Great stalking and images Coy, are they not just handsome creatures~

Coy
Nice series of posts and great photos to go with them. The archer was successful and I believe a rifle was used to finish his "kill". It is sad how something as grand as we have here has to have a dark side to it.