Wednesday was mostly a dreary day and evening was no exception.  Willard & I had spent a couple of hours attempting to locate elk and finally spotted a good bull and his harem on a ridge top.  I decided to approach them while Willard moved on looking for other opportunities.
I spent about an hour with the bull & his harem as other bulls would approach only to be driven off by the dominate bull.  With the poor quality light I was unable to capture any stunning images but the experience was certainly enjoyable.  As the evening progressed I noticed movement below me and was pleased to see our friends Buckwheat and Odie approaching.  Photographing elk and talking shop is always fun and this was no exception.  As the light began to fade Odie headed back down the hill while Buckwheat & I positioned ourselves to capture a few late evening skyline shots. 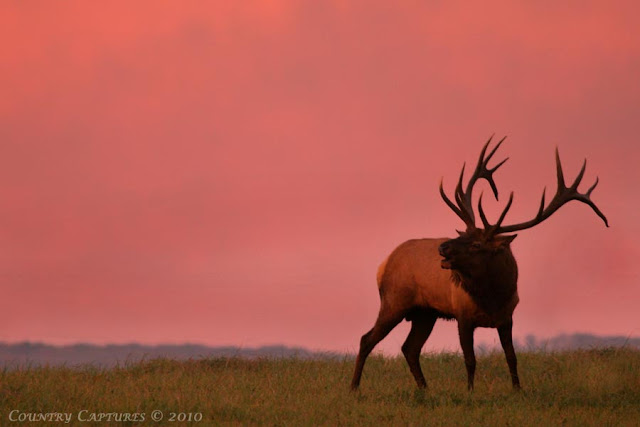 Unexpectedly the sky began to take on a beautiful hue cloaking the landscape in a garment of magical colors. 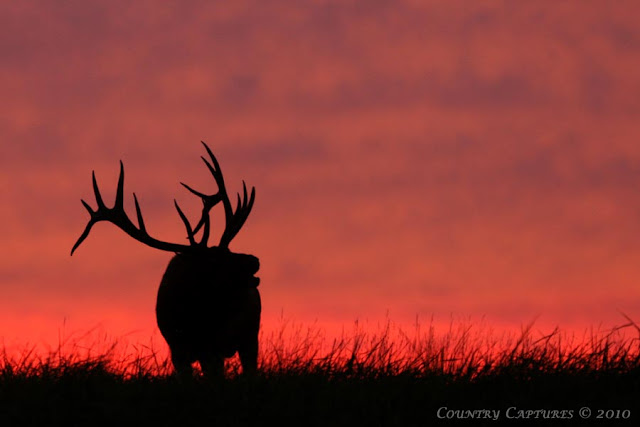 Calling Buckwheat's attention to the sunset I suggested that perhaps we could get some silhouettes, Buckwheat's response was "come on"!
Hurriedly we dropped off the hilltop and swung around the elk positioning the dominate bull against the brilliant sky then waiting for the poses worthy of a photograph. 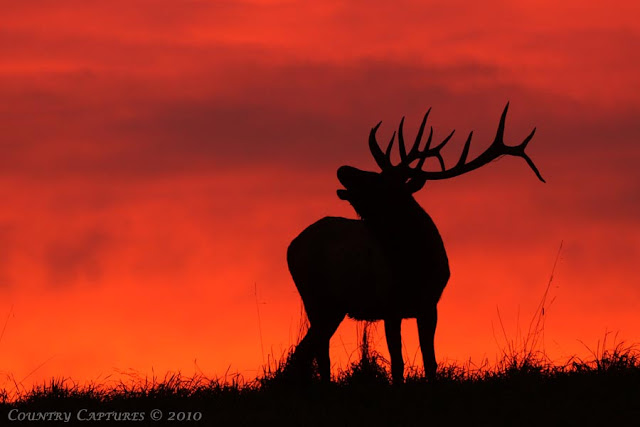 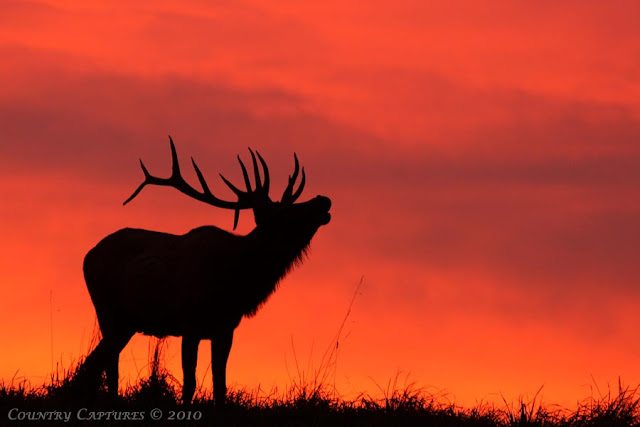 And then this one 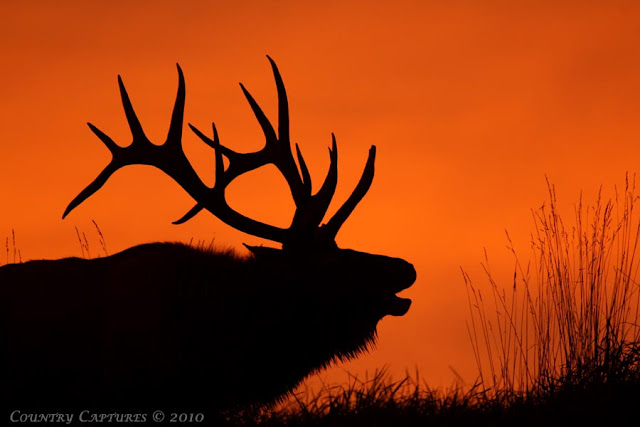 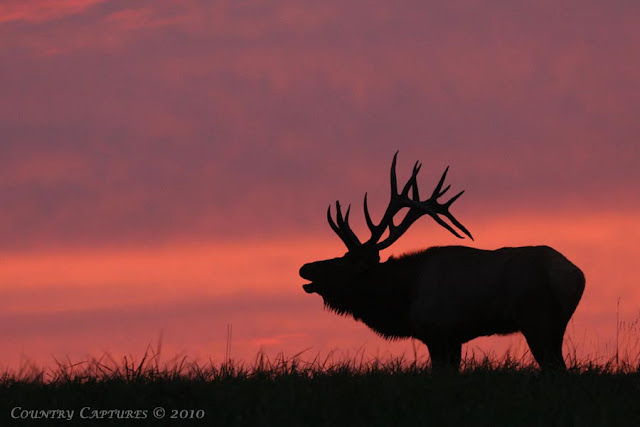 In the rapidly fading evening light the dominate bull screamed his defiance at the nearby bulls after successfully defending his little harem.
Carefully traversing the steep landscape in the gathering darkness my mind kept returning to the incredible twenty minutes I had just spent with the elk.  The beauty of the stunning sunset, the throaty bugles of the bulls, and a collection of new elk silhouettes; what more could a wildlife photographer want.
I have only one word to describe the evening............PERFECT!
Posted by Coy Hill at 10/05/2010 07:30:00 PM

These are fanastic pics!!!

Wonderful backgrounds and foregrounds. And by the way, "Moo," or something kind of like that.

Perfect, indeed, Coy! You captured some amazing photographs of these bulls and the sunset. Awesome shots!

WOW!!! There are no words to describe the beauty.
Blessings,Ruth

Amazing photos, the colours are incredible. Thank you for sharing that experience :)

Wow these are breathtaking pictures Coy, masterpieces! Gosh, I cannot even tell you which one I prefer... I love them all and the light is awesome! Congrats mate!

I agree Coy PERFECT is the worg, for the awesome shots you got that night and for making me feel like you are rubbing it in when I know you are not. I love my tractor shot but I love these even more. I had uploaded today's and Friday's post before you made this one so I directed people to your new blog header.

I had a great time up north and enjoyed seeing you again. The friends one makes up there make up for a poor rut season. I am looking forward to next years already. Maybe we can get a day or two in at SNP for the rut next month. Many 8 pointers running around there the last two days.

It was fun, Brad.

Absolutely gorgeous! Thanks so much for sharing them with us!

These are awesome photos! The sunset gave you the perfect background. A perfect evening indeed! It certainly made up for the rain you had the rest of the time.

The evening we were there there were lots of elk, but the light was not very good and my photos only so-so, but the experience was wonderful. Without your guidance I would never have known to go to Winslow Hill and we would have missed out on one of the best parts of our visit to PA. My thanks to you.

All I can say is FAB U LOUS!

WOW! I mean really WOW! Incredible series of shots, and yes, I would agree, perfect! Congrats! Don't you wish you can relive it over and over!

Wow wow wow.. These shots, the colour, the mighty elk - they all take my breath away! Magical moments.