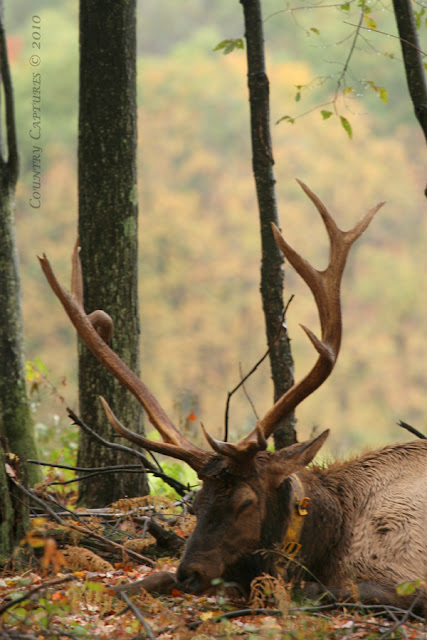 Resting peacefully as yet another rut passes by
Back in the day Fred, AKA bull 36, was the King of Winslow Hill but now in his advancing years a quiet resting spot is more preferable than a harem of cows.
During my recent visit to Pa's Elk Country Willard & I located Fred resting near the new Elk Country Visitor Center while a light rain fell.  This was my only sighting of the famous bull during this stay.
I was amused by how often Fred sightings were rumored around the viewing areas as many people excitedly told us about Fred's whereabouts.  I heard of Fred being seen bugling, fighting, etc.  It soon became clear that some good folks were misidentifying other collared bulls as Fred.  One time the bull turned out to be 8A, a much younger bull who is now in his prime. 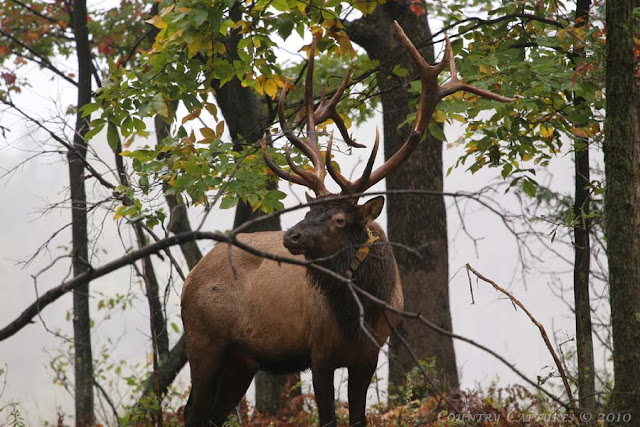 8A
Another bull who was being misidentified as Fred was the young bull 2A.  This fellow has a few years to go before he reaches his prime. 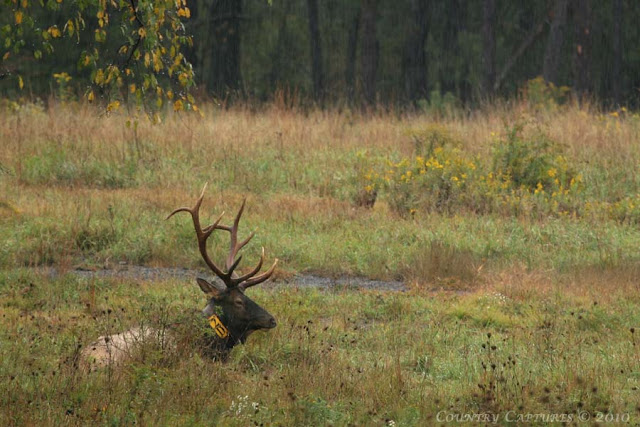 2A
When Fred passes on will one of these bulls fill the void left by "Fred"  Pennsylvania's Most Famous Bull?
I hope so but with most bulls being killed during the hunt before or upon reaching their prime the chances of a bull reaching Fred's status is very slim.
For more photo's of Fred throughout the years visit Willard at Pennsylvania Wildlife Photographer and for more
Critters of all Kinds
Play along with Misty at her fabulous
Camera Critters Blog
Posted by Coy Hill at 10/09/2010 09:59:00 AM

He is truly magnificent!

What a glorious critter!

What spectacular shots of this gorgeous animal. Those antlers are amazing.

You were a conservation officer -- can't something be done to limit the number of bulls killed? Like cancel the hunt, say, every second year?

Your bulls in the sunset are absolutely beautiful, by the way. And the sunsets with the bulls are beautiful, too. LOL

Are you sure that second image isn't Fred dreaming about his glory days? I feel privileged that I was able to see Fred and photograph him during our visit to Winslow Hill. How often do you get to take a photo of a legend anyway?

Wow, these are gorgeous shots of the elk. They are amazing critters.

I lived in PA for 4 years and never knew there were Elk there...what a shame to have missed them.

Lovely series. They are so majestic. It's a pity that they can be hunted. Sigh....

He is a wonderful good old elk and deserves his peace and rest. There was a proud old elk bull in the Rocky Mountains near Estes Park that some goofy man went and killed and they have a nice tribute for the resting place of this fallen wonder~

I was around him many times in his prime and he was a gentle monster, but what an awesome wonder he was to behold.

Excellent series of pictures and thanks for the story of Fred. A shame that very few bulls can reach it status because of hunting!

Thanks for the update on Fred. I was wondering if the ole boy was still around. What a magnificent creature!