Some Thoughts on Hunting 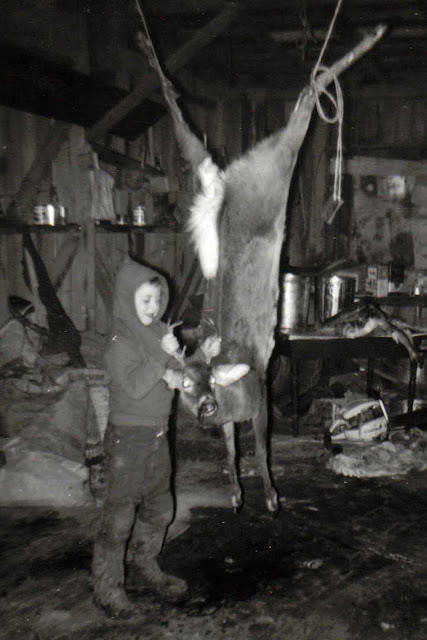 Myself admiring one of my Dad's bucks during my early years
I grew up on a small farm in rural Pennsylvania.  Deer hunting was a fact of life and venison was a staple on our dinner table.  Each fall we butchered the hogs on Thanksgiving and buck season opened the following Monday.  Mom would always hold the sausage until she had some venison burger to mix with it to increase the lean content.  Harvesting deer and butchering the hogs, no difference, it was a way of life; a way of putting food on the table.

A I grew older I could hardly wait to join the red-coated men as they went hunting for the mysterious critters that wore antlers and as soon possible I was out there with my little hand-me-down Winchester M1892 38-40 shooting Remington Core-Lokt 180grain slugs.  My first two bucks and a doe fell to that little rifle and what a thrill it was!

As time went by I continued to hunt.  I became interested in longer range rifles, better accuracy, good optics and learning more and more about those mysterious creatures of the wild.  I hunted everything that our area of Pennsylvania offered and I must say I enjoyed it immensely.  My intense interest in hunting took me to the Pennsylvania Game Commission where I served as a Deputy Wildlife Conservation Officer for 23 years.  Although a deputies busiest days were the peak hunting days I still found time to pursue my hunting and balance both with my full time career.  During those years I also found time to visit Ontario for bear hunting and Quebec a few times in pursuit of Caribou.

As the years passed these mysterious denizens of the woodlands were no longer so mysterious and I began to understand that as much as I enjoyed watching the wildlife that when it was killed it was no longer there.  Seems pretty simple to understand, but its not when your view of the wilds is full of mystery, you just knew that what was killed was only the tip of the iceberg, there was always plenty more just below the surface where they could not be seen, a bigger buck just over the next knoll; or was there?

I remember a favorite uncle of mine who hunted with a gang some distance from home telling of all of the does the gang killed.  I remember him saying that it seemed that the more they killed the more there were.  Then a few years later the gang broke up and he began hunting closer home.  Why?  Well they just weren't killing the deer like they used to.  And I wonder why?

Yes I still hunt (consumptive) some and yes I still consider venison a staple on our dinner table but now I question the hunting community more than ever.  I full well realize that the reason that we are blessed with the wildlife populations that we have today is because hunters demanded wildlife departments and laws to protect wildlife to provide huntable populations.  I understand that hunter dollars finance wildlife management and have paid for the reintroduction of many of the species that uncontrolled slaughter decimated or eliminated from many areas.  I also understand that certain keystone species must be kept in balance with the environment and hunting is the most economical way to do this.  But I do call into question some of the things people are doing in the name of hunting.

Anyone who visits this blog regularly knows that I am opposed to the Pennsylvania elk hunt as it is currently conducted.  The elk that live in or visit the elk viewing areas around Benezette and Winslow Hill have no fear of humans yet the bulls are targeted annually in a "trophy" hunt.  How can an animal who has no fear of humans become a "trophy"?  I don't know, the concept escapes me.

Recently the story of "Bozo" the 879 lb tame bear broke here in Pa.  It seems that a man fed this bear from the time it was a cub up until shortly before it was killed by a group of three archers.  It is said that this huge bear was a frequent visitor at a local resort and people would gather just to see Bozo.  The man who fed him could pet him, hug him, and lie down against his side.  Wild bear...Not!  Many in the hunting community demonize this man for feeding the bear; crying its illegal to feed a bear!  Yes it is, Now; but he fed it for 17 years.  It wasn't illegal when he started and only in the past few years has it been unlawful.

The man who killed him said that he had hunted "this bear" for three years but then is surprised when what should have been the pinnacle of his hunting career is called into question.  If you wish to read more about the incident click Here and Here or just Google Bozo tame bear.

Apparently the shooters knew full well that the animal they turned into a living pin cushion (7 arrows shot by three people) was this exact bear and knew full well this animal's history from some of the comments posted on hunting forums allegedly by members of the party.  Then I read a poll on an archery hunting forum asking who would or would not shoot this animal if they had known its history.  55% said they would shoot!  Is this what hunting has devolved into?  Is this what hunting is all about?

Last Saturday I took a good friend who is an avid hunter along to visit the local bear check station on opening day of bear season.  There were some very nice bears being brought in along with a number of small cubs.  Looking at the kill map I noted two kill sites with three pins sticking in close together.  Speaking with one of the men on duty they confirmed my suspicion that these sites denoted where a mother and her cubs were killed.  While there my friend overheard a person bragging about his gang getting up four bears and killing them all.  It turned out to have been a sow with three small cubs.  Killing cubs is legal in Pennsylvania, a bear is a bear in the PGC's eyes.  Every time I have talked with my friend since he keeps bringing it up saying how pathetic it is for hunters to do this.  He questions why that its legal, then says "that's not hunting".

Back when I read the hunting magazines I remember they portrayed most hunters as ethical sportsman who were careful to do their best, be beyond reproach and represent the sport of hunting well to the non-hunting public.

Now I read the message boards, see what real hunters think and I question; do I really want to be a part of this?  Its no wonder that so many hunters are concerned about the "anti's"; quickly branding everyone who doesn't agree with everything they do with this negative tag.  Hunters have become their own worst enemies, Along with what I mentioned above are high fence hunts where some "hunt" admittedly tame animals for "trophies" not to mention the poachers who know no limits and have no boundaries.  I have came to the place to where I don't want to be called a "hunter" any more.  55% of respondents would knowingly kill a tame bear roaming free, 20,000 apply for a Pennsylvania elk tag each year hoping to shoot an elk that has no fear of humans.  The hunting community attempts to portray hunters as being for the most part good decent people with deep concerns for our wildlife and our environment with only a few bad apples but 55% would knowingly kill a hand fed bear, that's a majority not just a couple of bad apples.

What ever happened to hunting?  Or has it always been this way?  I have never known an anti hunter to become a hunter but I do know a hunter that is very close to becoming an anti.  Thanks a lot guys your doing one heck of a job.
Posted by Coy Hill at 11/25/2010 07:38:00 PM

Well said Coy! This should be submitted to a few local newspapers, etc.

A very well written piece. It closely parallels my history and feelings on the topic as well. I have quit visiting the hunting forums as I find that most of the individuals that post there have very different viewpoints on hunting, killing and the ethics surrounding it than I do.
Thanks for sharing such a well written piece

Coy, I enjoyed seeing the photo of you as a child. I also have a few of those of me but I think I will pass on posting them.

I could not agree more with this post. I am not at the anti hunting point yet even though I have not hunted since 1988 but I am against certian hunts and hunting just to kill. I stay away from forums since they only make me angry, but it took me a few years to learn that.

A very well-written piece. I prefer to "shoot" wild animals with my Canon Camera. I'm still sick about the shooting of the trophy Bull Elk you posted.

Well written post. Hunting to put food on the table is the only acceptable hunting as far as I am concerned. I have never understood trophy hunting and hunting just for the thrill. Hunting needs to be done in a responsible manner and with respect for the animal. The actions of the individuals you wrote about is contemptible.

Well written and I couldn't agree more, there have always been folks that have abused hunting, it just seems like it has gotten easier to do so these days.

Well said...I am really afraid about what is going to happen here when NY gets done gutting the DEC due to budget cutbacks. It is going to be awful.

On kind a funny side note. My daughter's boyfriend is from rural PA and is a turkey hunter. He had no luck this season however when they were up to visit us recently a couple of turkey walked through the back yard...@:}.......Michelle