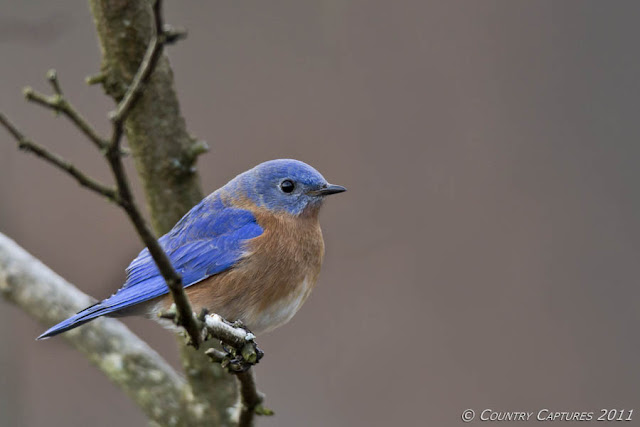 As 2011 passes into history I look back at my outdoor photographic endeavors and marvel at what an incredible year it turned out to be.  Posting to Country Captures, I was frequently at a loss for words but never for wildlife images.  The year started with visiting the eagles at Conowingo early in January, then  on to Pa's elk herd in February, and then to Middle Creek for the snow geese migration in March.

By early April the waterfowl migration was going strong around home and combining fishing and photography filled the freezer with fresh fillets and my computer with image files through May.  June and July were spent near home photographing the waterfowl young, whitetail fawns, and the bucks as their antlers grew.

Come August it was on to Shenandoah National Park in search of velvet and SNP seldom disappoints.  A highlight of the August trips was encountering the blueberry eating coyote who, although he kept the deer on alert, showed no interest in eating anything other than the berries.  September found me in Pa's elk country photographing the rut.  While I didn't capture any images that really grabbed my attention it was a good trip with a number of good bulls to photograph and a quite a few great guys to shoot the bull with.

October as always seen the foliage change from a uniform green to a coat of many colors.  Whitetail activity picked up as the first stirring of the pre-rut began exciting the deer herd.  A day trip to SNP was just the ticket for pre-rut buck images.  Migrating waterfowl began to show up at the local lake as the birds began their southward journey.  Fall waterfowl photography is never as productive as the spring, the migration moves faster and hunting pressure makes the birds very wary.  The month ended with the opening of Pa's elk season and for the first time I was there with Willard to document the hunt around Winslow Hill.  We photographed the events as hunters killed a human habituated bull on the hillside facing the viewing area.   By the time the season had ended a number of the habituated bulls that had thrilled thousands of viewers were dead; a sad note to end the month on.  It was also on this trip that I heard the story of the bull shot by this years holder of the Governors Conservation Tag.  It was told that he arrowed bull #22; a bull that was collared with a transmitter.  The wounded bull escaped only to die eight days later; 4 1/2 miles from where he was initially shot.  If it hadn't been for the collar he would not have been located.  The bull was alread spoiled by the time they got there;  only his antlers could be salvaged.

November brought on the whitetail rut.  Thanks to Pa's antler restrictions and a number of trips to SNP it was the most fantastic whitetail rut I have ever experienced.  The rut was winding down by the time SNP began closing the middle district during the night and Pa's deer season opened; the two events that ended my season of buck photography.  With the ending of the rut my photographic attention turned to feeder birds.

Birds and squirrels have been my targets the last few days but I am already beginning to feel the need to put the wheels on the highway in search of bigger and better things for 2012!

It is always a treat to visit your blog.The images are excellent and a joy to look at. Happy New Year.

Happy New Year, and I'm really looking forward to more of your wonderful photography in 2012!

Wishing you all kinds of wonderful wildlife sightings in 2012.

Love love love that blue bird. Hard to believe but I've never seen one with these eyes in all my travels. I'll probably be looking until my final days.

wonderful photo of the bluebird

Happy New Year to you!! I love your Squirrels.....In reading your post you sure do get out a lot to shoot at so many various locations. That is awesome!! Hopefully this year I will also be out shooting more and posting more as a result. Take care and Happy New Year!! Aloha, Renee :)

Yeh you got a fantastic year and we did too through most of your messages. I wish you a fantastic happy and glorious (photographic) new year (and also a healthy one)....