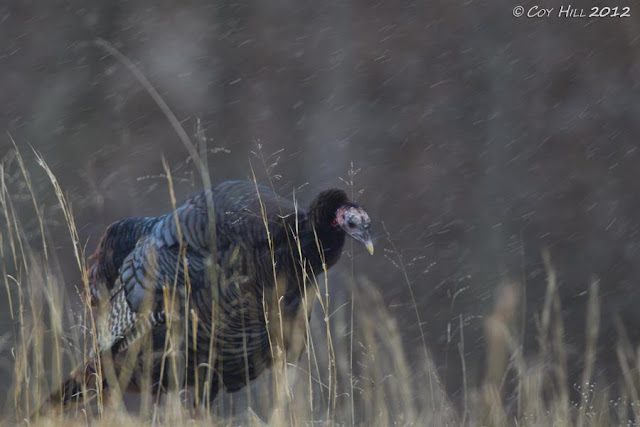 Yes, I know the weather is cold and sometimes dreary, but wildlife photography opportunities still exist for those willing to endure the numbing chill.  Migrant species that summer here have long since departed but for the wild turkey there is no choice other than to spend the entire year on their home range.

While the wild turkeys are mainly interested in feeding at this time of year, the occasional fight does break out when two flocks meet.  Within a month the gobblers will begin feeling early stirrings of the mating season; gobbling and fighting will become more common.

I photographed this gobbler during a snow shower early this morning as he fluffed his feathers in a display of dominance toward another gobbler.  Today the display was all that was needed to force his opponent back off.

Beautiful shot of the "Gobbler"!! Love your blog.

i really like the wispy grasses in front, and the snow coming down. :)

Love that you captured him in the cold rain. I tried to find one in an old house on Monday, but the only thing I found were some quail (no pics though).