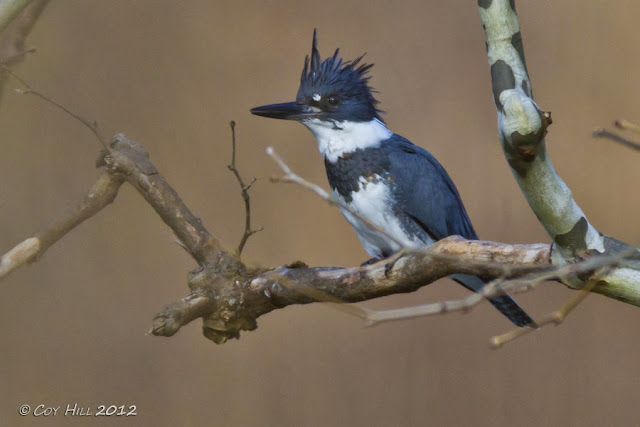 Stopping by a local creek to check for waterfowl I caught sight of a belted kingfisher sitting on a branch overhanging the water.  With no chance for a photo because of intervening brush and a locked gate precluding me moving the car any farther my only chance for a photo was to get out of the vehicle.  As I expected the kingfisher flew away as the car door opened.

Moments later the kingfisher flew past again.  Looking at the overhanging branch I realized that it was a perfect lookout spot.  Knowing that kingfishers will use a favored perch repeatedly I decided there was a good chance that the bird would soon return.  Setting up the camera rig I waited motionless and was rewarded with the kingfisher returning withing about 15 minutes. However I had not taken into account a nearby tree just to the left of the perch.  Although I had a clear view of the bird the out-of-focus tree washed soft color across the image keeping it from being the image I had hoped for.

At times it is desirable to use nearby out of focus objects to impart softness and color to an image;  however this time it was not the case. 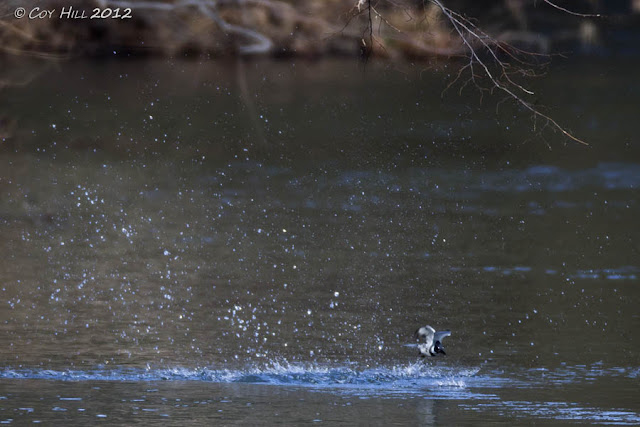 A short time later I spotted the kingfisher a considerable distance way creating quite a commotion.  I have observed kingfishers catching fish by diving but this bird was flying low over the water repeatedly submerging and emerging.  My guess would be that it was taking a bath, however I am not familiar enough with kingfisher behaviour to be certain.

What a beautiful bird with interesting hairstyle :)
Beautiful photos, too.

Coy, great capture! I've found the Kingfisher to be rather elusive. Very quick to flight. Glad you got a decent shot of one!

I love his wild hairdo :)

This is a great picture. I have seen them taking a bath this way,but that would sam like what he is doing.

Love the Kingfishers, but they're not easy to photograph. It may not be the image you wanted, but it's still good.

Great shots! I hope to see one again at a nearby body of water to the west of us this year.

Maybe not quite what you had in your mind's eye, but still a very nice shot!

The Kingfishers are one of my favorite birds.They seem to spook easily around me. Great sighting and photos.

Beautiful pictures. I find kingfishers difficult to capture and you did a great job.