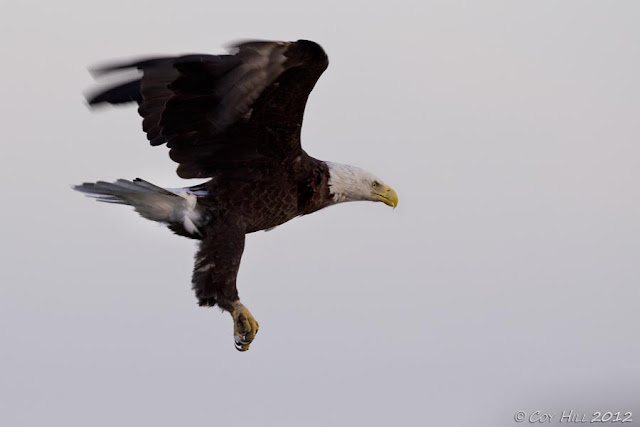 Joe Overstreet landing is a spot noted on the Great Florida Birding Trail.  At one time the endangered Whooping Cranes could be seen here regularly but I have not observed them during my 2010 visits nor this year although I was told that one had been spotted on a nearby island lately.  However Joe Overstreet even without the Whooping Cranes remains a worthwhile spot.  Arriving as day began to break I immediately noticed a pair of eagles perched on the post supporting the boat docks.

Not knowing how acclimated they were I cautiously moved in to a suitable position and awaited better light.  As the light improved I shot a few images of the stationary birds and soon a vehicle arrived to launch a boat.  The fishermen readied the boat and one walked over to chat and mentioned they they would be ending my fun.  I replied that that was no problem as I was waiting to the eagles to take flight.  Imagine my surprise when they launched the boat and the eagles showed no visible concern!  Moving in even closer I continued to wait for the birds to do something more photogenic than just posing. 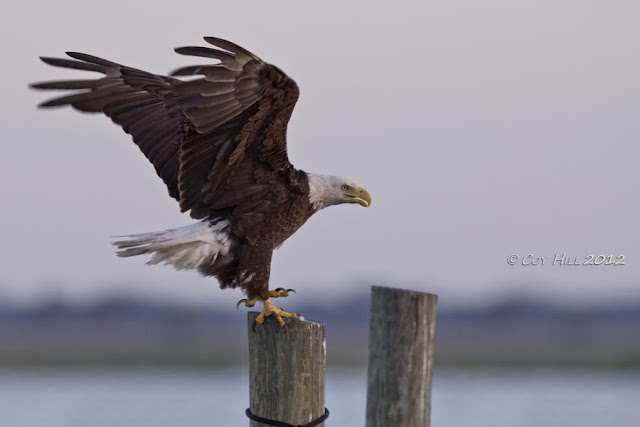 As the sun began cresting the horizon my wait was rewarded as one eagle decided to go after a shore bird feeding nearby.  No being ready at the moment I missed the take-off and the bird easily evaded the eagle's attack.  The eagle circled about coming back in for a landing on it favored post.  This time I was ready panning the 600mm and shooting as it swooped in. 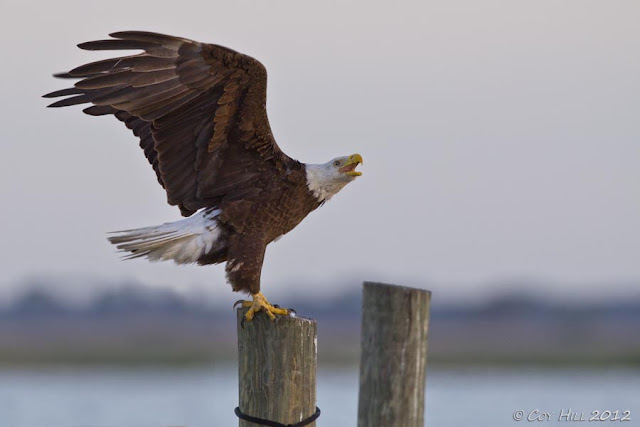 The best shot materialized as the eagle landed and with wings still outstretched lifted it's head and called.  Moments later it had settled down and was once again just a stationary eagle sitting on a post.

I have photographed bald eagles at numerous locations over the past few years and this bird is the most tolerant eagle I have yet encountered.  The eagles I encounter near home typically become uncomfortable at 150 to 200 yards however this bird seemed undisturbed with humans coming within 15-20 yards.
Posted by Coy Hill at 4/15/2012 08:47:00 PM

Awesome shots. Boy would I like to have that kind of a shoot with an Eagle.

Fabulous! Eagles can be unpredictable at times. I have had some stay while I walk almost up to where they are, and others take off when we're still a quarter mile away. Of course, we're always driving.

I love eagles. Your patience paid off here. I believe the 3rd photo is my favorite but all of the photos are terrific.

Wow I'm totally stunned! What a gorgeous sequence... How on earth did you manage to get there just in the right time!!! Gosh this is simply fantastic Coy!

Fantastic shots, Coy! I would so love to photograph Bald Eagles.