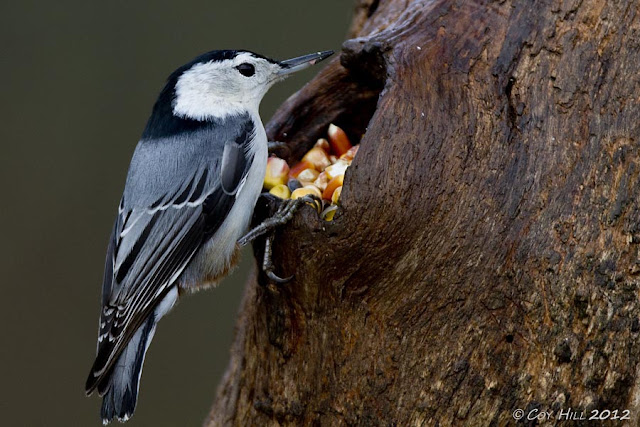 White-breasted Nuthatch
A few weeks ago while pursuing wildlife in elk country I accidentally dropped my 600mm f4 lens with camera attached.  The impact broke the camera mount loose from the rear of the lens barrel with only one small screw remaining holding it all together.  I was impressed with the quick 6 day turnaround from Canon repair and upon initial examination all looked well.
However when I began shooting it was a different story entirely.  Nothing was sharp!  No matter where I focused absolutely everything was at least slightly out of focus.  Further testing revealed that sharpness could be increased by stopping the lens down with each f-stop making an appreciable difference in image quality.  However even when stopping down to f10 the resulting images were not as sharp and a pre-accident f4 image.  Thinking that perhaps the camera may have been damaged as well, although it was working fine on both the 24-105 and 100-400, I tested the lens on my 30D and had my brother test it with his 5D Mark III.  The results between all cameras were the same.
Once again I shipped the lens to Canon repair and once again it returned on the sixth day.  Test shooting last evening in the fading light showed promise so this morning I took it out for a field trial.  The nuthatch image above was one of my many shots from the morning.  Finally after two trips to Canon the lens is again shooting tack sharp and is back on duty, just in time for the whitetail rut.

This looks perfectly sharp.I am happy to hear that Canon gave quick repairs.

Beautiful sharp image of the Nuthatch. Glad you have your lens back.

Glad you have your lens back in perfect shape. This is a beautiful image of a delightful little bird.

Great image! So glad that lens is back in service. :)

Happy to hear that your baby has returned.
Looking forward to more fabulous photos.

Yes I believe it's working fine now. That image is indeed very sharp.

Fantastic picture! Glad to hear your lens is working.

Glad the lens is back in working order! I've managed to drop and break two different point & shoot cameras while on vacation requiring an emergency camera shopping trip. Fortunately the price has come down considerable on those so it wasn't nearly as painful as dropping that big lens.