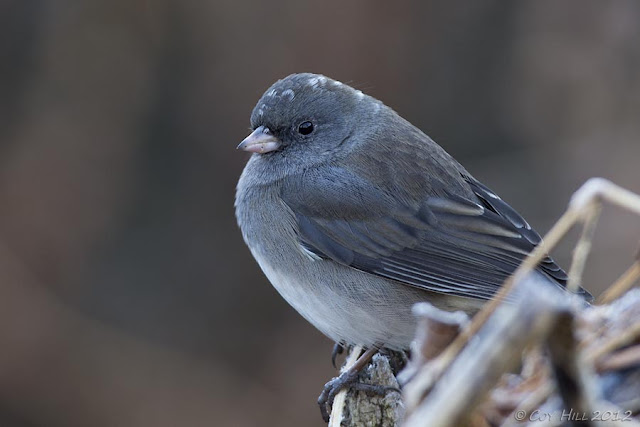 Dark-eyed Juncos are a common enough bird for our area however when I spotted this one I realized that this one was different.  Since it was a cold frosty morning, a morning where even the deer had frost on their backs, at first I thought that this bird had a few bits of frost clinging to its head; something that I had never observed. 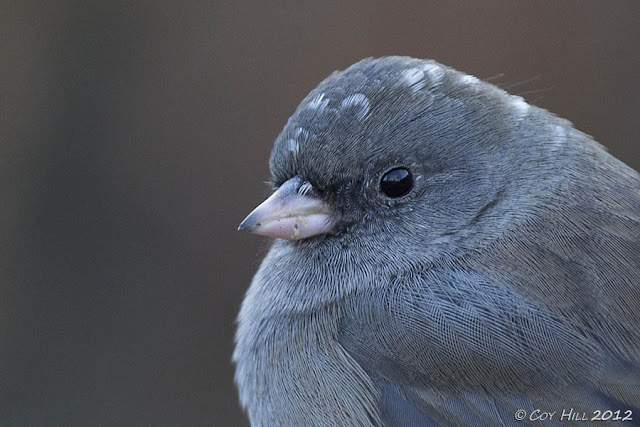 However a closer look revealed some of its head and neck feathers lacked their usual pigmentation.  After doing some research I came to the conclusion that this is a leucistic dark-eyed junco; although the examples I was able to find showed much more coloration difference than this individual.

Through photography I have become accustomed to identifying individuals among some mammal species such as deer, elk, and squirrels.  Now, with the unique markings on this junco, I will be keeping watch to see just how often I can pick it out at the feeders.
Posted by Coy Hill at 11/24/2012 08:04:00 PM

That is ever so subtle a lack of pigment. Amazing pictures.

The camera and computer are a match made in heaven for people like me who cannot see a small bird in nature unless it moves. Only by enlarging it on the computer can I hope to identify them.
Very beautiful captures and identification. Birds, like sheep, seem all alike until you know one in particular.

Beautiful sharp shot and a great observation. I enjoy your photographs. Unfortunately, I can only see them once a week while I'm at sea (10 weeks at the time.)

Beautiful shots of the Junco!

Great shot, and I like the coloration! Looks like he's been to the salon for a "frost" job.

Lovely picture, your Juncos are much bluer then ours here in Ontario. Our Juncos are black, with white chests.

Bob,
This photo was taken in the early morning while the light level was still low resulting in the cold color temp of the photograph. I'm sure that in the same light our junco's appear the same with slate gray to black. Thanks for your comment.