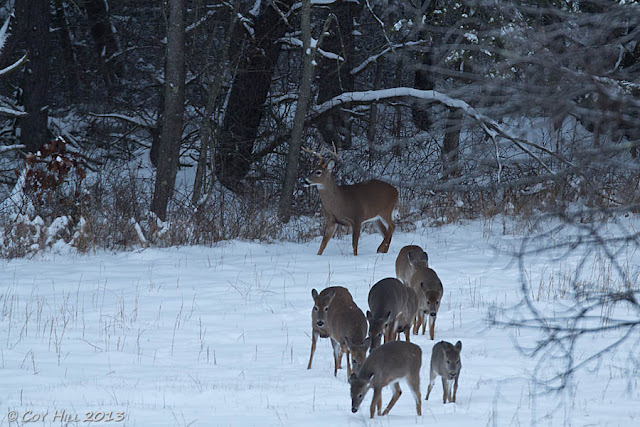 Ten years ago Pennsylvania drastically changed direction in their deer management program.  The two components were total herd reduction coupled with antler restrictions.  Dr. Gary Alt toured the state holding public meetings to sell the new management program.  First and foremost herd reduction was the cornerstone of the new program.  We were told that Pennsylvania's deer herd was too large and was adversely damaging the habitat; that a considerable herd reduction was required.  As an incentive for the hunters to buy into reducing the herd  Dr. Alt offered the second feature of his program, antler restrictions, thus improving the breeding ecology of the herd resulting in large bucks available for harvest.
Deer were practically non-existent in my area of Pennsylvania in the early 1900's.  I well remember my grandfather telling the tale of his very first deer sighing.  I don't know what year it occurred but it was probably in the late 1920's.  As he told the story, a new snow had fallen overnight and sometime during the morning a neighbor stopped by telling him that he had spotted deer tracks crossing a field.  With deer season being in (buck only) they gathered a number of neighbors, picked up their motley collection of guns, mostly single barreled shotguns with slugs, and set off tracking the deer, eventually killing a buck out of the group of three deer.
During those long ago years to be a legal buck a deer must have at least one spike 3" long or a "Y" on one side.  This antler requirement was to remain for many decades up until the current AR became law eleven hunting seasons ago.  During this time deer went from becoming very rare to where antlerless season was established; first a single day, then two days with the occasional extension due to bad weather, and then three days every year.  During the 1960's and 70's the deer herd seemed relativity stable in my area but after the gypsy moth infestation killed the mature timber in the mid eighties, the timber salvage cuts, and the resulting forest regeneration provided nearly unlimited cover and browse; deer numbers skyrocketed.  Where in earlier years a first day of deer season may produce anywhere from none to perhaps a dozen deer sightings, by the early 90's seeing 30, 40, 50, or even 60 or more was not that uncommon.  By the late 1990's much of undergrowth was gone severely limiting the amount of browse available and the deer turned their attention to agricultural crops wrecking havoc.
While we had plenty of deer and plenty of bucks seldom did one see an adult buck.  Most bucks were harvested at 1.5 years of age with many being spikes or three points with some even being small 8's.  Seldom could you spot a buck with 8 points or more with a spread reaching 15".  Buck of this size were so rare that most local hunters considered them "wall hangers" and would frequently have them mounted and display them proudly.  Even the avid hunter would at best harvest a couple of this size in a lifetime; if he were lucky.
This was the conditions in my area at the time that Dr. Alt was selling his new concept of Pennsylvania deer management.
To be continued...........

Thanks Coy. This is very interesting.