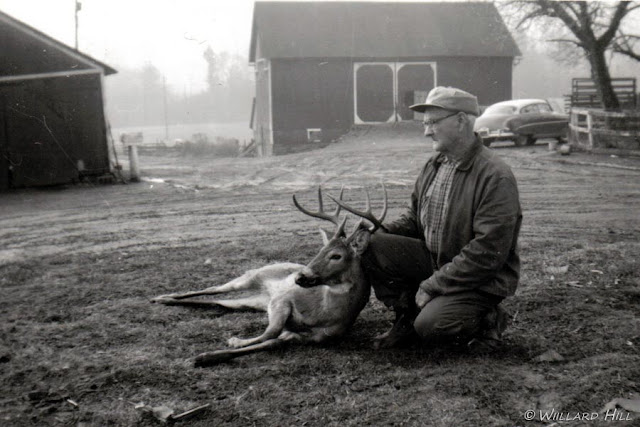 Growing up in a rural farming area of Pennsylvania I had an insatiable interest in wildlife, hunting, and fishing.  The two most anticipated magazines were Outdoor Life and Pennsylvania Game News and I knew nearly to the day when each would arrive each month.  When a new edition arrived I could hardly wait until time would permit opening up their glossy covers adorned with wildlife photos or paintings and consume the contents from cover to cover.  Perhaps my obsession with wildlife was stronger than many of my school classmate, but as we came of hunting age in the mid 1960’s virtually all of us at least participated in deer hunting.  Upon returning to class after the deer season opener everyone was asking the same question, “did you get your buck”.   Not only was this prevalent at our school, but it was the question being asked wherever and whenever the local men met.


At this time most private property was open to public hunting.  Few properties were posted “No Hunting” and most hunters felt free to pursue deer wherever they pleased.  There were two basic hunting tactics being used; stump sitting and driving.  Many hunters hunted in gangs of anywhere from a handful of hunters to as many as 25 with 25 being the most permitted by law.  The gangs would select a section of territory; place standers in spots where the deer were expected to flee, and then push out the section with the drivers.  As the drivers moved towards the standers the drivers would occasionally yell to keep everyone aware of their position.  With most land open to hunting if you were a stump sitter, a person hunting alone waiting on stand, it wasn’t uncommon to find yourself in the middle of one or more drives during any given day of deer hunting.  Regardless of which tactic one was using the presence of gangs beating the bushes kept deer moving throughout the day and increased the chance of getting a shot for everyone.


While scope sights had been on the market for a number of years, they were not universally accepted.  Many hunters still relying on open iron sights; preferring them for the snap shots at fleeing deer.  The rifles they were carrying varied greatly.  30-06's, 8mm Mauser's, .303 British military rifles from the world wars, and even some 30-40 Craig's from an even earlier time were quite popular as was rifles built for the hunting market.  For the gang hunters whose most frequent opportunities were at running deer, iron sighted fast repeating rifles were the hands down favorite.  For these hunters the lever action Winchester 94’s carbines, Marlin 336’s, and Remington 760 Game Master pumps were most popular.  While the stump sitters often had shots at less disturbed deer these fast shooting rifles were still popular among them along with scope sighted bolt action sporters for more accurate shot placement.


That was the way it was, but slowly hunting began to change as land use and land ownership began to transform the hunting scene.  Slowly one by one the family farms gave way to low farm produce prices and increased land pricing brought on by folks from the Baltimore/ Washington area buying up farms for vacation/retirement homes “No Hunting” signs became more common with each passing year.  As the years passed many of the hunting gangs members aged out and younger folks, with less and less open land to conduct drives on either quit hunting or changed their tactics. Hunting magazines, always in business to promote the sale of products, touted increased success using tree stands, ground blinds, scope sights better suited for shooting at still or slowly moving targets and accurate bolt action rifles capable of downing a deer at a considerable distance.  Deer hunters in large part became stationary, tucked away in a comfortable spot on the ground, in a ground blind or hanging on the side of a tree.  With the accurate rifles and good optics the modern hunter was able to identify legal bucks and harvest them at a higher rate than in the days of iron sights.

Not only did the bucks have the firearms hunters to contend with but archery hunting, a novelty in the 1950's and 60's had became very popular.  With two months or more of archery season and a flintlock hunting season added in the weeks following Christmas the chances of a  legal buck making it through to his second year had become exceedingly slim.

Pennsylvania, a state with a long deer hunting tradition, had become a state of young bucks and small antlers.  Few states could match us for quantity of deer and harvest rates, but adult bucks carrying nice antlers were sadly lacking.

That's pretty interesting, Coy. The Whitetail hunters here use tree stands. I often wonder, where is the real sport in waiting for an unsuspecting deer to walk under your tree stand, and then shooting it. I'm no fan of that.