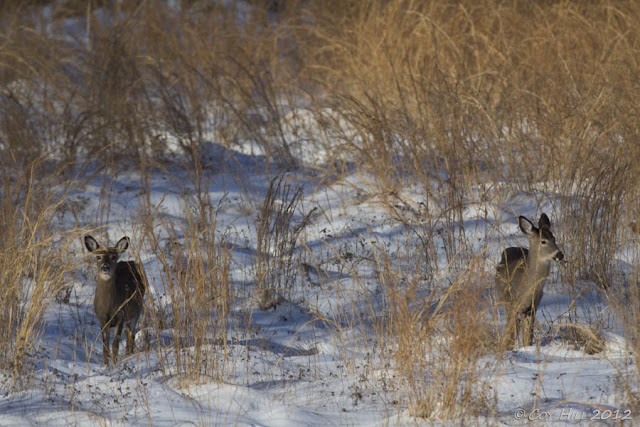 By the late 1990's Pennsylvania's deer herd was booming.  Hunters were experiencing better deer hunting success than ever since the inception of the PGC over 100 years before.  Whereas for decades hunters had been limited to one deer per year, limits had been liberalized allowing hunters with the required doe tags to take as many as three deer and the herd continued to grow.

However all was not well. Forest regeneration was being hampered in many areas of the state as the burgeoning deer population browsed the new growth as quickly as it grew.  Pennsylvania’s Department of Conservation and Natural Resources was said to be in danger of losing their sustainable forest certification because of the extensive deer damage.  Farmers became irate as they watched their crops being heavily damaged or even destoryed before harvest.  As the deer spread to urban areas, homeowners complained of the deer eating their expensive landscape plantings.  Last but not least the deer were taking an expensive and sometimes dangerous toll on motorist as deer/auto collision numbers rose with the deer numbers.

As I was representing the PGC at that time as a Deputy Wildlife Conservation Officer I heard plenty of the complaints first hand.  “What is the Game Commission going to do about all of these deer?” was the question sure to be heard when meeting with a farmer.  The same could be had at a deer collision scene.  At that time the PGC expected officers to remove road killed deer from the state highways; road kill removal, a year around chore, consumed much of an officer’s duty time and particularly in the warmer months was a bit unsavory to say the least.  At one meeting in 1998 our District Conservation Officer noted that in his first year in the district, 1978, he and his deputies had removed a little over one hundred deer from the highways.  By 1998 we were removing over one hundred a month!

After increasing kill limits with little success Dr. Gary Alt was appointed as the head of the new Deer Management Section and began a three year program of holding public meetings around the state to sell the concept of herd reduction coupled with antler restrictions (AR).

Whereas in the past antlerless (doe) hunting had been limited to three days following the regular firearms season; a week long antlerless muzzleloader season in October, a three day October antlerless season for Jr. and Senior hunters, and antlerless season running concurrent with the two week buck season was implemented.  Antlerless allocations were liberalized and the DMAP (Deer Management Assistance Program) was created as a vehicle to provide additional antlerless tags to areas where the landowner (or DCNR in the case of state forest) deemed it necessary to further reduce deer numbers.  This effort to reduce the herd began in earnest starting with the 2001 deer season and antler restriction began the following year.

While doing the research for this post I compiled the PGC's estimated deer kill stats in the graph below.  By 2000 the antlerless kill which had more or been approximately equal to the antlered kill had begun to grow and an even greater disparity can be seen as AR kicks in for the 2002 season.

As the deer herd’s numbers fell hunters began to complain that Pennsylvania’s deer hunting was being ruined.  Rumors abounded as to the reasons and everyone complaining had their own pet collection of motivation but to say that many hunters were unhappy would be like saying Robert E. Lee was unhappy about the outcome of our Civil War.  Hunter frustration became so strong that the strife has been reported in outdoor publications as “The Deer Wars”.  One large sportsmen’s group has even gone so far as to sue the PGC.

Now for my personal view; I love deer!  I love to see deer and I have loved to hunt deer and as the years roll by I much prefer to do my hunting with a camera but I still like deer and am always thrilled to get them, particularly nice bucks, in front of the lens.  However having deer around is not without consequence; like nearly everyone else I drive automobiles.  From the time I began driving in 1972 until 1988 I had just one collision with a deer.  Although my annual mileage did not change significantly beginning with 1989 I began hitting deer, at first it was averaging one per year and by the mid 1990’s I was hitting two and by the late 90’s sometimes three per year.  As herd reduction brought the deer under control my accident rate fell with only one collision since 2005.  With that said I am not a fast driver and am normally very aware of the roadsides in areas of my commute where deer are commonly seen but most of my millage is racked up driving rural two lane roads and much of it at night.  Do I like this aspect of herd reduction, you bet.

Secondly, at least in my area, Alt cannot take all of the credit.  I am unsure of the exact years but it was either 2003/2004 or 2004/2005, we had two very bad winters with snow and heavy crust covering the ground for a month or more.  By the ends of each these winters there was a significant number of dead deer.  I well remember roaming the mountain behind my home and coming upon bone pile after bone pile.  One large landowner who frequently called to deal with poachers restricted hunting on his property to just himself and his immediate family.  Driving through his property in the evening it was common to see 100+ deer grazing in his fields.  With the restricted hunting allowed on his holdings the PGC’s program could not make a significant change in the deer numbers however following those two winters he estimated that the herd had decreased bout 80% and from my own observations I would concur with his estimate.  During these same winters I remember picking up road kills in late February through March and noting how light even the adult deer had become; all were very easy to lift onto the deer rack perhaps no more than 1/2 to 2/3 of their weight during the autumn.  Also following these winters fawns were scarce and throughout the summers their numbers appeared to be very few compared to the number of adult does seen.

It is the PGC's duty to manage wildlife populations for the good of all citizens of the commonwealth; not just the hunter, not just the farmer, not just the forest owner, not just the motorist, but rather for everyone and the focus should be on what is best for the species.  With this in mind it is IMPOSSIBLE for the PGC to make everyone happy and perhaps when it comes to deer it is impossible to make anyone happy.
Note: my personal opinion is based on conditions as I have observed them in South Central Pennsylvania and I do not have personal experience with other areas of the state.

To be continued, next up AR