A Morning on the Elk Range

Our son Chad and his wife Sandy spent a week with my wife and I during mid-September.  Now living in the Orlando Florida area, this was the first Chad had been able to get back home in seven years and was Sandy's first visit ever.  Each day of their vacation was planned with Chad wanting to visit family and old friends.  While most of their time was spent together, Tuesday was a guys and gals day; a day where the guys went their own way to do their thing and the gals did likewise.  For Chad and I the plans called for a day trip to Benezette, the heart of the Pennsylvania elk range while the gals headed for a beauty shop.
Chad and I were on the road by 3:30 am and arrived at our destination around 6:00.  As we climbed the hill, among the elk bugles ringing from the ridges I could hear the deep roar of Limpy, the icon of Winslow Hill.  Heading toward the roar, we soon encountered Limpy with a small harem of cows and a couple of satellite bulls nearby. 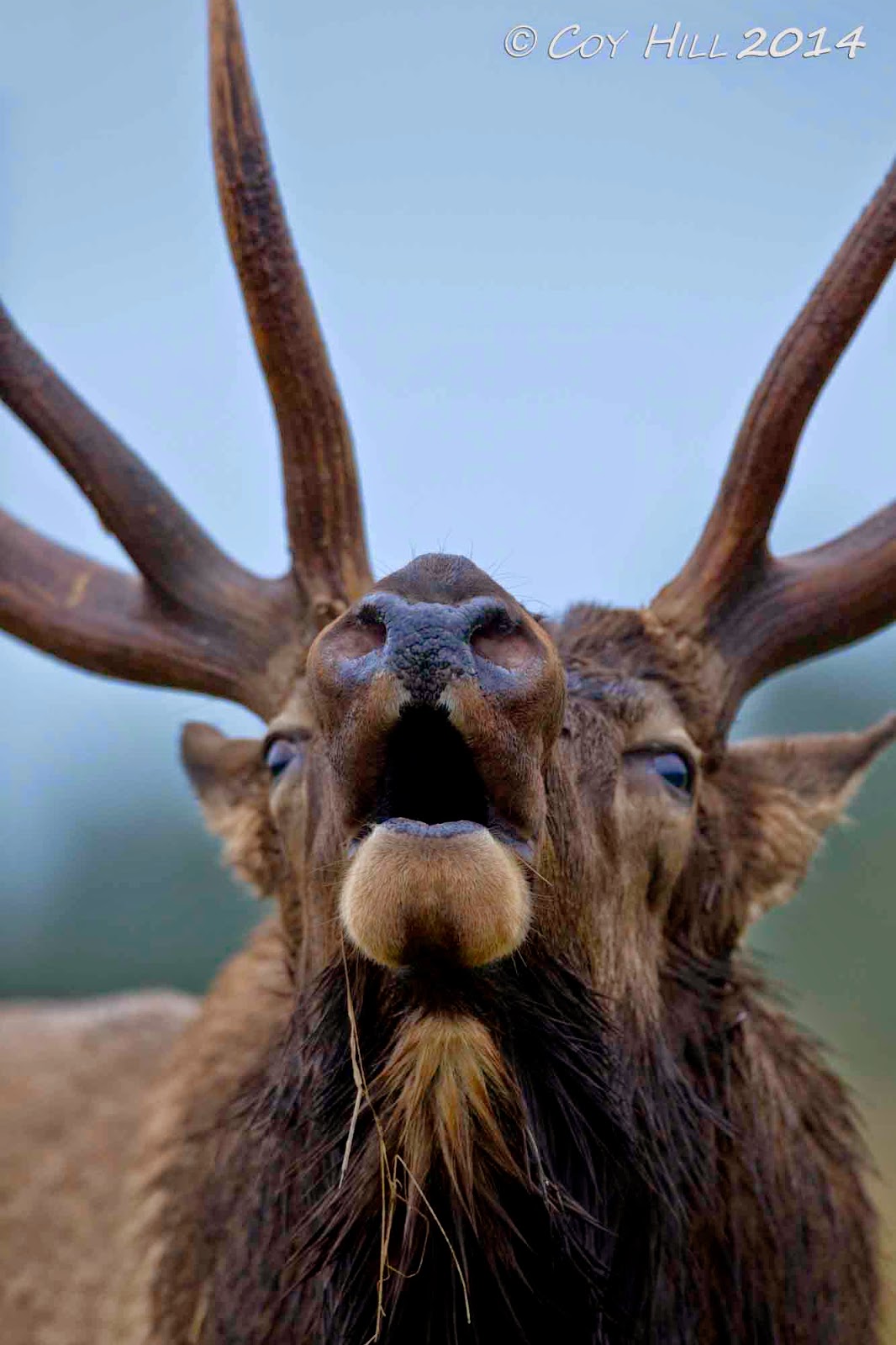 Limpy, named for a limp he developed after becoming injured in a fight during the 2010 rut, is a dominate mature bull.  I have been photographing him each year beginning in 2009.  His photographs have graced a number of Pa Game Commission publications including the current calendar and the Game News. 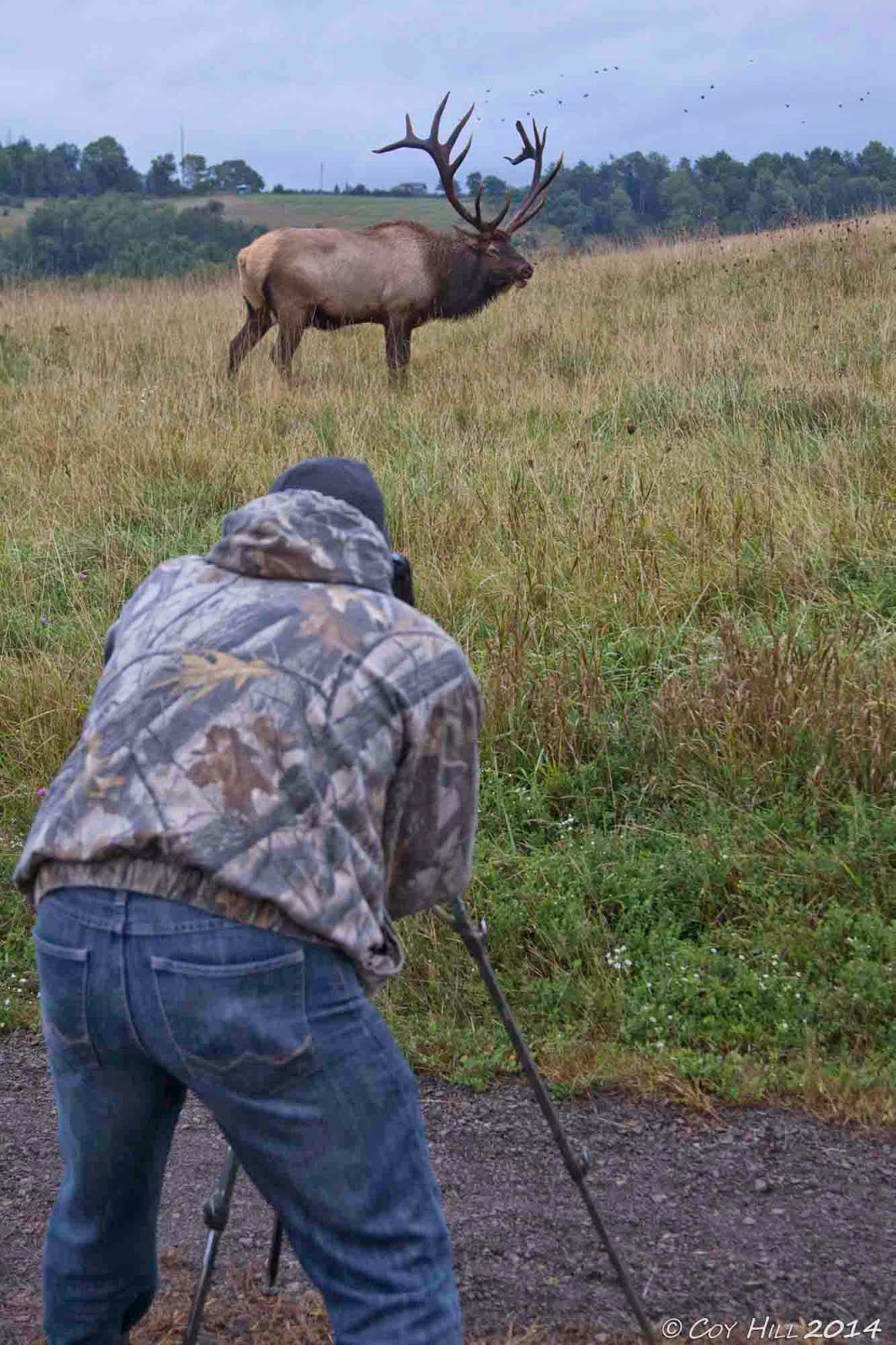 Limpy is a completely trusting animal as shown here while passing between myself and a group of elk viewers.﻿ 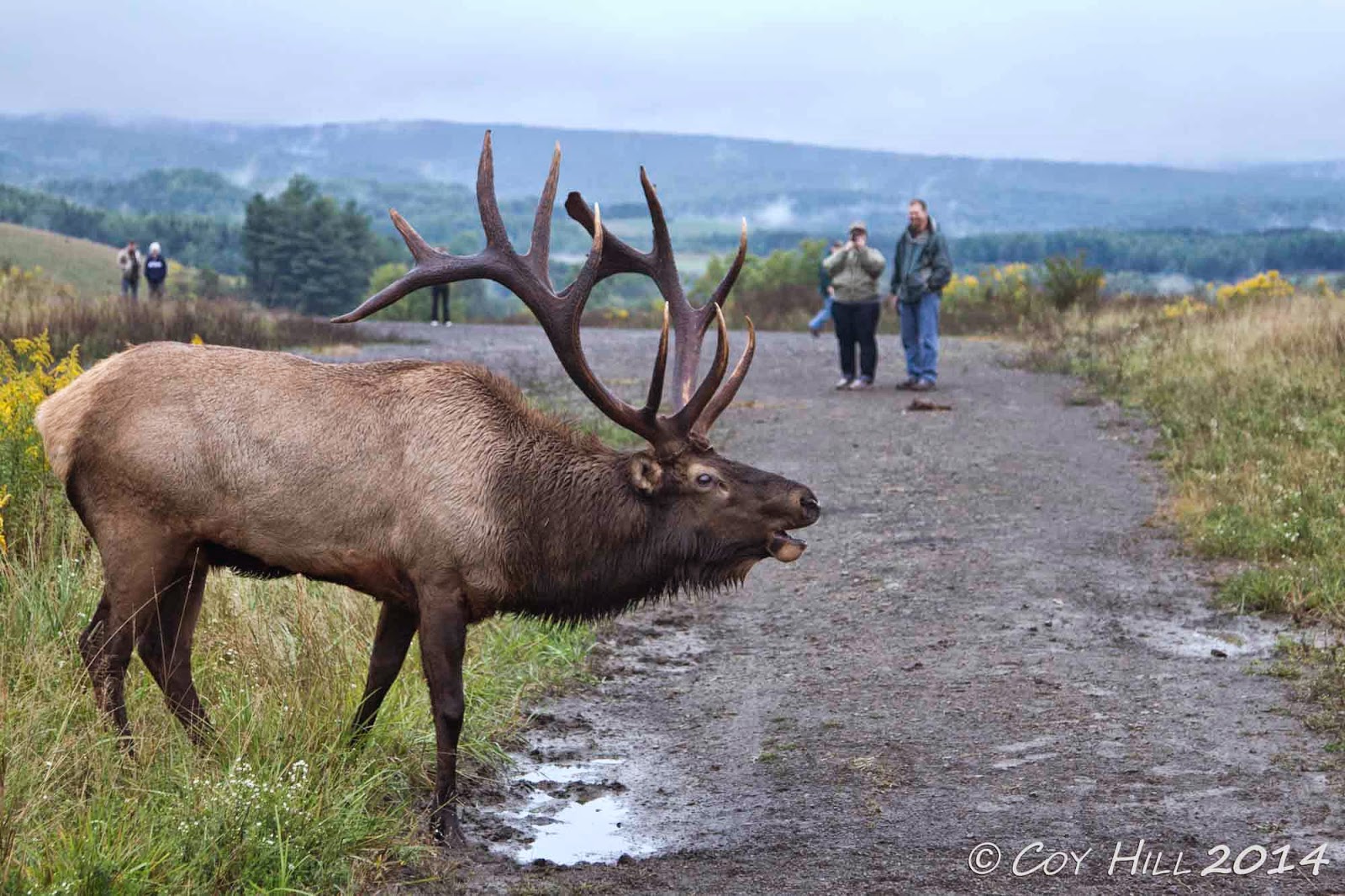 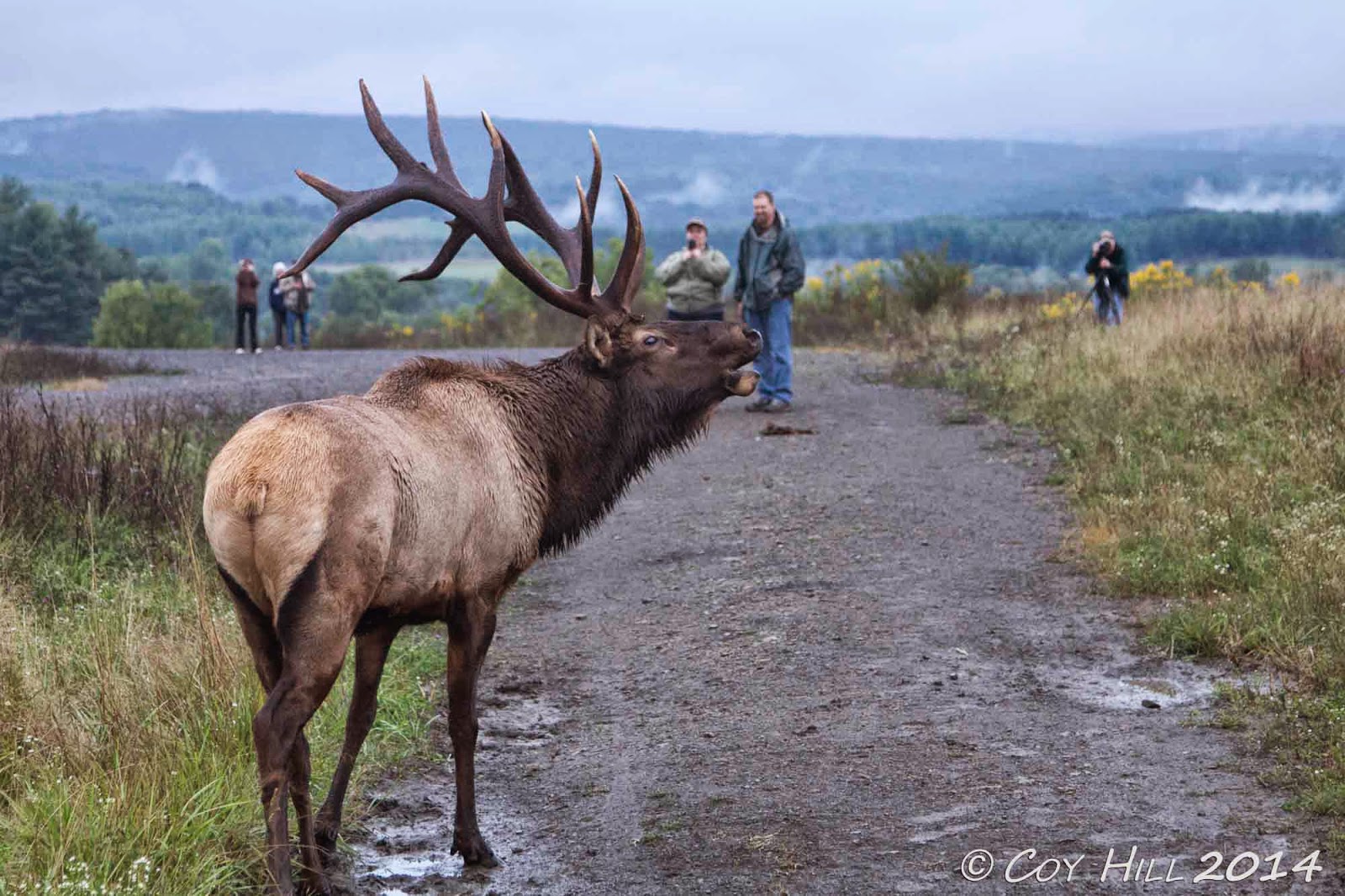 This was Chad's first time on the Elk Range and it wasn't difficult to see that he was enjoying the shoot. 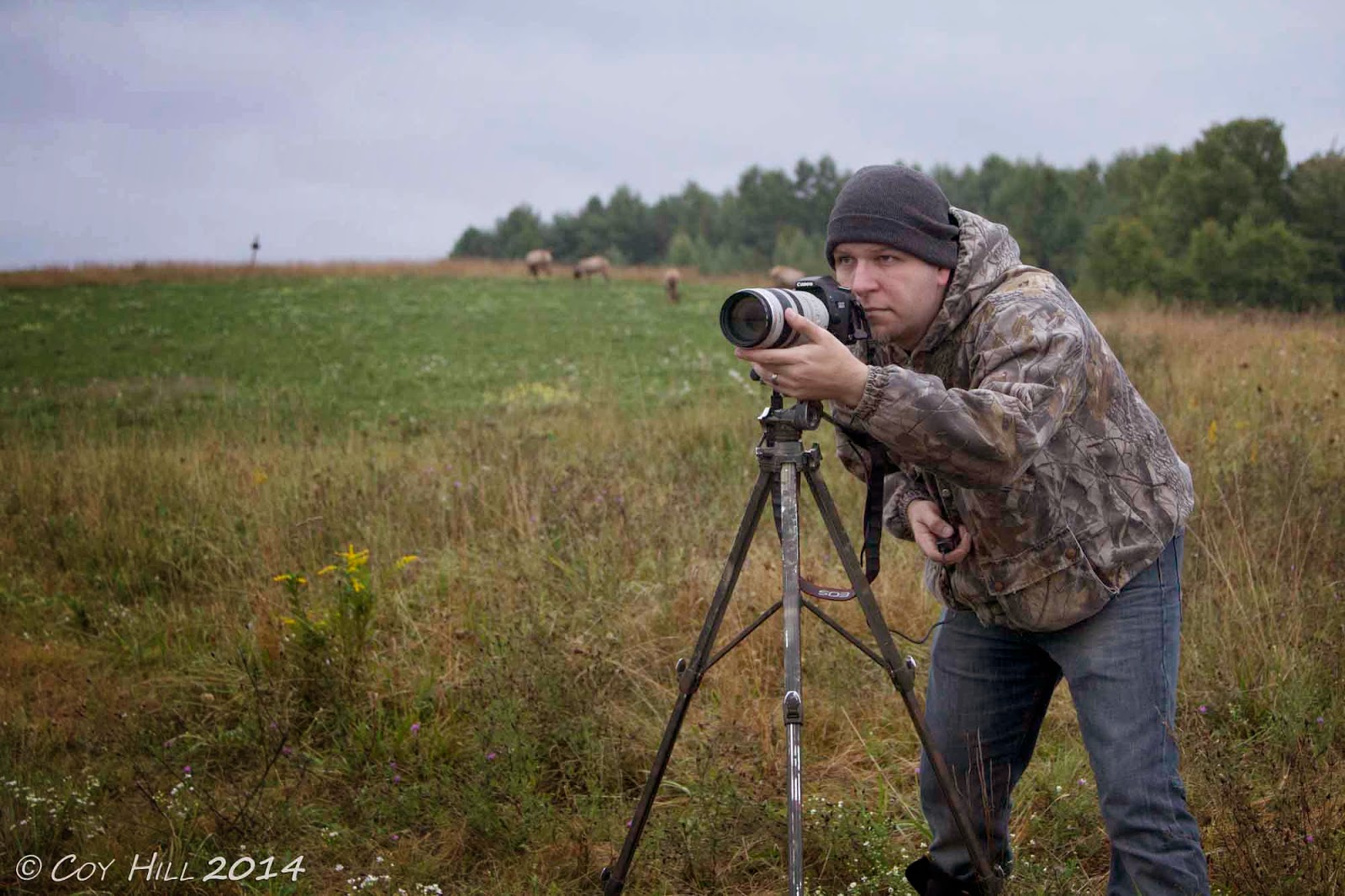 During the course of the morning we spotted a number of other bulls, however the overcast skies and the short mowed grass just didn't provide the conditions for outstanding elk photography that I was hoping for. 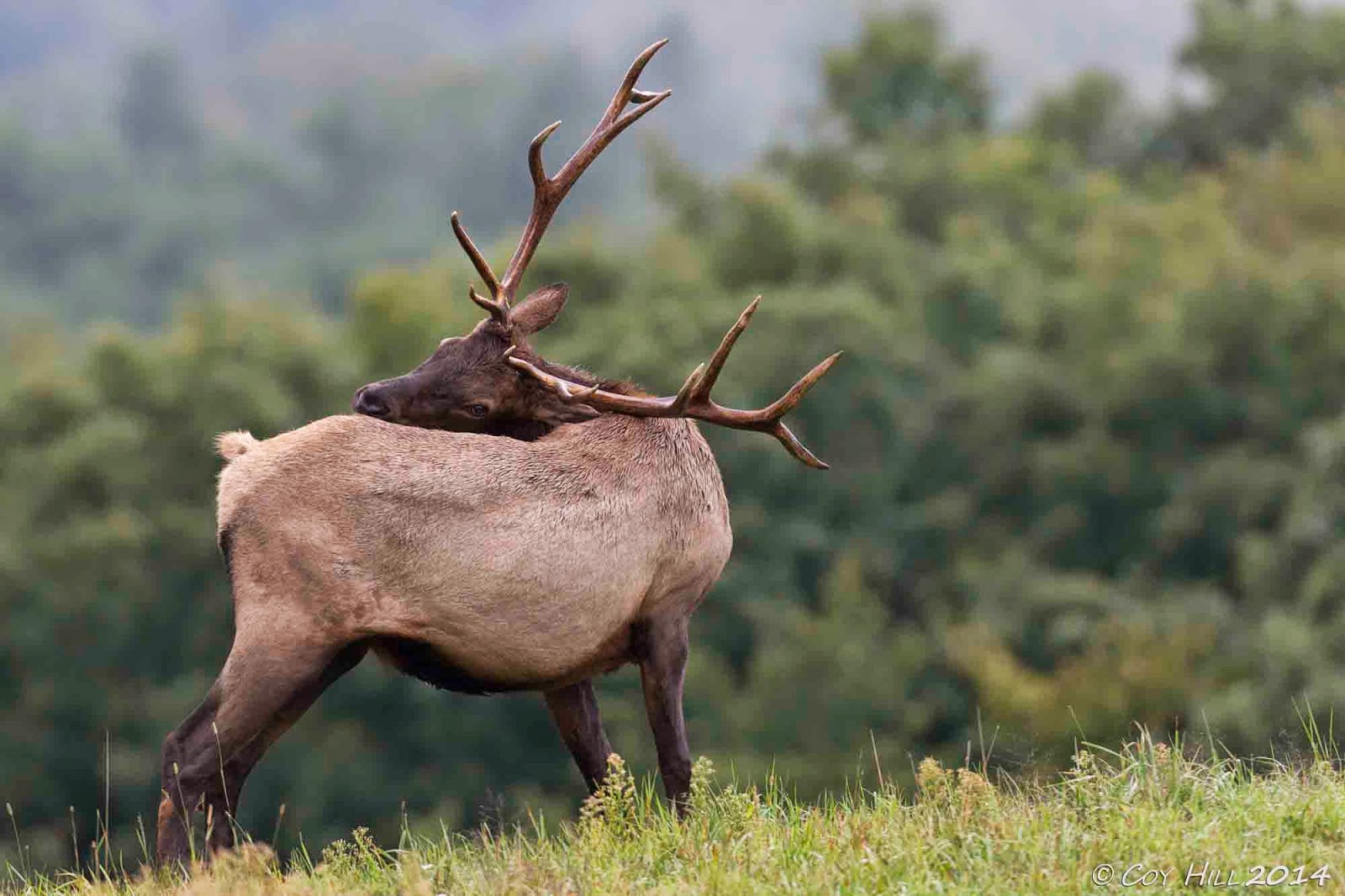 After the elk had retired to the woodland the leaden skies finally opened up with beautiful white clouds scuttling across the sky and their accompanying shadows dancing across the landscape painting in an ever-changing pattern of sun and shadow. 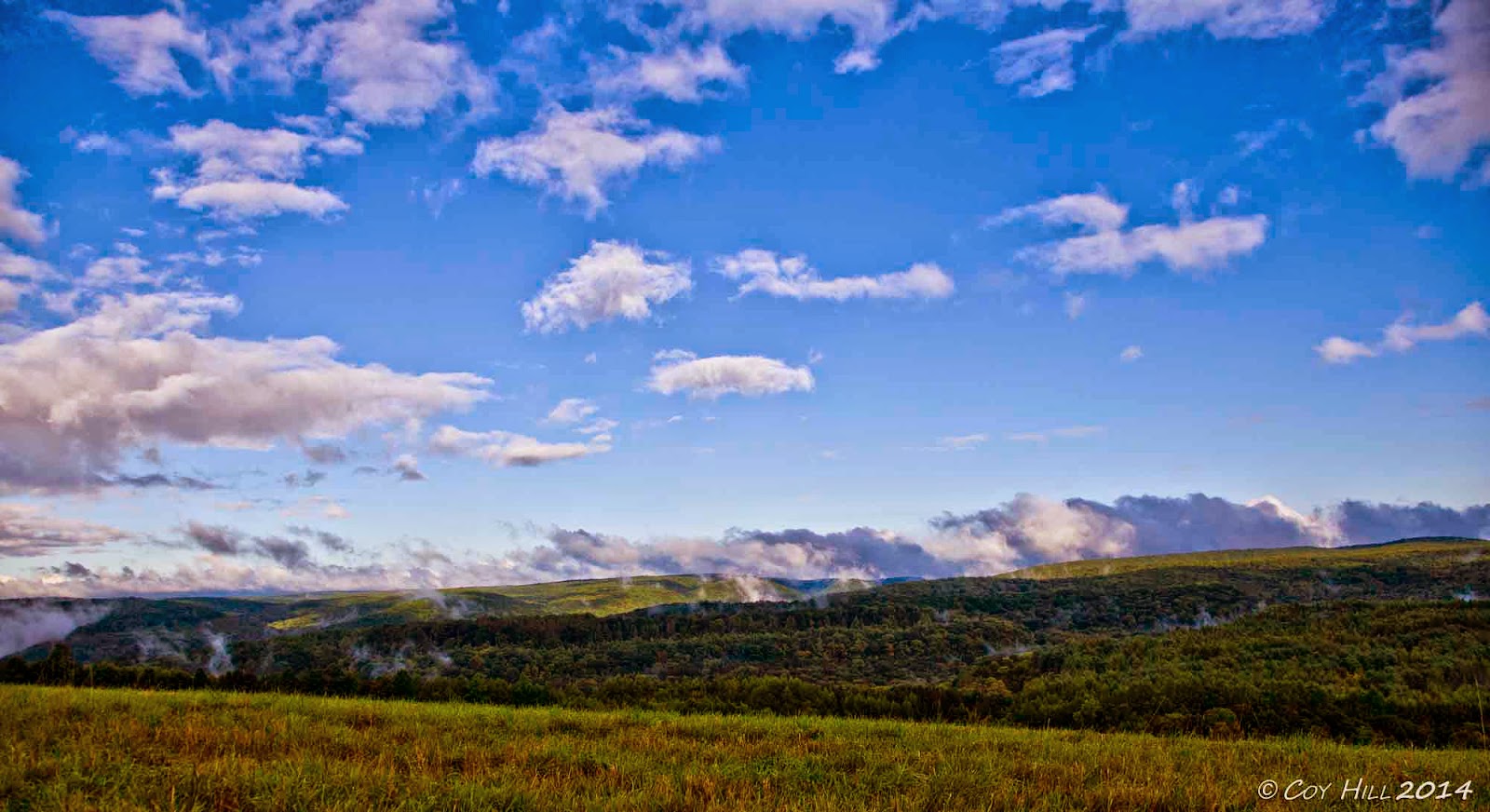 After stopping in at the visitor's center and another stop at the Benezette Store Restaurant for a Big Ben's Burger, it was time to head for home.

While in past years I have been spending the best part of a week on the elk range during the rut; this day-trip would be my only opportunity to photograph the rutting bulls this year.

Excellent photos, Coy. We had planned a week long visit this year, but life had other ideas.

Beautiful photos, Coy, and thank you for your visit to my blog and your comment!

I'm glad to see you got to Winslow Hill for at least one photo shoot this year, and good that you were able to not miss a year with Limpy. Weather conditions may not have been ideal, but you still got some wonderful photos. I especially like that first shot--superb!

Saw Limpy a couple of weeks ago and he seemed really exhausted -- got a video of him and posted it here - http://forestandfield.blogspot.com/2014/10/september-elk.html

Spent over an hour watching and photographing him yesterday and, although he was with some cows and bugled a few times, he made no effort to breed with any of them. He still seemed totally whipped.

Our daughter was in your area last week for the National Labrador Retriever Agility Trials in Gettysburg. Our oldest Lab was honored for being one of the Top 25 in the country. We are sorry we weren't able to be there to enjoy your part of the country. We are at work at sea once again.

All the very best,
Lois <-- in Port Canaveral today enjoying my Internet connection since it's Sunday.

Been ages since I stopped by to say hello.
Coy,you still have the best wild life photos.
How wonderful to have Chad visiting and getting to do a photo shoot with his Dad.